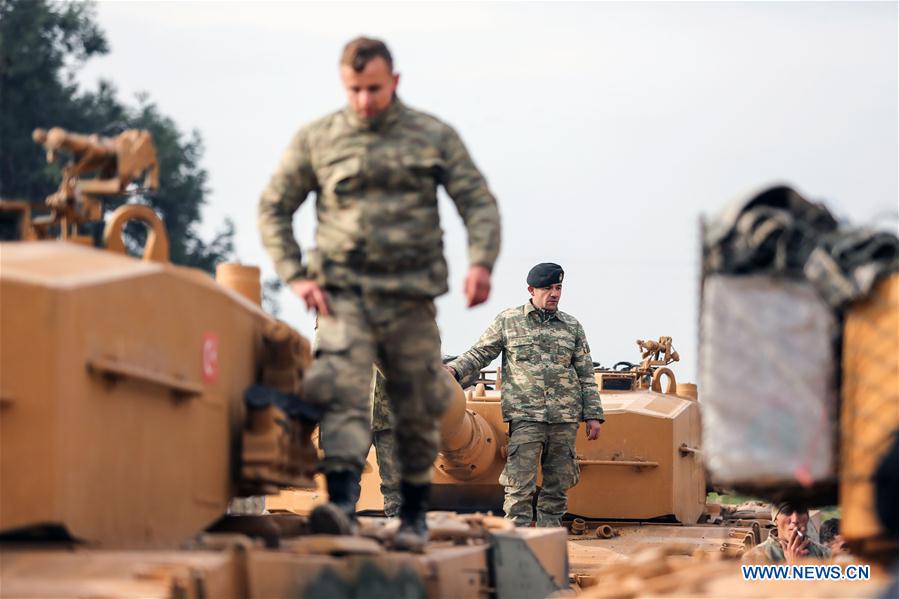 Turkish soldiers prepare their armored vehicles near the Syrian-Turkish border at Reyhanli district in Hatay, Turkey, on Jan. 21, 2018. Turkish ground troops entered Syria's Afrin Sunday on the second day of an offensive against U.S-backed Kurdish militia which should be wrapped up soon, said Turkish President Recep Tayyip Erdogan. (Xinhua)

Turkey on Saturday launched the operation dubbed "Operation Olive Branch" with intense air raids and shelling seeking to oust from the Afrin region of northern Syria the Peoples' Protection Units (YPG), which Ankara considers as a terror group affiliated to the Kurdistan Workers' Party (PKK).

Ankara has been angered by the YPG's expansion in northern Syria, fearing that it may create a de facto state at its border and declared its military offensive as a measure to protect local populations in Afrin from the clutches of sectarian Kurdish ambitions.

Turkish Prime Minister Binali Yildirim told press in Istanbul that troops had crossed into the YPG-controlled region in Syria at 11:05 a.m. local time (0805 GMT) from Turkey.

Turkish artillery and warplanes pounded YPG sites around Afrin and a total of 153 targets, including YPG refuges and ammunition depots, have been hit, according to a statement of the army.

The state-run Anadolu Agency said the Turkish troops were advancing alongside forces from the pro-Ankara rebel Free Syrian Army (FSA) and were already 5 km inside Syria by Sunday afternoon.

Erdogan hailed the Turkish military's operation on Sunday during a political rally in the northwestern province of Bursa, saying that "YPG is on the run."

He also said that this operation will be completed "in a very short time" without giving a precise time limit.

The operation is Turkey's second major incursion into Syria during the seven-year civil war after the Euphrates Shield Operation between August 2016 and March 2017 in an area to the east of Afrin against both the YPG and Islamic State (IS) fighters.

The army said IS, widely defeated in Syria and Iraq, was also being targeted in this operation.

Erdogan had repeatedly vowed that Turkey would root out the "nests of terror" of the YPG in Syria.

Afrin is an enclave under YPG control, cut off from the longer strip of northern Syria that the group controls to the east extending to the Iraqi border. Turkey wants the YPG to retreat from the east of the Euphrates River, so as "not to pose a security threat."

Meanwhile, six rockets fired by the YPG hit the border towns of Kilis and Reyhanli on Sunday, killing one Syrian immigrant and injuring some 30 people, according to local officials.

Turkey also launched a diplomatic campaign in Ankara to explain the reasons of the operation to major powers, a Turkish source told Xinhua.

The Foreign Ministry said it had informed Damascus, but the Syrian regime, which is at odds with Turkey, strongly denied this, denouncing the operation as a "brutal aggression."

There was no immediate comment from the United States on the offensive, but ahead of its launch, a senior U.S. State Department official had raised concerns it risked harming regional security.

Russia, who is a key player in Syria and has a military presence in the area, has not yet expressed a clear position about the Turkish operation while experts insist that Moscow have given Ankara a tacit green light.

The Russian Foreign Ministry voiced concern and urged Turkey to show restraint. And the Russian Defence Ministry said its troops were withdrawing from Afrin to ensure their security and prevent any "provocation."

"Russia may have indeed given a green light for the moment, but it does not mean that Moscow will disregard totally the Syrian Kurdish militia," noted Russia expert, Kerim Has, from the University of Moscow. He believed that Russia will play a role in the political reconstruction of Syria.

The United States, Turkey's NATO ally, has warned against the operation against the YPG to whom it is lending military support in the fight against IS, a move that has fiercely angered Ankara.

Turkey who has strained ties with Washington has vehemently denounced U.S. plans to help build a Kurdish-led "border security force" in Syria, accusing that it would place a "terrorist army" at Turkey's gates.

Erdogan said in Bursa that the YPG militia cannot rely any more on U.S. support to defeat Turkey, and accused some of Turkey's allies without naming, but clearly referring to Washington, of having provided "planeloads and truckloads of weapons and ammunition to the terrorists."