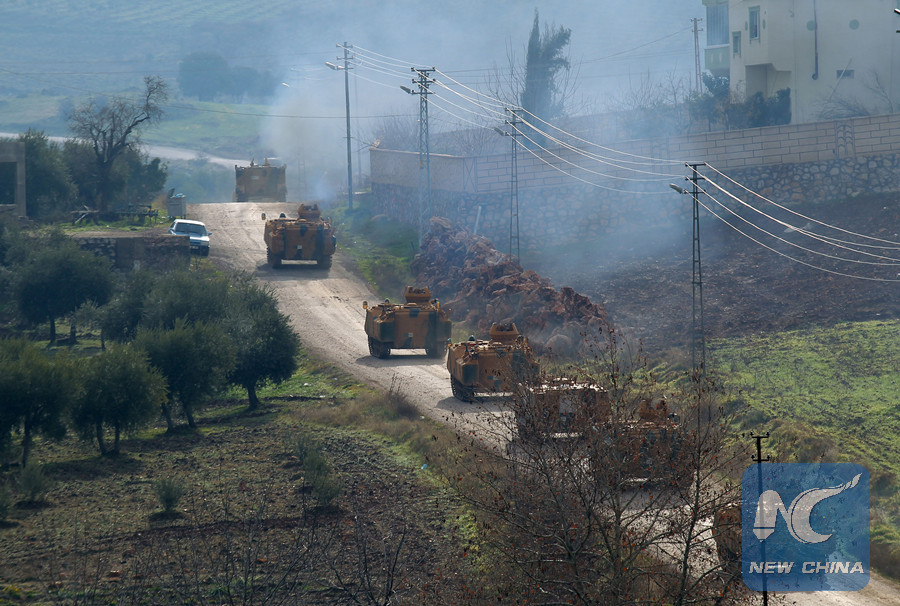 Turkey sent ground forces into Afrin in northwestern Syria on Sunday morning on the second day of the so-called Operation Olive Branch, following one-day artillery and air strikes on targets of the Kurdish militia known as the People's Protection Units (YPG).

"Hopefully, we will complete this operation in a very short time," Erdogan said in a speech in the western city of Bursa.

The president also made a threat against the pro-Kurdish Peoples' Democratic Party and an urban branch of the Kurdistan Workers' Party (PKK), saying he had news about the groups taking to the streets.

"Our security forces are at your neck wherever you are," he cautioned.

Ankara sees the YPG as the Syrian offshoot of the PKK which has been fighting against the Turkish state for more than 30 years. The U.S., however, has been offering military support to the Kurdish militia and even suggested days ago the establishment of a border security force in northern Syria to be dominated by Kurdish fighters, infuriating Turkey and chilling bilateral ties further.

Turkey has long broached the idea of a military intervention into Afrin, one of the three cantons carved out by the YPG during the Syrian civil war.

As he announced the start of the Afrin operation on Saturday, Erdogan also said the intervention will be extended next to Manbij in northern Syria.

Turkey is seeking to establish a 30-km security zone through the Afrin operation, and the four-phase offensive will be done "in a very rapid manner," Turkish Prime Minister Binali Yildirim said on Sunday.

Turkish Deputy Prime Minister Bekir Bozdag said the operation will continue until "all the terror elements are removed," which he said include the PKK, YPG and the Islamic State.

"I cannot give you the details about the number of soldiers taking part in the operation, but I can say that it is enough to clear the region of the terrorists," Bozdag told the foreign press in Istanbul.

"We can not pronounce how long the operation will take, talking about the duration of the operation is not appropriate," he said. "Our aim is to terminate the operation as soon as possible."

He said Turkey will turn over the region to "its real owners" once the intervention is completed and that there is no possibility of a clash with the U.S. in the field.

Turkey launched what it called Operation Euphrates Shield in northern Syria from August 2016 to March 2017, seizing several towns in its efforts to drive the Islamic State away and prevent the Kurdish cantons from uniting along the Turkish border.