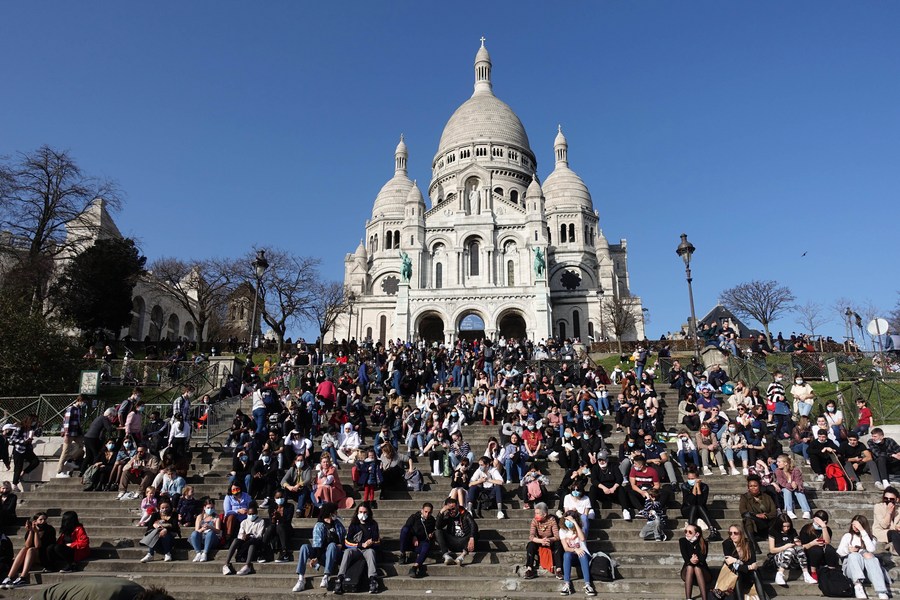 People enjoy the sunshine in front of the Sacre Coeur Basilica atop the Montmartre in Paris, France, Feb. 24, 2021. (Xinhua/Gao Jing)

The number of people who lost their lives to the coronavirus increased by 322 to reach 87,542, the seventh highest in the world.

PARIS, March 3 (Xinhua) -- A total of 3,810,316 people in France have been diagnosed with COVID-19 after 26,788 positive cases were confirmed in the past 24 hours, the biggest daily increase since Feb. 24, official figures showed on Wednesday.

The number of people who lost their lives to the coronavirus increased by 322 to reach 87,542, the seventh highest in the world.

These data marked "not an exponential rise but a continuous and worrying increase," government spokesperson Gabriel Attal said early Wednesday after a weekly cabinet meeting.

"Vaccinating the most vulnerable is protecting hospitals, is to give us a chance to be able to ease as quickly as possible the restrictions which weigh on our daily life," Attal told reporters. 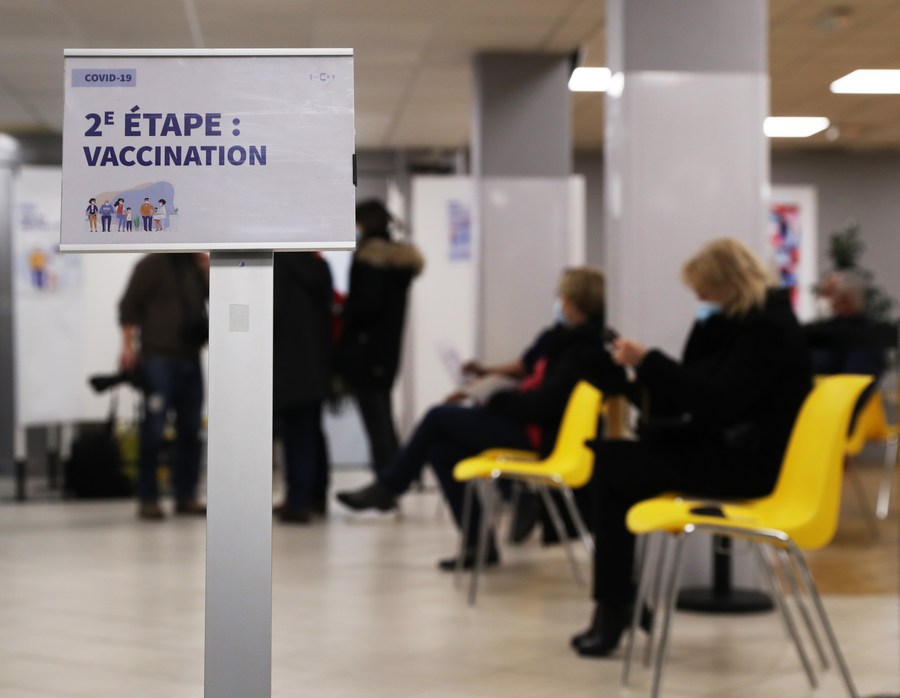 Senior citizens wait before receiving a dose of COVID-19 vaccine at a temporary vaccination center on the first day of its opening, in Clichy, France, Jan. 18, 2021. (Xinhua/Gao Jing)

"It is neither a distant nor uncertain horizon. It is a horizon that is getting closer and closer. We hope maybe from mid-April (we will ease restrictions), and we are preparing for it," he said.

Attal added that President Emmanuel Macron has asked his ministers to propose plans allowing "a cautious re-opening of the country soon."

Prime Minister Jean Castex will hold a news conference on Thursday to present an update on the country's epidemic indicators and possible remedies to the virus resurgence.

Unlike some of its neighbors, France has decided against a new lockdown, betting on nightly curfew and vaccination campaign to bring the epidemic under control.

A night-time ban on people's movement, in force since mid-December, was brought forward by two hours in the French territory on Jan. 16 to reduce social mixing. 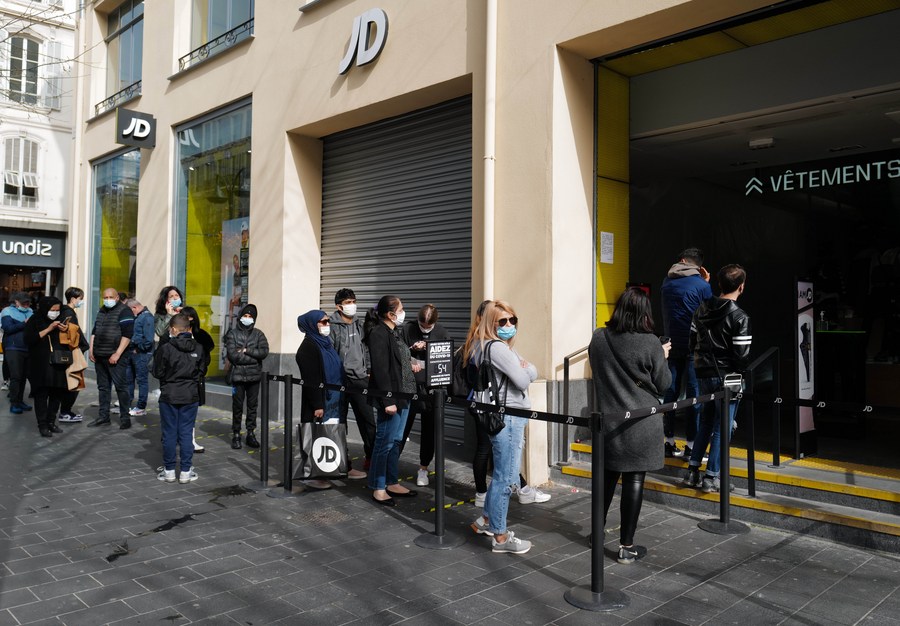 People line up to enter a boutique in Nice, capital of the coastal department of Alpes-Maritimes, southern France, on Feb. 23, 2021. (Photo by Serge Haouzi/Xinhua)

As the situation worsened in some regions notably in the southeastern department of Alpes-Maritimes and the northern coastal area in Dunkirk, the government has introduced weekend lockdown to contain the virus spread.

Twenty other regions, including Paris and its surrounding suburbs, are also under the watch due to deteriorating sanitary indicators that may imply further restrictions including partial lockdown.

As of Wednesday, 3,133,478 people in France have received at least one dose of vaccine against the coronavirus, according to government data website.

As the world is struggling to contain the pandemic, vaccination is underway in an increasing number of countries with the already-authorized coronavirus vaccines.

Meanwhile, 258 candidate vaccines are still being developed worldwide -- 76 of them in clinical trials -- in countries including Germany, China, Russia, Britain, and the United States, according to information released by the World Health Organization on Tuesday. 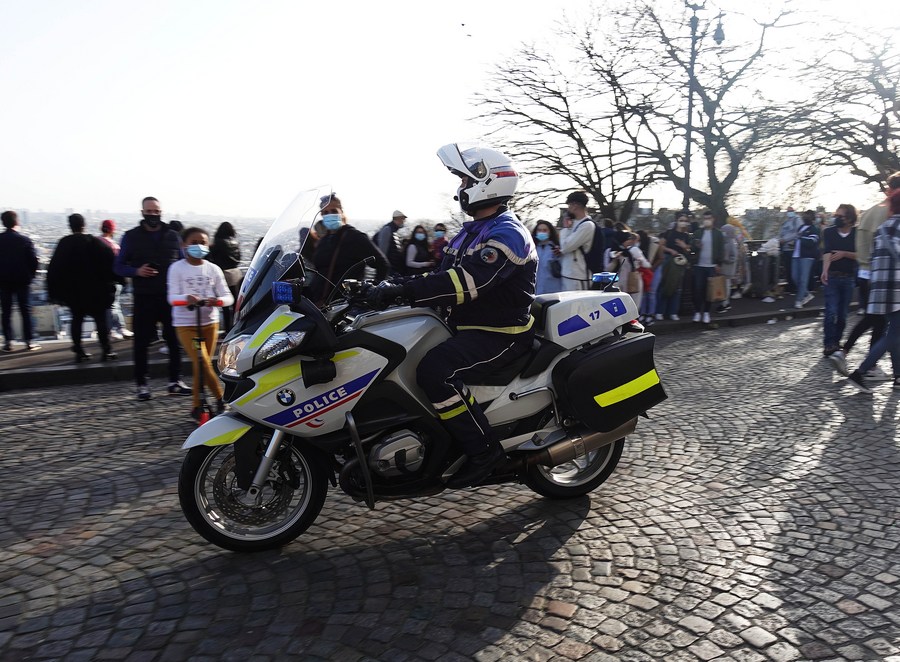 A policeman talks with people in front of the Sacre Coeur Basilica atop the Montmartre in Paris, France, Feb. 24, 2021. (Xinhua/Gao Jing)■