Xinhua Headlines: A tale of vanquishing poverty from southwest China

-- Southwest China's Wumeng Mountains span over 100,000 square km in the provinces of Yunnan, Guizhou and Sichuan. Most residents were marred by poverty, with their per capita income only a quarter of those living in the eastern coastal areas.

-- The days of destitution are now over. Thanks to China's poverty alleviation efforts, the locals have bidden farewell to penury with their hometowns undergoing dramatic transformations.

KUNMING, March 2 (Xinhua) -- The hinterland in southwest China's Wumeng Mountains had long been pauperized by a hostile environment, with more than 30 million people inhabiting the region reeling under treacherous terrain and water scarcity.

The mountain ranges span over 100,000 square km in the provinces of Yunnan, Guizhou and Sichuan. Most residents were marred by poverty, with their per capita income only a quarter of those living in the eastern coastal areas.

However, the days of destitution are now over. Thanks to China's poverty alleviation efforts, the locals have bidden farewell to penury with their hometowns undergoing dramatic transformations. 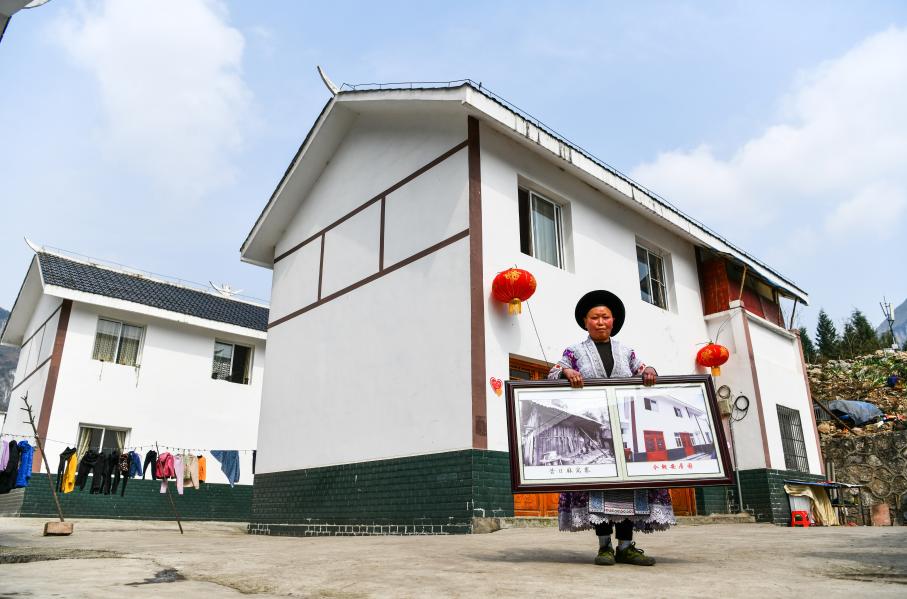 A woman standing in front of her new residence shows photos of her houses before and after the relocation at the relocation site for poverty-stricken people in Huawu Village in Qianxi County, southwest China's Guizhou Province, Feb. 20, 2021. (Xinhua/Yang Wenbin)

Mou'se Labo's hometown in Atulieer Village of Sichuan Province is dubbed "cliff village" by locals due to its location on a cliff over 1,000 meters above sea level.

In the past, villagers could only access the outside world through a narrow ladder made of vines and wood laid on the rugged, steep mountains. People had to use both their feet and hands to climb up and down while bearing the risk of slipping off the cliff.

Recalling his ordeal, Labo said once his sister-in-law had suffered from dystocia and massive hemorrhage and had to be immediately rushed to a hospital outside the village. However, the journey was too long and she died on someone's back while being carried down the mountain.

In August 2016, reconstruction work on the ladder kicked off as part of a poverty alleviation campaign. And eight months later, a firm, steel ladder with 2,556 steps took shape, built with some 6,000 steel pipes.

Other facilities including communication base stations, power grids and optical cables were gradually installed. Refrigerators and washing machines were carried into villager's homes through the new ladder. 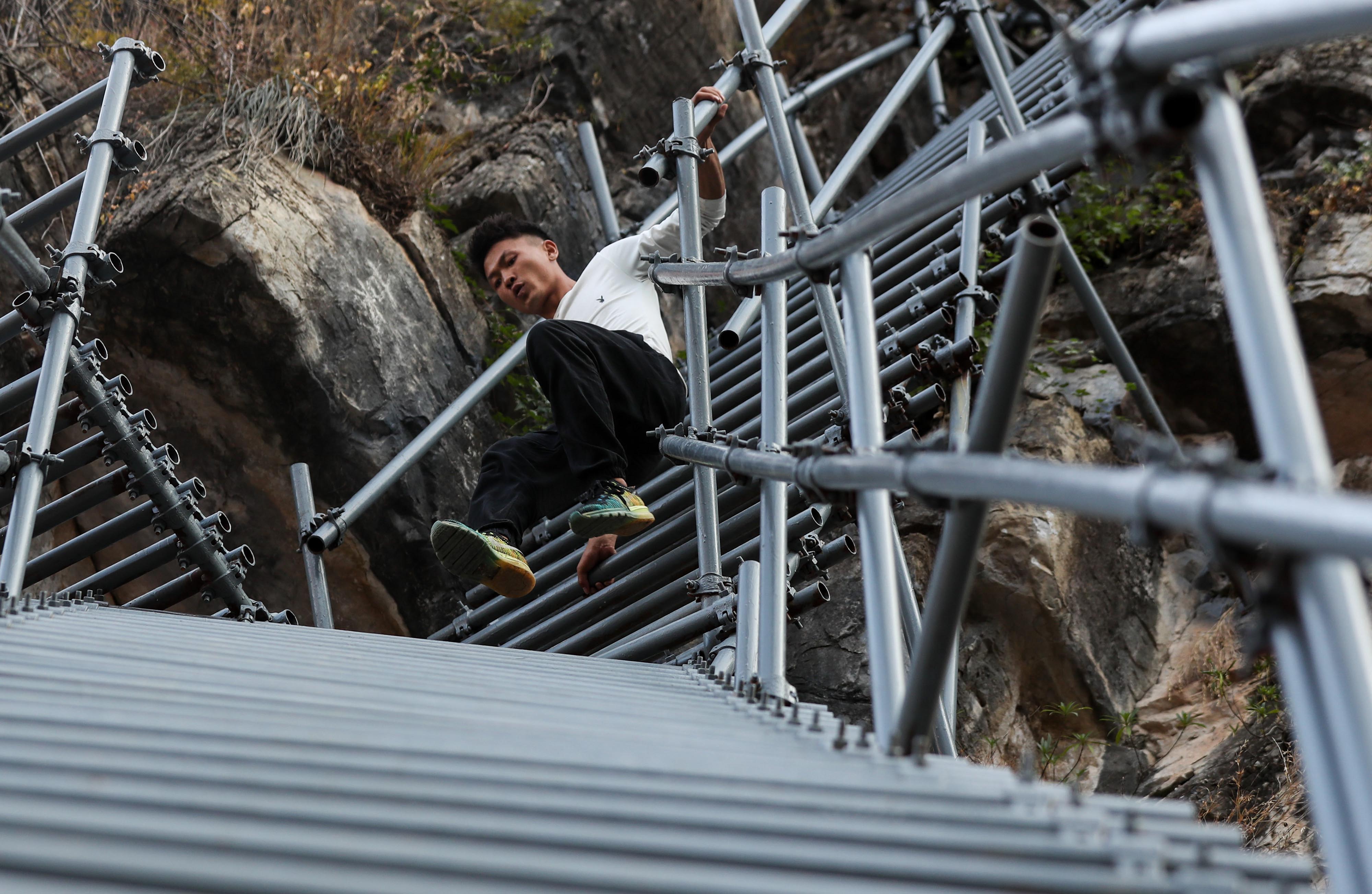 Meanwhile, Labo realized he is gifted with a unique talent of sliding down from the top of the ladder to the bottom in just 15 minutes, owing to his agility. He soon began showcasing this talent through livestream using his mobile phone. His videos also helped popularize the scenic views of the village among people outside.

"Cliff village" soon went viral and boosted local tourism, prompting the local government to establish a tourism company and build a campsite. Labo was employed as a tour guide and keeper at the site, earning nearly 4,000 yuan (about 620 U.S. dollars) a month.

Coming from a registered poverty-stricken household, Labo was determined to earn a better livelihood for his family. So, he joined a training program in hotel management in Dali, a famed tourist city in Yunnan Province, learning to be a professional in the hospitality industry.

He said he is now eagerly awaiting the opening of a new highway scheduled to start operation in June. Leading directly to the campsite, the highway will encourage more people to visit his village.

In Yunnan Province, the Wumeng Mountains have long been impeding the development of Zhaotong, a city with 97 percent of its landmass in mountainous regions. The city had the largest share of poverty-stricken residents across the country.

Zhaotong launched a massive relocation project in 2018, building more than 370 relocation sites, in a bid to help some 360,000 people in the mountains move to more hospitable areas.

Most new homes are equipped with televisions, refrigerators and other household appliances -- utilities that were perhaps only fragments of imaginations for many farmers in the past.

Shao Guangqian from Yanjin County under Zhaotong said he is finally able to take a shower every day. Before moving to the relocation site, there was no tap water at home, and Shao could only shower once a week by fetching water from a stream.

Dong Bao from Jing'an District, a large-scale resettlement area in Zhaotong, was seen busy distributing packages before the Spring Festival. 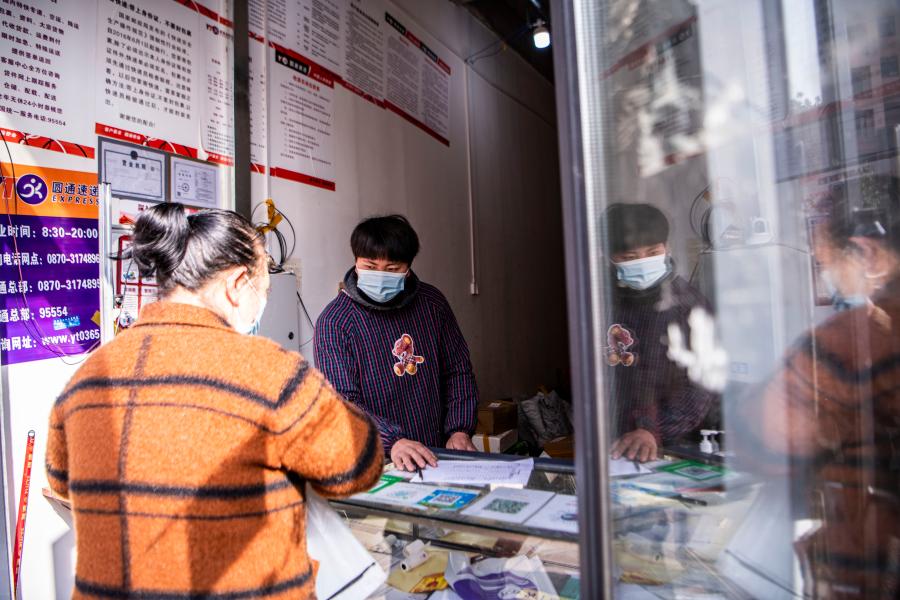 In 2020, he had moved from a nearby village to the district and opened a package delivery store there. Today, hundreds of packages arrive and are dispatched from the store every day.

The 26-year-old used to be a migrant worker in central China's Henan Province, but the relocation project has paved the way for him to live a better life near home.

Zhaotong has also come up with ways to capitalize arable lands, woodlands and house sites in new relocation sites. Meanwhile, poverty-eradication workshops and industrial bases and parks have been established, providing nearly 50,000 jobs to locals. 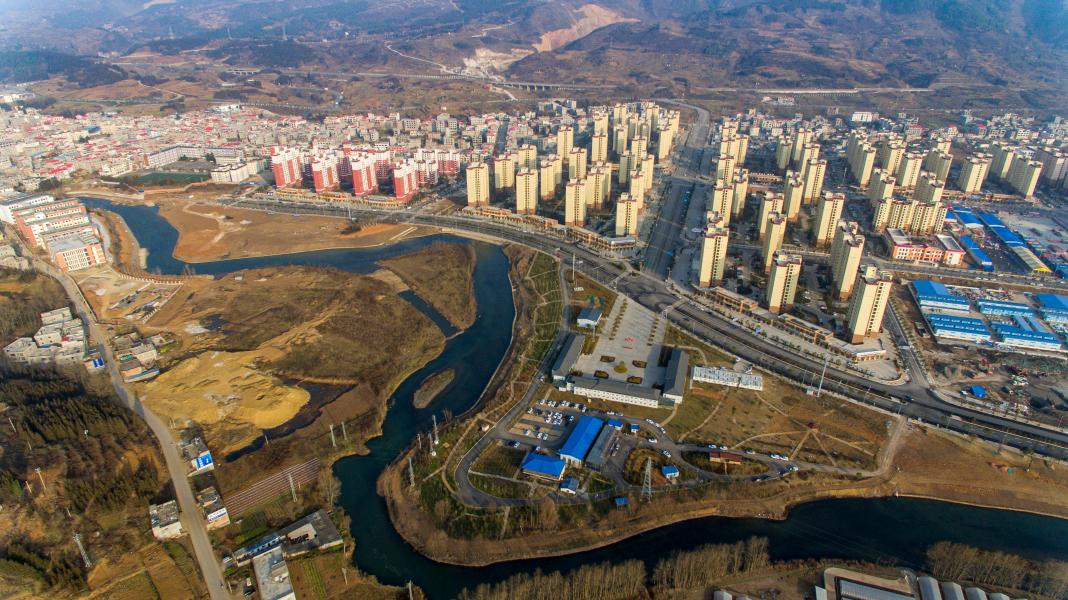 In the Guizhou section of the Wumeng Mountains, local governments have taken advantage of the unique ethnic cultures to attract more tourists.

Huawu Village in Qianxi County had a poverty headcount ratio as high as 63.6 percent. However, it boasts splendid mountains views and vast water bodies, in addition to a unique ethnic Miao culture.

Based on the resources, the village established a scenic area on the theme of "miles-long gallery" as a targeted measure to shake off poverty.

"Many of our traditional Miao customs, such as singing folk songs in the mountains, appeal to visitors," said Yang Yan, a local villager. Besides, tourists are welcomed to join villagers at their homes to make Ciba, a round-shaped glutinous rice cake. Sales of traditional embroidery products are also on the rise.

By the end of 2019, all households in Huawu Village had been removed from the poverty list. 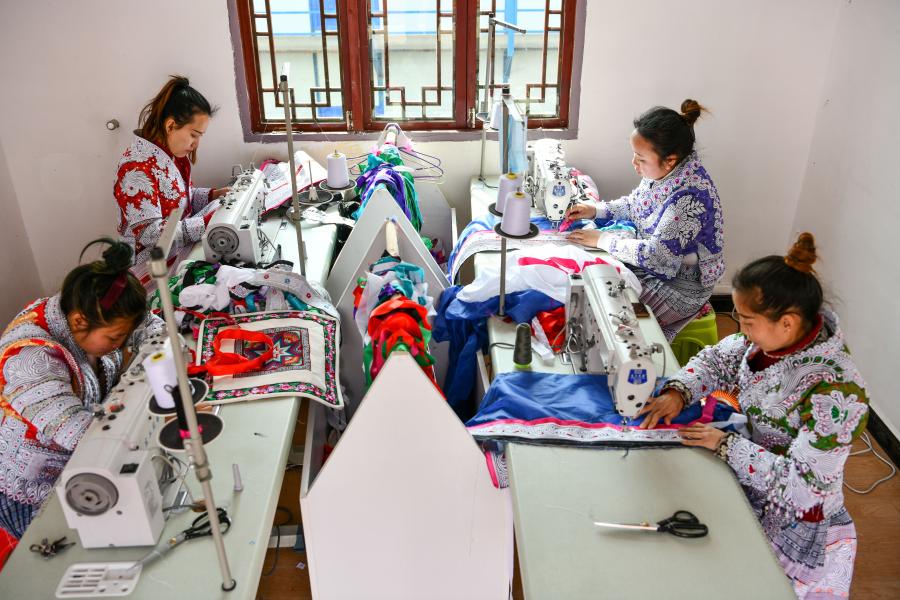 The village that once had no roads, tap water or electricity supply and was isolated from the outside world is now bustling with tourists.

During this year's Spring Festival holiday, the village received nearly 200,000 tourists, with all the homestays and hotels fully booked, bringing in nearly 100 million yuan in revenue.