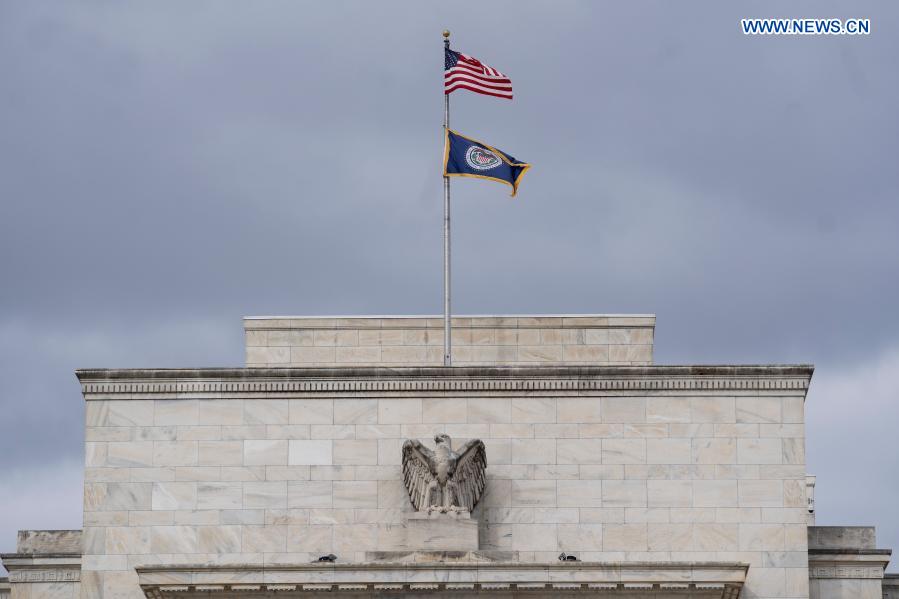 Photo taken on Jan. 27, 2021 shows the U.S. Federal Reserve in Washington, D.C., the United States. The U.S. Federal Reserve on Wednesday kept its benchmark interest rate unchanged at the record-low level of near zero, as the country grapples with slowing economic recovery amid surging COVID-19 cases. (Xinhua/Liu Jie)

WASHINGTON, Jan. 27 (Xinhua) -- The U.S. Federal Reserve on Wednesday kept its benchmark interest rate unchanged at the record-low level of near zero, as the country grapples with slowing economic recovery amid surging COVID-19 cases.

"The path of the economy continues to depend significantly on the course of the virus," Fed Chairman Jerome Powell said at a virtual press conference Wednesday afternoon.

"A resurgence in recent months of COVID-19 cases, hospitalizations and deaths is causing great hardship for millions of Americans and weighing on economic activity and job creation," Powell continued.

The Fed chief noted that following a sharp rebound in economic activity last summer, the pace of the recovery has "moderated" in recent months, with the weakness concentrated in the sectors most adversely affected by the resurgence of the virus and greater social distancing.

"The economy is a long way from our employment and inflation goals, and it is likely to take sometime for substantial further progress to be achieved," Powell said.

After concluding its first policy meeting of 2021, the Fed decided to maintain the target range for the federal funds rate at 0-0.25 percent.

Noting that inflation has been running persistently below the Fed's 2-percent longer-run goal, the Federal Open Market Committee (FOMC), the Fed's policy-making body, said in a statement released Wednesday afternoon that it will aim to achieve inflation moderately above 2 percent for some time so that inflation averages 2 percent over time.

Noting that the pace of improvement in labor market has slowed in recent months, Powell said participation in labor market is below pre-pandemic levels, and real unemployment rate is close to 10 percent, with some 9 million Americans still out of work due to the pandemic.

"The economic downturn has not fallen equally on all Americans," said the Fed chair. "In particular the high level of joblessness has been especially severe for low wage workers in the service sector and African-Americans and Hispanics."

Calling fiscal policy "absolutely essential," Powell said the overall recovery in economic activity since last spring is due in part to federal stimulus payments and expanded unemployment, which provided essential support to many families and individuals.

The Fed chief, however, continued to refrain from giving Congress advice on specific policies, when asked about further fiscal stimulus.

"The judgment on how much to spend and in what way is really one for Congress and the administration and not for the Fed, and these discussions are going on right now," he told reporters.

Despite the challenges, Powell said several developments point to improved outlook for later this year.

"Sufficiently widespread vaccinations would enable us to put the pandemic behind us and return to more normal economic activities," he said. "In the meantime, continued observance of social distancing and wearing masks will help us reach the goal as soon as possible." Enditem