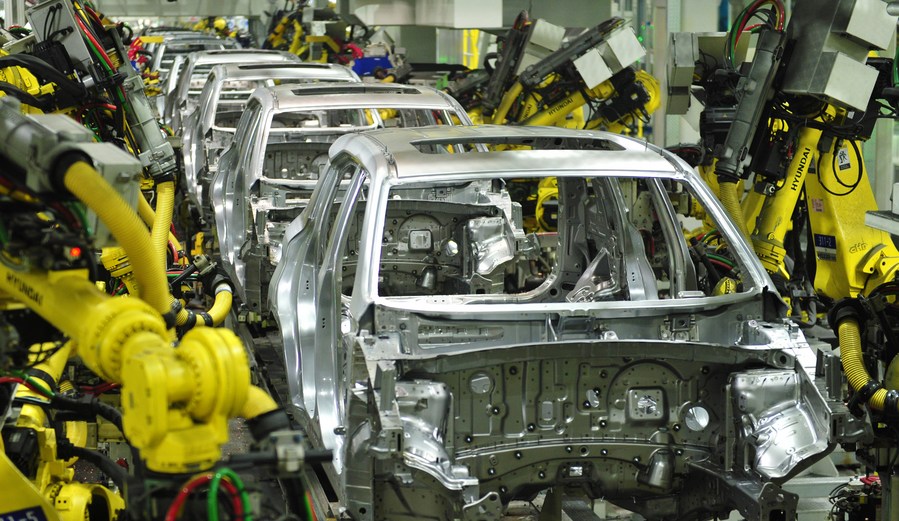 Photo taken on Dec. 9, 2020 shows a production line in the car body workshop of the Beijing-Hyundai Works in Cangzhou City of north China's Hebei Province. (Photo by Yuan Liwei/Xinhua)

In 2020, the profits of major industrial firms with an annual business turnover of at least 20 million yuan rose 4.1 percent year on year to more than 6.45 trillion yuan.

In 2020, the profits of major industrial firms with an annual business turnover of at least 20 million yuan (about 3.09 million U.S. dollars) rose 4.1 percent year on year to more than 6.45 trillion yuan, the NBS data shows.

Hit by the COVID-19 epidemic at the beginning of last year, these firms saw their profits decline by 36.7 percent year on year in the first quarter.

But profits rebounded in the second quarter, increasing 4.8 percent year on year as companies steadily resumed work and production. Profits surged 15.9 percent and 20.8 percent in the third and fourth quarters, respectively, as economic recovery accelerated.

In December alone, the profits of these major industrial firms surged 20.1 percent year on year, registering double-digit growth for a seventh consecutive month.

Profits in the mining industry sank 31.5 percent from a year earlier, while the manufacturing industry saw a 7.6 percent rise, and firms involved in the production and supply of electricity, thermal power, gas and water registered a 4.9 percent year-on-year increase.

Profits in 26 of 41 surveyed industrial sectors rose from the previous year, and 15 sectors saw their profits fall, according to the NBS.