Feature: Tears and applause as fans bid farewell to Maradona 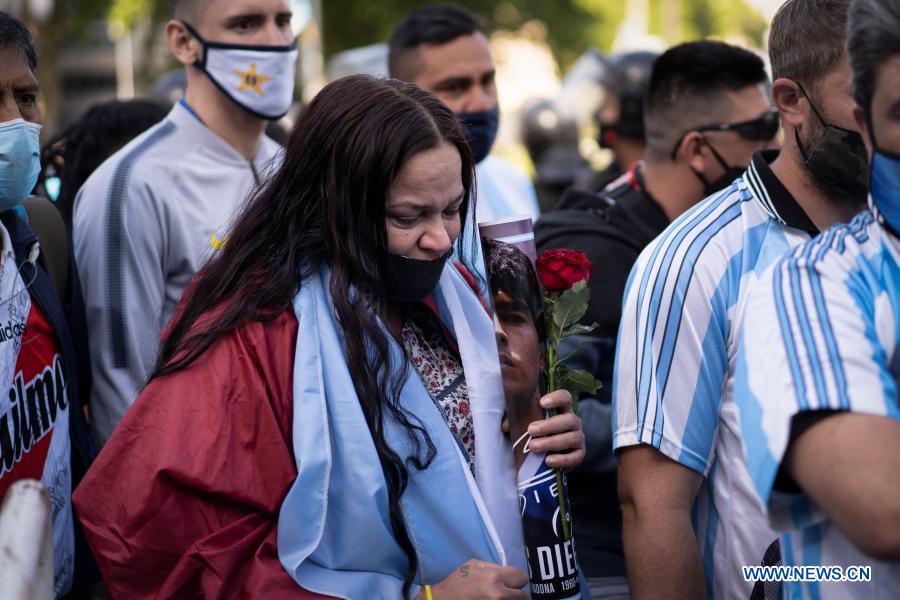 Fans wait outside the funeral chapel of football legend Diego Maradona at the Casa Rosada in Buenos Aires, capital of Argentina, Nov. 26, 2020. Maradona died at the age of 60 on Wednesday of a heart attack. (Photo by Martin Zabala/Xinhua)

BUENOS AIRES, Nov. 26 (Xinhua) -- Thousands of people bid farewell to the late football great Diego Maradona on Thursday, as his remains were laid in state at the presidential headquarters of Casa Rosada in Buenos Aires.

Many fans cried, some applauded and others left tokens of gratitude as they filed past Maradona's coffin after waiting patiently in long lines to enter the building, which opened at 6 a.m. local time for a ceremony expected to last 10 hours.

Inside Casa Rosada, most of the visitors burst into tears as they passed in front of the coffin, which was covered with the Argentine flag and two football jerseys, one belonging to the national team and the other to Boca Juniors, with his emblematic No. 10.

But fans of all stripes showed up, including those of Maradona's traditional rival team, River Plate, and of Italy's Napoli, where the former footballer shone.

"Diego will live forever in the hearts of Argentinians," Roberto Orellana, 42, told Xinhua.

Another visitor, Claudia Pintos, told Xinhua through tears that "Diego is Argentina."

In fact, much of the world learned about Argentina because of the player's fame, said Pintos.

"They came to know us through Diego," he said.

Nelly Varela, who also came to pay her respects, said Maradona was universally loved, not just at home, but also abroad.

"In this country, wherever you went, Maradona was there. He was the greatest, he was the pride of the whole country and of many countries around the world. We will remember him forever," said Varela.

Maradona died at his home in the northern outskirts of Buenos Aires on Wednesday at the age of 60, after suffering a heart attack.