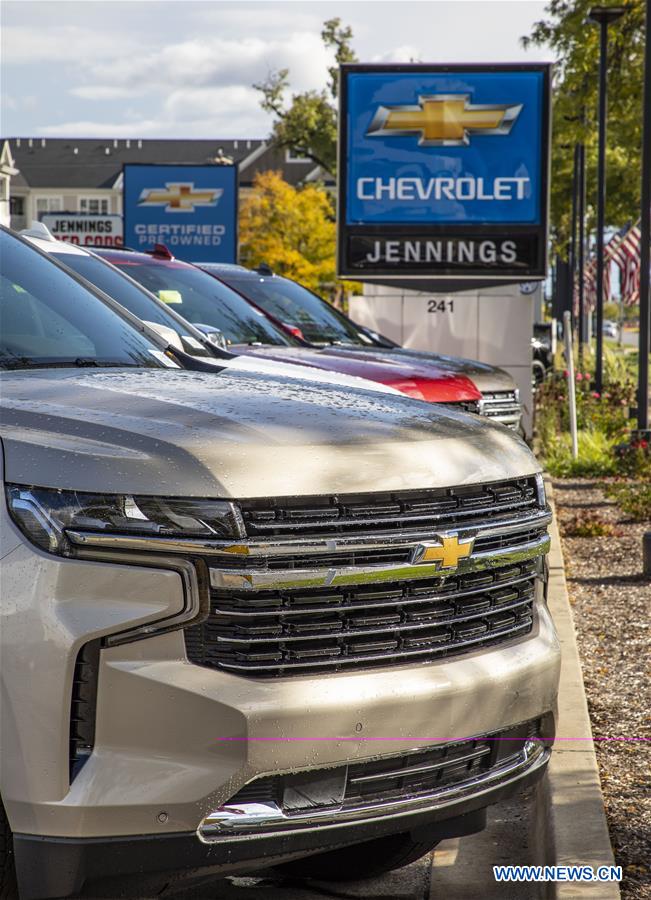 Vehicles are seen at a Chevrolet dealership in northern suburbs of Chicago, Illinois, the United States, on Oct. 1, 2020. Sales of new vehicles of General Motors Co. (GM) and Fiat Chrysler Automobiles (FCA) dropped 10 percent year over year in the third quarter of this year, according to the quarterly sales results posted on the websites of the automakers. (Photo by Joel Lerner/Xinhua)

CHICAGO, Oct. 1 (Xinhua) -- Sales of new vehicles of General Motors Co. (GM) and Fiat Chrysler Automobiles (FCA) dropped 10 percent year over year in the third quarter of this year, according to the quarterly sales results posted on the websites of the automakers.

GM sold 665,192 vehicles in the third quarter, and the sales improved sequentially each month within the quarter. GM sales actually rebounded significantly in September, finishing the month with year-over-year sales increases.

GM's large pickup trucks sold well, with Chevrolet Silverado heavy-duty truck sales up 9 percent and GMC Sierra heavy duty up 11 percent in the third quarter compared to a year ago. Total Sierra sales posted its best third quarter ever with more than 67,800 sales.

FCA sold 507,351 vehicles in the third quarter. While its profit-heavy Jeep and Ram brands sales went down 9 percent and 2 percent, Jeep Gladiator mid-size truck sales increased by 37 percent; and Chrysler sales increased by 8 percent in sales.

Meanwhile, as the sales of automakers in the United States dropped, the available supply of new vehicles continued to fall since COVID-19 started to hit the United States hard in March when inventory levels were above 3.4 million, the Detroit News quoted Cox Automotive, a U.S.-based industry research agency with more than 40,000 auto dealer clients across five continents. By mid-September, the inventory levels were below 2.2 million.

For the full year of 2020, Cox Automotive analysts predict 13.9 million sales after five consecutive years of sales hitting more than 17 million. Of the 13.9 million, 12 million are expected to be retail sales.

"While the economy has made a substantial rebound in the third quarter, retail auto sales have been even more resilient," GM Chief Economist Elaine Buckberg said in a statement. "Super low auto loan interest rates have boosted retail auto sales; yet more strength comes from pandemic-induced demand."

GM listed some of the pandemic-induced auto demand drivers: consumers see private vehicles as a safe space for both local and long-distance trips, as indicated by surveys from McKinsey and Company and Ipsos; some households that are confident in their finances are likely using savings from foregone vacations, entertainment and restaurant meals toward a new vehicle; city residents have increased interest in owning a vehicle as some seek to move to the suburbs and others want to escape the city on weekends; and sharp rebound in housing permits is a positive signal for overall auto demand.