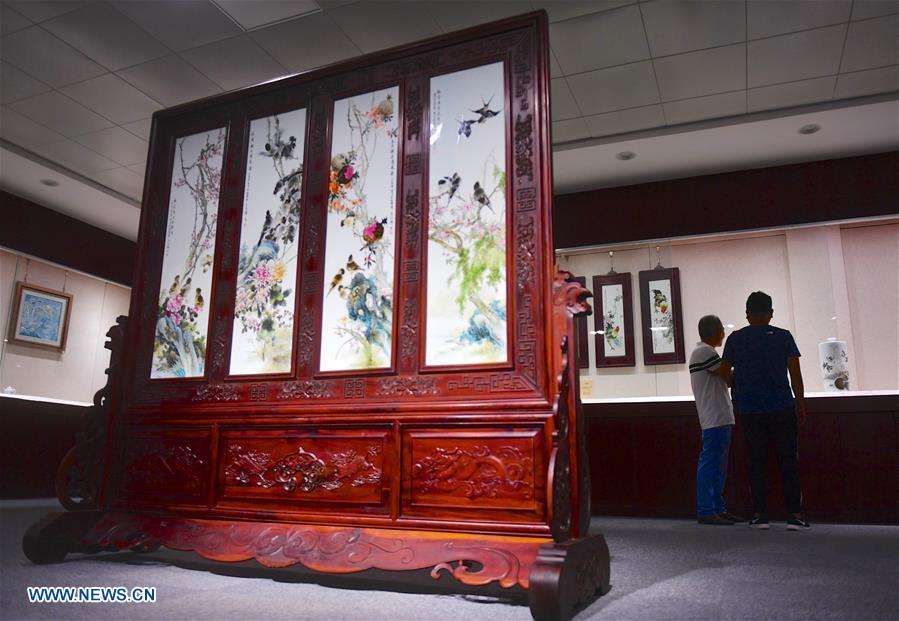 Mao Guanghui (L) introduces his creations to a visitor at the exhibition hall of a ceramic research institute in Jingdezhen, east China's Jiangxi Province, July 31, 2019. Mao Guanghui, a 56-year-old senior master of arts and crafts in Jiangxi Province, has been devoting himself to porcelain painting since the age of 13. As a third-generation disciple of Deng Bishan (1874-1930), one of the "Eight Friends of Zhushan", a group of Jingdezhen artisans widely noted for their innovations in porcelain painting, Mao inherited not only the skills but also the art of creating porcelain painting pieces. The subject matters like birds he specialized in embody the spirit of human beings, which is demonstrated in the roosters he painted, either vigorous or full of masculinity. Because of the excellent craft in his painting, Mao has received a series of accolades for his work, such as China Arts and Crafts Award and Gold Award of Chinese Craftwork Exhibition. Mao's continuous research on porcelain painting in recent years has come to fruition. His design patterns like flowers and birds bear elegance and exquisiteness, which have become an example for his peers to study. So far, Mao has trained more than 50 apprentices, all of whom are working at the frontline of porcelain painting in Jingdezhen and some of whom have earned the same titles as Mao. From Mao's perspective, his apprentices should regard porcelain painting not only as an occupation to make a living, but also as a Chinese art form they need to pass on from generation to generation. Speaking of the artisanal spirit, Mao claimed that the reputed status of Jingdezhen as the ceramic capital of the world lies in the inheritance and innovation in the porcelain making that numerous artisans have been tirelessly pursuing for thousands of years, adding that those who chase perfection in both form and content and surpass predecessors in the fields of techniques are the people who keep artisanal spirit in mind. (Xinhua/Hu Chenhuan)