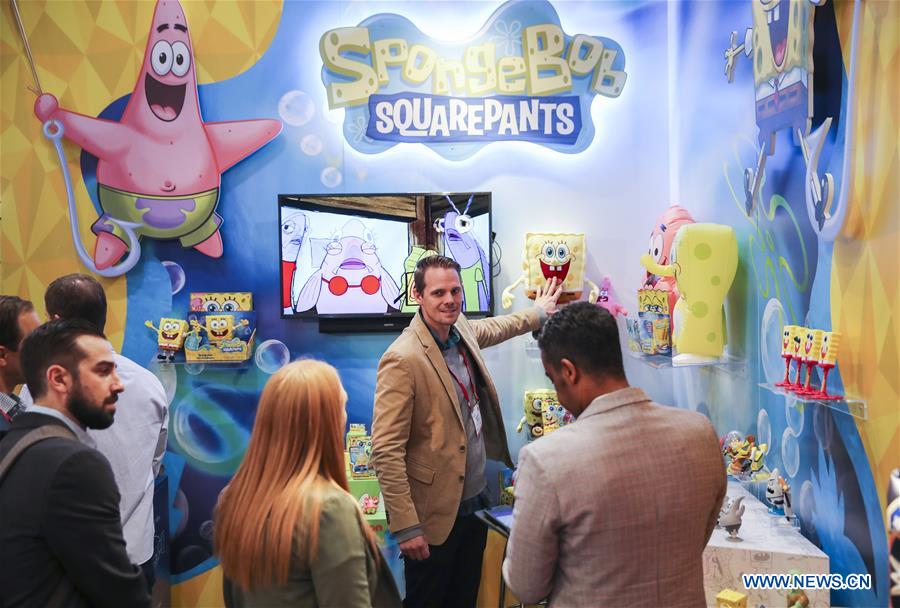 Visitors look at toy products of SpongeBob at the booth of Alpha Group Co., Ltd., a major animation, toy and entertainment player from Guangdong Province in southern China, during the 116th Annual North American International Toy Fair at the Jacob K. Javits Convention Center in New York, the United States, on Feb. 19, 2019. Chinese toy manufacturers, which produce around 75 percent of global toys each year, are rising up the value chain from the original role as contract manufacturers to designers and makers of their own brands. (Xinhua/Wang Ying)

NEW YORK, Feb. 20 (Xinhua) -- Chinese toy manufacturers, which produce around 75 percent of global toys each year, are rising up the value chain from original role as contract manufacturers by moving into designing and manufacturing products of their own brands.

TRANSFORMATION IN THE MAKING

"OEM (original equipment manufacturers) now is not a main business for us, though around 95 percent of Chinese toy producers still rely on OEM business," said Aaron Tong, sales manager with Playstream Education Limited, a subsidiary of Hangzhou ZT Model Company (HZTMC) based in Hangzhou, Zhejiang Province in east China, in an interview with Xinhua during the four-day New York Toy Fair that ended on Tuesday.

HZTMC, producer and developer of airplane model and junior-oriented hobby products, is now co-branding over 10 products in international markets with partners from Spain, Portugal, Australia and Britain, according to Tong.

The company intends to phase out co-branding in the next few years. Tong said, "Many customers want to cooperate with us on OEM basis and we don't agree on that."

Currently, HZTMC has over 200 employees including more than 30 researchers and engineering professionals, Tong said, and it is planning to hire more foreign professionals in 2019.

The Playsteam Education Limited has been registered in Britain for its designing team, he added.

According to Tong, HZTMC is expected to cooperate with a major U.S. toy player on the basis of co-branding for over ten products developed by HZTMC and they would be available in the North America market in about half a year.

"We've entered U.S. market for two to three years and our businesses are increasing," said Yu.

"I'm confident that we have absolute advantage by combining our production resources in China with overseas designing resources," said Yu.

Max Wong, regional sales supervisor with international business division of Rastar Group from Guangdong, said that about half of the businesses of the toy car maker came from the international market.

Rastar has established its presence in European and Asian markets for a long time and just started business in American markets, Wong said.

Listed on Shenzhen Stock Exchange in 2010, Rastar obtained the exclusive right to produce BMW car models in around 2006 and only export its products with its own brand, according to Wong.

"Co-branding is just the first step for sustainable development of Chinese toy companies and it's more important to have their own brands in international market, "said Tong.

China's toy industry is a buyers' market and it's hard for a toy plant without self-owned research and development capacity to refuse OEM business in partnering with overseas customers, said Tong.

Each year, many international big toy brands identify new products from China, buy out and label them with their own brands plus customized packaging and minor changes, Tong noted.

INTELLECTUAL PROPERTY IS THE KEY

Alpha Group's foray into international market as well as with other Chinese toy players' would help overseas consumers to be aware of the quality and development process with Chinese toy brands, said Yu.

"It's very important for foreign customers to know that China's toy producers have their own brands and do not only engage OEM businesses anymore," Yu said.

Previously Chinese toy products were cheap but now people can find everything with good quality, said Jafar Muhammad Penot, who came from French with a major in aerodynamics and joined the research team of HZTMC about two years ago.

China-based home appliance giants Haier Group and Hisense Co., Ltd. have set examples in moving up industrial value chain from OEM business to self-owned brands and factories outside China, according to an industry insider.

"One of the challenges for many Chinese companies is getting their intellectual property succeed outside China," Josh Selig, president of New York-based preschool content supplier Little Airplane Productions, told Xinhua.

Selig and his Chinese partners have made the animated TV series Super Wings a big success in China and also made China-born P. King Ducking broadcast on Disney Junior.

"We've had great success partnering with Chinese companies to make global quality shows. We find that if companies partner with us, they have a much better chance of having international broadcasters acquire the show," said Selig.

Ranked as the two largest toys markets in the world, the United States and China had 20.7 billion U.S. dollars and around 11 billion dollars of toy sales in 2017, respectively, according to Toy Association.

Chinese toy manufacturers' competitiveness no longer lies on low wages, but on high efficiency, research and development (R&D) capacity as well as quality, according to Qiu.

"Under most circumstances, Ty's R&D team just proposes an idea and Chinese manufacturers could realize it," Qiu on the sidelines of the toy fair.

Ty Inc. officially stepped into the Chinese market in late 2017 and sold some 2.5 million stuffed plush toys last year, according to Qiu.

The advent of overseas toy brands in China would prompt upgrading of its domestic consumption and changes of Chinese consumers' ideas on quality, requirement and even intellectual property, said Yu.

"I believe there's a natural synergy between Chinese and U.S. creators working together on global intellectual property. It's not enough for a show just to work in America or China," said Selig.