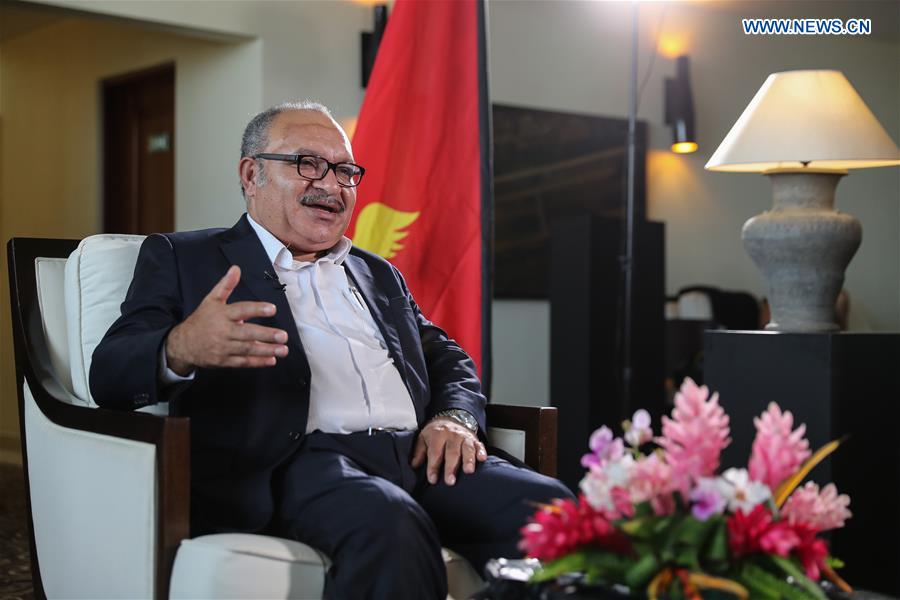 He spoke to Xinhua ahead of Chinese President Xi Jinping's upcoming state visit to PNG, which starts Thursday and will mark the first of its kind since the two countries established diplomatic ties 42 years ago. PNG attaches great importance to it, he said.

Noting that bilateral friendly exchanges date back to 150 years ago, O'Neill said the PNG-China relationship has been very cordial, strong and growing every year since 1976.

The two sides now share the same stances and values on many global issues, and PNG is committed to the one-China policy, said the prime minister.

Meanwhile, "businesses are starting to grow, a lot more investment is coming into Papua New Guinea as we speak, and of course more and more of our people are visiting China," said O'Neill, who has visited China for several times.

Speaking highly of the tremendous changes China has experienced since its reform and opening-up 40 years ago, he said, "I think China has had great development for its country and its people. It is something I don't think human history will ever repeat."

"Within a short period of time, you have been able to lift six or seven hundred million people out of poverty into a middle class. No other country in the world can achieve that, and this is a great example for any developing country, and we can learn from the success of China and build our own countries using that kind of experience and capacity," he added.

In May, PNG officially joined the Asian Infrastructure Investment Bank. During O'Neill's last visit to China in June, PNG became the first Pacific island country to sign a memorandum of understanding with China on BRI cooperation. Of that, O'Neill said he is very proud.

"I think that many countries in the region can benefit from the (Belt and Road) Initiative," he told Xinhua. "For international developing countries like Papua New Guinea, this is a great initiative because of the access to capital and infrastructure-building capacities that we are now developing together with China. It is able to open up markets and improve the standard of living for our people."

He noted that BRI cooperation projects have helped PNG build up a series of infrastructure like ports, roads and bridges for the benefit of the PNG people, particularly those living in remote areas, where many villages have been connected to the outside world by road for the first time.

"I think globally it will continue to promote trade and investment for all countries. So we support that," added the prime minister.

PNG also looks forward to boosting financial cooperation with China, said O'Neill, stressing that his county is one of the few developing countries that have never defaulted on debt and a cooperation partner with a good credit standing.

PNG is blessed with rich resources in fishery, agriculture, tourism, mining and petroleum; what it lacks is capital and market, he said. "We know that China has got a huge market for these resources, so it's pleasing to know that the Chinese business community has started to take an interest in Papua New Guinea and started to invest in PNG."

"At the same time, more and more of our citizens are going to work and live in China, and this is growing each year, so I think the future looks very bright," said the PNG prime minister.