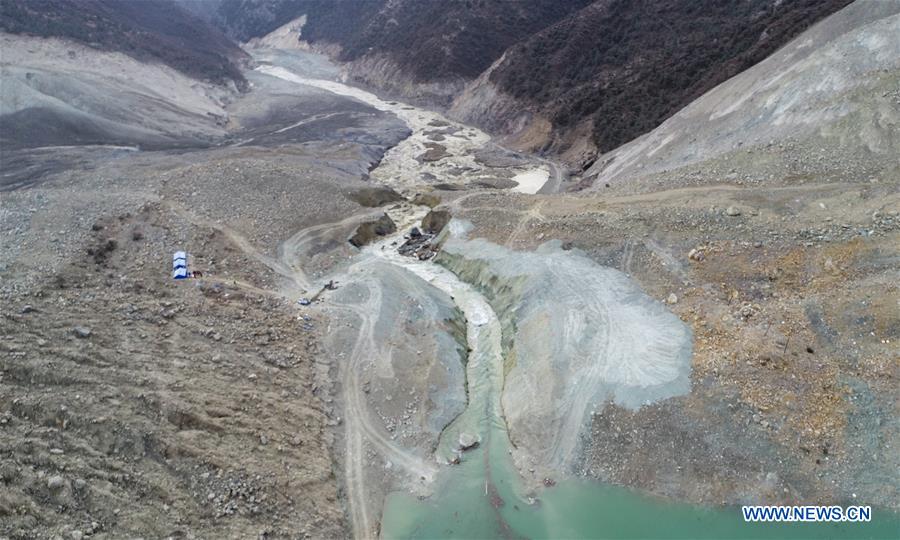 Aerial photo taken on Nov. 13, 2018 shows water of a landslide-caused barrier lake on the Jinsha River flows through a drainage channel in the border area between Sichuan Province and Tibet Autonomous Region in southwest China. A drainage channel constructed by disaster relief staff successfully resumed the flow of Jinsha River, which had been blocked by a barrier lake formed following a landslide that hit the area on Nov. 3. (Xinhua/Feng Yunhu)

BEIJING, Nov. 13 (Xinhua) -- Chinese authorities on Monday initiated a national emergency response after a landslide hit southwest China, leading to the formation of a barrier lake.

The China National Commission for Disaster Reduction and the Ministry of Emergency Management jointly activated a level-IV emergency response, the lowest level, on Monday, the ministry said in a statement.

A landslide hit the border area between Sichuan Province and Tibet Autonomous Region on Nov. 3, leading to the formation of a barrier lake blocking a section of the Jinsha River.

A joint work team had been dispatched to the barrier lake area to guide and assist emergency rescue work.

By 6 a.m. Tuesday, a total of 67,449 people had been relocated in Sichuan, Tibet and the neighboring Yunnan, according to local authorities.