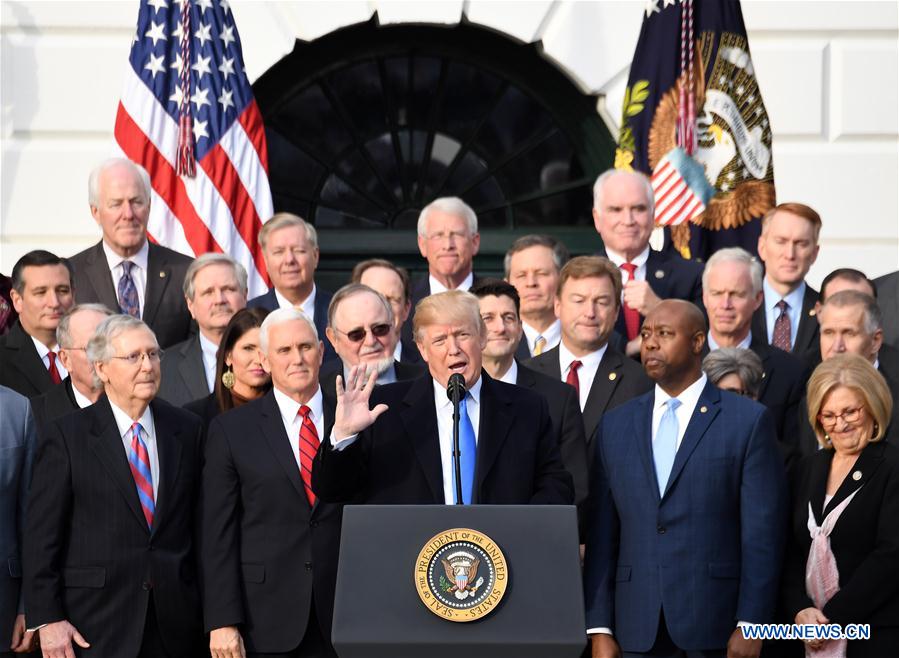 U.S. President Donald Trump (C) speaks at an event celebrating the passage of the tax bill on the South Lawn of the White House in Washington D.C., the United States, on Dec. 20, 2017. The U.S. Congress on Wednesday finally passed the Republican bill to overhaul the U.S. tax code over three decades, sending it to President Donald Trump's desk for signature, amid concerns that the change would widen income inequality and swell public debt. (Xinhua/Yin Bogu)

WASHINGTON, Dec. 20 (Xinhua) -- The U.S. Congress on Wednesday finally passed the Republican bill to overhaul the U.S. tax code over three decades, sending it to President Donald Trump's desk for signature, amid concerns that the change would widen income inequality and swell public debt.

The House on Wednesday voted 224-201 to approve the 1.5-trillion-U.S. dollar tax cuts package, which would impact nearly every part of the world's largest economy, affecting both large and small businesses, as well as families.

The House passed the tax bill Tuesday afternoon, but the Senate's parliamentarian found several provisions in the bill violated budget rules, forcing lawmakers to strip them out and requiring the House to vote again.

The Senate narrowly passed the revised bill Tuesday midnight with a vote of 51-48. Now the bill, without the support of a single Democrat in Congress, will be sent to Trump's desk for signature within days and to take effect in 2018.

"By cutting taxes and reforming the broken system, we are now pouring rocket fuel into the engine of our economy," Trump said Wednesday in a statement after the final congressional passage of the tax legislation.

The final tax bill, the sweeping rewrite of U.S. tax law since 1986, would cut the corporate income tax rate to 21 percent from the current 35 percent and create a 20-percent deduction for income of pass-through businesses such as limited liability companies.

Overhauling the tax code is a top priority for the Trump administration and congressional Republicans before next year's midterm elections. They insist that the broad tax cuts for corporations, small businesses and individuals will boost U.S. economic and job growth.

But Democrats have criticized that the Republican tax legislation would mostly benefit the wealthy and large corporations and increase U.S. budget deficit.

While the bill would reduce taxes on average for all income groups, the top one percent of households would receive the largest benefits, according to a new study by the nonpartisan Tax Policy Center published on Monday.

The study also found that the top one percent taxpayers would receive an average tax cut of 0.9 percent of after-tax income in 2027, while low- and middle-income taxpayers would see little change.

Economists have argued that the massive tax cuts to the wealthy would do little to boost economic growth but further widen U.S. income inequality.

"U.S. policymakers should be particularly concerned about the effects of any new tax legislation on the incomes of individuals and businesses because of rising income inequality in the United States and the relatively limited U.S. social safety net financed with government taxes," Jacob Funk Kirkegaard, a senior fellow at the Peterson Institute for International Economics, wrote in a recent analysis.

While the Trump administration argued that the tax cuts would pay for themselves with faster economic growth, other analyses from independent think tanks and economists have found that the growth effects from tax cuts would be relatively small and U.S. budget deficit would inevitably increase.

The Committee for a Responsible Federal Budget (CRFB) said in a recent analysis that the tax legislation could cost about two trillion to 2.2 trillion U.S. dollars in the next decade, pushing up U.S. public debt to between 98 percent and 100 percent of gross domestic product (GDP) by 2027, compared with 91 percent under current law.

The Republican tax bill has grown more unpopular in the past two months and few people believe it will provide relief for middle-class families, according to an NBC News/Wall Street Journal poll released Tuesday.

Overall, 41 percent of Americans in the poll said the tax plan was a bad idea, up from 35 percent in October, while less than one-quarter of people said the bill was a good idea.

The poll, conducted Dec. 13-15, also found that more than two-thirds of respondents said the tax bill was designed mostly to help corporations and the wealthy.