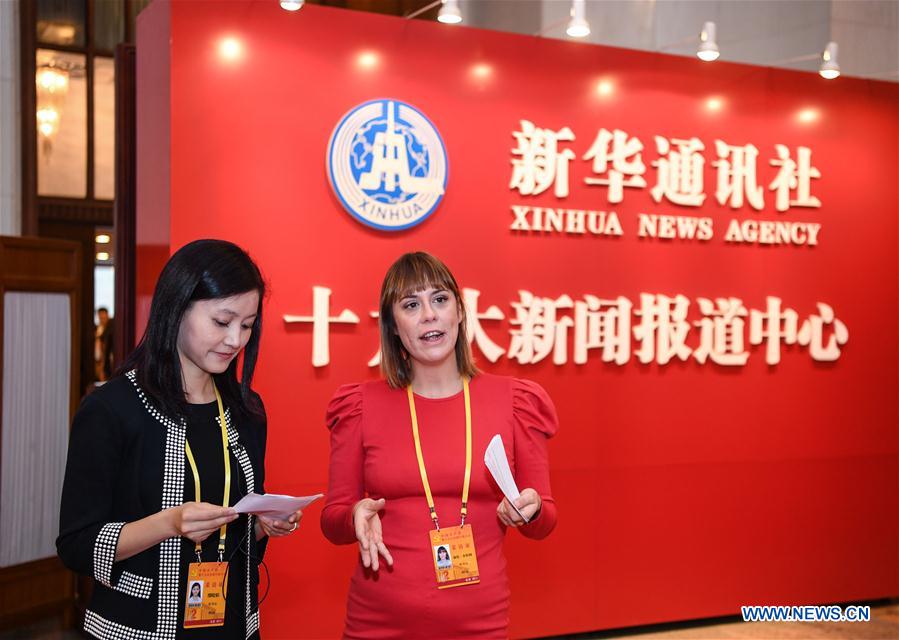 Helen Bentley (R), a foreign journalist with Xinhua News Agency, and her colleague Miao Xiaojuan carry out a live broadcast on Xinhua's official social media accounts at the Great Hall of the People in Beijing, capital of China, Oct. 18, 2017. Of a number of foreign journalists reporting the 19th National Congress of the Communist Party of China (CPC), Helen Bentley and Maria Bulynina, both with Xinhua News Agency, are among them. Xinhua News Agency, China's state news agency, for the first time in history sends foreign journalists to report Party congress with a hope of better reporting about China with foreigners' native languages and their unique perspectives. Helen Bentley, from the Welsh countryside of the UK, has been working with Xinhua since she came to China three years ago. Experienced in live broadcast and making short videos, Helen is mainly engaged in procedural and interpretative reporting during the congress. "It is truely a fantastic experience for me to witness and record China's move into its new era and let me have a visual understanding of the Communist Party of China," said Helen. Maria Bulynina, from St. Petersburg of Russia, has been living in China for four years and started working with Xinhua since this March. From the opening of the congress, she has contributed a number of news reports through attending press conferences of various kinds and group interviewing CPC members. Maria, the first time to report such an important political event, said she was delighted to have a chance to report the 19th CPC National Congress. (Xinhua/Shen Hong)