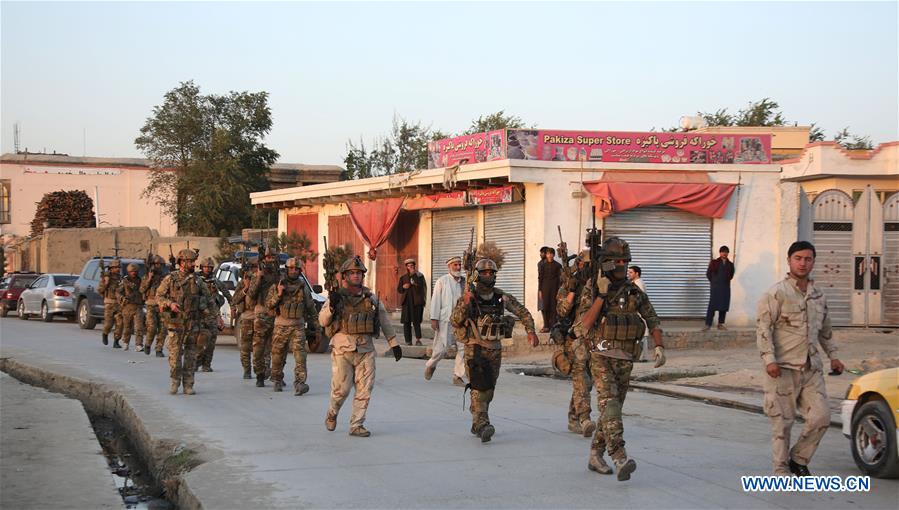 Afghan security force members patrol at the site of an attack in Kabul, capital of Afghanistan, Sept. 27, 2017. Three Taliban and one civilian were killed and 11 people wounded after Taliban attacked an international airport in Kabul on Wednesday, authorities said. (Xinhua/Rahmat Alizadah)

KABUL, Sept. 27 (Xinhua) -- Three Taliban and one civilian were killed and 11 people wounded after Taliban attacked an international airport in Kabul on Wednesday, authorities said.

Taliban fighters seized a house in eastern side of the city and fired rounds of rockets on Hamid Karzai International Airport at around midday, causing a suspension to the flights.

Military helicopters were hovering over the airport and attack site and the sirens were heard throughout the day.

The fighting ended at the evening, when military helicopters struck the seized building after residents were evacuated from the site, killing three terrorists, the Interior Ministry twitted.

The ministry said that two rockets hit two houses in Police District 9, killing one civilian and injuring 11 other civilians.

Some Kabul residents widely believe that militants' sympathizers and facilitators are supporting Taliban in conducting terrorist attacks in Kabul and other big cities. They blamed government for failing to find and capture the facilitators and financiers.