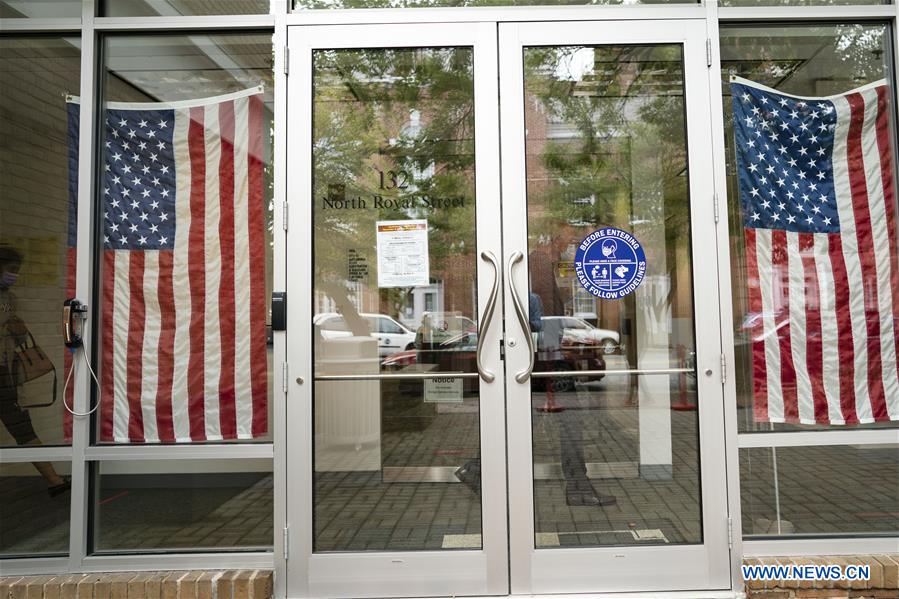 Photo taken on Sept. 18, 2020 shows the entrance to a voting location of in-person early voting for U.S. president in Alexandria, Virginia, the United States. In-person early voting for the U.S. president kicked off Friday in the U.S. state of Virginia and will run through Oct. 31. Residents have the option of either voting in-person or by mail before Election Day on Nov. 3. (Xinhua/Liu Jie)

WASHINGTON, Sept. 18 (Xinhua) -- In-person early voting for the U.S. president kicked off Friday in the U.S. state of Virginia and will run through Oct. 31.

Residents have the option of either voting in-person or by mail before Election Day on Nov. 3.

For those who are not willing or unable to cast in-person ballots, absentee ballots will be sent to them upon request. Voters who opt for voting by mail will have to request a mail-in ballot by Oct. 23.

Hours and numbers of locations for in-person early voting vary by places, with areas including Alexandria planning to expand voting locations and hours so as to avoid large gatherings of voters that add to the possibility of transmitting the coronavirus.

"Plan out your vote. Plan out when you want to come, when you think it's going to be a low turnout," Alexandria City Councilman John Chapman was quoted as saying by NBC4, an NBC affiliate that provides news service in Washington, D.C., Virginia and Maryland. "The reason we're expanding voting times and opportunities is to make sure people aren't waiting in line."

Virginia Governor Ralph Northam tried on Tuesday to reassure residents that mail-in voting is safe, stressing a range of measures the state has taken to prioritize "free and fair elections." Those steps included using drop boxes for early voting and putting barcodes on absentee ballot envelopes to track when they are delivered.

Northam said so far 790,000 people have requested absentee ballots. He said that in the 2016 presidential election, there were a total of 566,000 votes cast absentee.

U.S. President Donald Trump has long been attacking mail-in voting, a method he claimed, without evidence, will lead to voting fraud. The president, however, encouraged voters to cast absentee ballots, tweeting Thursday, "Want to register to vote? Request an Absentee Ballot or vote early."

A U.S. federal judge on Thursday issued a decision to block until Election Day the adoption of wide-ranging operational overhauls to the U.S. Postal Service led by U.S. Postmaster General Louis DeJoy, measures Democrats and other critics said would cause a delay in mail delivery, consequently sabotaging the election results.

In his court opinion, Judge Stanley Bastian of the U.S. District Court for the Eastern District of Washington mandated that all election mail, regardless of postage, must be treated as first-class mail.