In his remarks, President Xi made four suggestions for AIIB to grow into a new platform that promotes development for all its members and facilitates the building of a community with a shared future for mankind:

--Let us aim at development for all and make the AIIB a new type of multilateral development bank that promotes development across the world.

--Let us keep breaking new ground and make the AIIB a new type of development platform progressing with the times.

--Let us strive for excellence and make the AIIB a new type of high-performance institution for international cooperation.

--Let us stay open and inclusive and make the AIIB a new paradigm of multilateral cooperation.

BEIJING, July 28 (Xinhua) -- Chinese President Xi Jinping on Tuesday called for making the Asian Infrastructure Investment Bank (AIIB) a new platform that promotes development for all its members and facilitates the building of a community with a shared future for mankind.

Xi made the remarks when addressing via video link the opening ceremony of the fifth annual meeting of the multilateral development bank.

"The initiative is designed to develop infrastructure and connectivity in Asia and deepen regional cooperation for shared development," Xi said.

From the 57 founding members to today's membership of 102 spanning the six continents of Asia, Europe, Africa, North America, South America and Oceania, the AIIB has grown from strength to strength and provided nearly 20 billion U.S. dollars in infrastructure investment to its members. 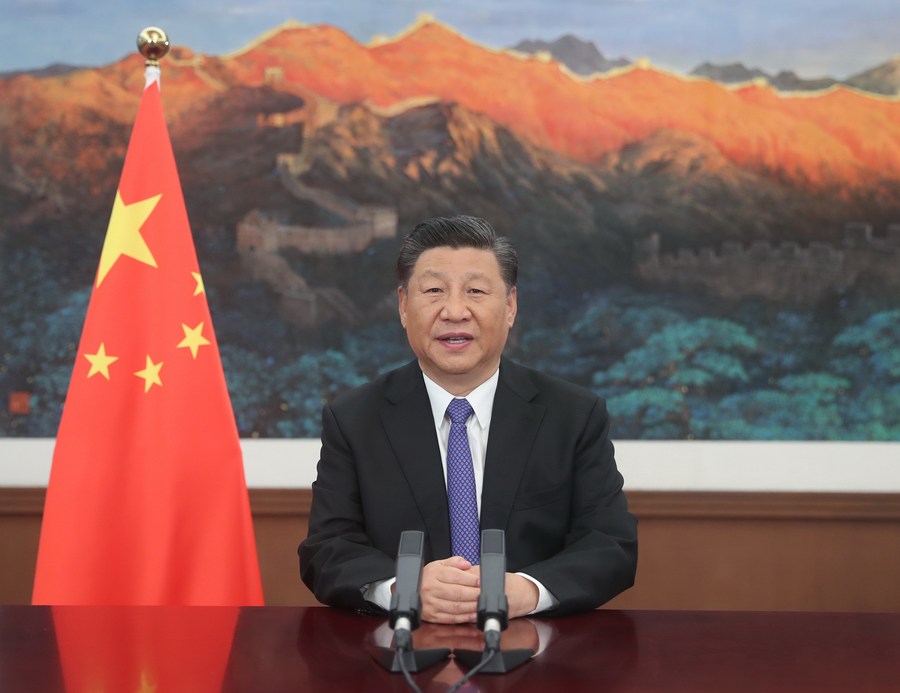 "With more good friends and partners getting on board for higher-quality cooperation, the AIIB has established itself in the world as a new type of professional, efficient and clean multilateral development bank," said Xi.

Stressing that the global response to COVID-19 has made it clear that mankind rise and fall together in a community with a shared future, Xi said that "mutual support and cooperation in solidarity are the only way for mankind to overcome crises."

The AIIB should commit itself to serving the development needs of all its members and providing more high-quality, low-cost and sustainable investment for both traditional and new types of infrastructure, said Xi.

"This will give renewed impetus to economic and social development in Asia and beyond," he said.

Moreover, Xi called for ensuring high standard and high quality in the development of the AIIB in order to make the bank a new type of high-performance institution for international cooperation.

He also suggested the AIIB stay open and inclusive to become a new paradigm of multilateral cooperation. 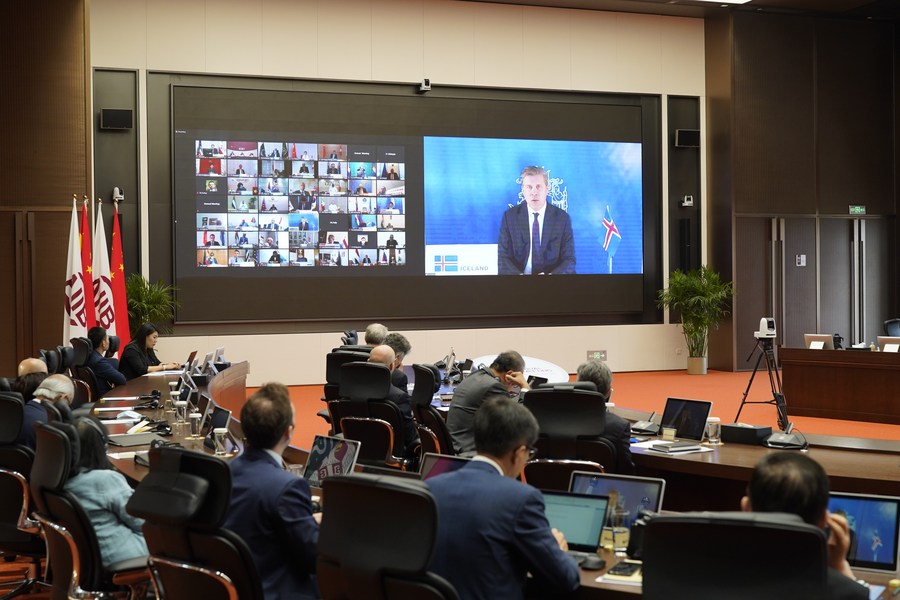 The fifth annual meeting of the AIIB is held via video link on July 28, 2020. (Xinhua/Liu Bin)

Liu Kun, Chinese finance minister, said Xi pinned high hopes on the AIIB and made concrete suggestions for its development.

"These suggestions show the concept and responsibility of China as the biggest shareholder of the AIIB and give the direction for the bank's future development," Liu told reporters after the meeting.

China is AIIB's biggest shareholder, holding a stake of around 30 percent.

"China will work with other members to promote the AIIB to become a high-performance multilateral development bank of the 21st century and make greater contribution to global economic governance," said Liu.

Xu Xiujun, a research fellow at the Chinese Academy of Social Sciences (CASS), said it is of great importance to hold the AIIB annual meeting at the current stage as it will help pool international efforts to fight against the COVID-19 epidemic, promote common development in the region and provide new driving forces for the world economy.

China always supports and adheres to multilateralism, and pursues development with the rest of the world in the spirit of openness and mutually-beneficial cooperation, said Xi in his address.

"China will continue working with other members to support the AIIB and make it a success, and contribute more to the global response to risks and challenges and the pursuit of shared development," he said.

In his address, Xi spoke highly of the prompt response of the AIIB to set up a COVID-19 Crisis Recovery Facility to support its members in containing the virus and reviving their economies in the face of COVID-19.

"This is a typical example of the AIIB's power of action," said the president.

Xu at the CASS said that as an efficient multilateral development bank, the AIIB has provided swift and strong assistance to its members to address the pandemic and economic recovery.

"It has set a good example for multilateral mechanism and increased the confidence of the international community in multilateralism," he said.

According to Finance Minister Liu Kun, AIIB's 103rd member was accepted during the annual meeting.

"Facts prove that it is not only China's choice but also the consensus of the international community to advocate and practice multilateralism," Liu told reporters after the meeting.■