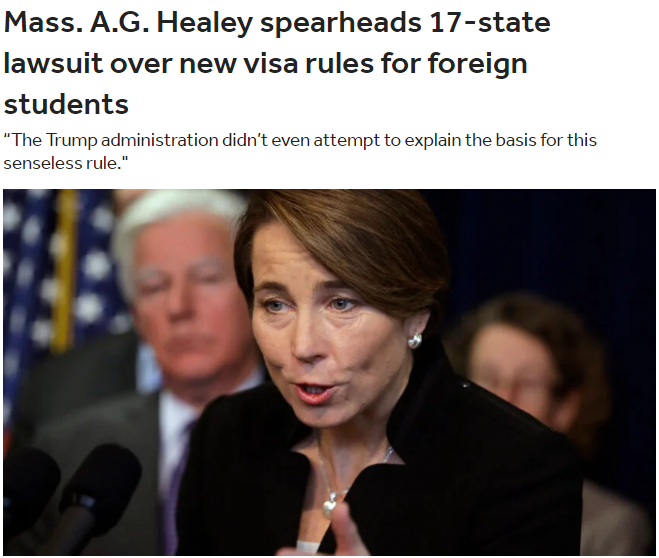 A screenshot taken from boston.com on July 13, 2020 shows the title and picture of its report about 17 U.S. states and the District of Columbia's suing of the administration of President Donald Trump to reject the federal government's recent rule stripping foreign students of their visas if the institution they are enrolled in only offers online teaching this fall due to the coronavirus pandemic. (Xinhua)

"The Trump Administration didn't even attempt to explain the basis for this senseless rule, which forces schools to choose between keeping their international students enrolled and protecting the health and safety of their campuses," says Massachusetts Attorney General Maura Healey in a statement.

WASHINGTON, July 13 (Xinhua) -- Seventeen U.S. states and the District of Columbia sued the administration of President Donald Trump on Monday to reject the federal government's recent rule stripping foreign students of their visas if the institution they are enrolled in only offers online teaching this fall due to the coronavirus pandemic.

Led by the Massachusetts attorney general's office, the lawsuit came exactly one week after the U.S. Department of Homeland Security and Immigration and Customs Enforcement (ICE) released guidelines vowing to invalidate foreign students' F-1 and M-1 visas if the educational institution they are enrolled in switches to online-only courses, possibly depriving them of their legal status of stay in the United States.

"The Trump Administration didn't even attempt to explain the basis for this senseless rule, which forces schools to choose between keeping their international students enrolled and protecting the health and safety of their campuses," Massachusetts Attorney General Maura Healey said in a statement.

The lawsuit, filed in the U.S. District Court in Boston, sought an injunction to stop the entire rule from going into effect, accusing the federal government of engaging in a "cruel, abrupt, and unlawful action to expel international students amidst the pandemic that has wrought death and disruption across the United States."

A screenshot taken from mass.gov on July 13, 2020 shows the name, title and picture of Massachusetts Attorney General Maura Healey. (Xinhua)

The lawsuit alleged that the administration's "actions are arbitrary, capricious, and an abuse of discretion because they reverse previous guidance without explanation, input, or rationale," adding that the new guidelines violated "the Administrative Procedure Act - and fail to consider the need to protect public health and safety amidst the ongoing COVID-19 pandemic."

"The lawsuit includes a request for immediate preliminary relief blocking the rule from going into effect while the case is litigated, and the attorneys general have requested a hearing as soon as possible," the Massachusetts attorney general's office said in a press release.

Announced on July 6, the ICE's controversial order said that international students who are only offered online courses in the upcoming semester "must depart the country or take other measures, such as transferring to a school with in-person instruction to remain in lawful status."

Those who violate the rules "may face immigration consequences including, but not limited to, the initiation of removal proceedings," the ICE said.

While the U.S. government typically requires international students to take most classes in person, the ICE offered flexibility in March, allowing the students to take online courses throughout the duration of the coronavirus pandemic. 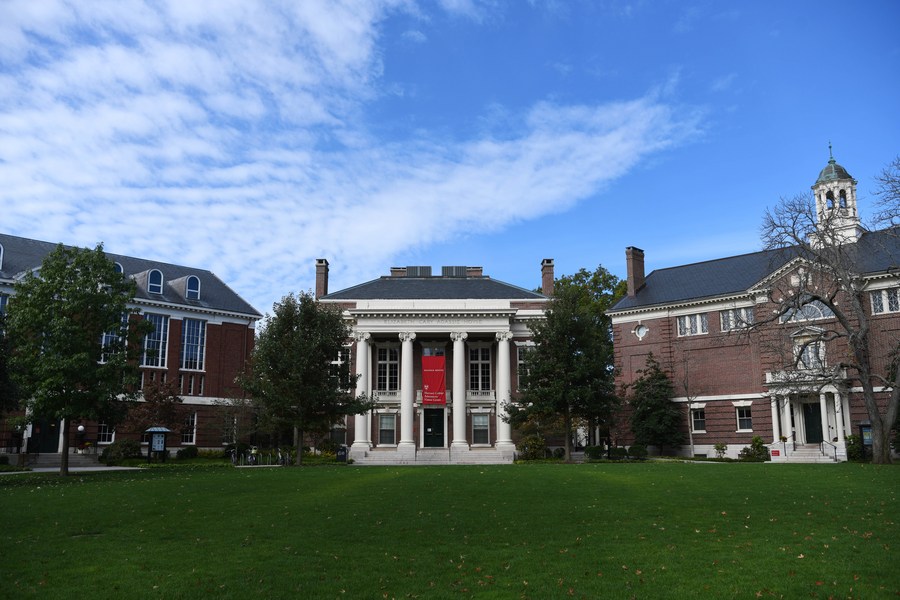 File photo taken on Oct. 14, 2018 shows the campus of the Harvard University in Cambridge of Massachusetts, the United States. (Xinhua/Liu Jie)

Harvard University and the Massachusetts Institute of Technology filed a lawsuit, also in the U.S. District Court in Boston, on Wednesday seeking a temporary restraining order and preliminary and permanent injunctive relief to bar the federal government from enforcing its new order.

"(The) ICE's action proceeded without any indication of having considered the health of students, faculty, university staff, or communities ... or the absence of other options for universities to provide their curricula to many of their international students," the lawsuit by the two prestigious universities read.

The U.S. District Court in Boston will hold a hearing on the Harvard and MIT case Tuesday.

In a show of solidarity, 59 colleges, based in 24 states and Washington, D.C., filed an amicus brief in court on Sunday backing Harvard and MIT's legal action. The schools include Georgetown, Princeton, Stanford and Yale, among others.

"A fundamental principle of administrative law is that the government must provide a reasoned explanation for its actions and consider all important aspects of a problem before imposing burdens on regulated parties," the brief stated. "The July 6 Directive fails this basic requirement."

"The emergency persists," the universities said, referring to the coronavirus pandemic, "yet the government's policy has suddenly and drastically changed, throwing (schools') preparations into disarray and causing significant harm and turmoil." ■