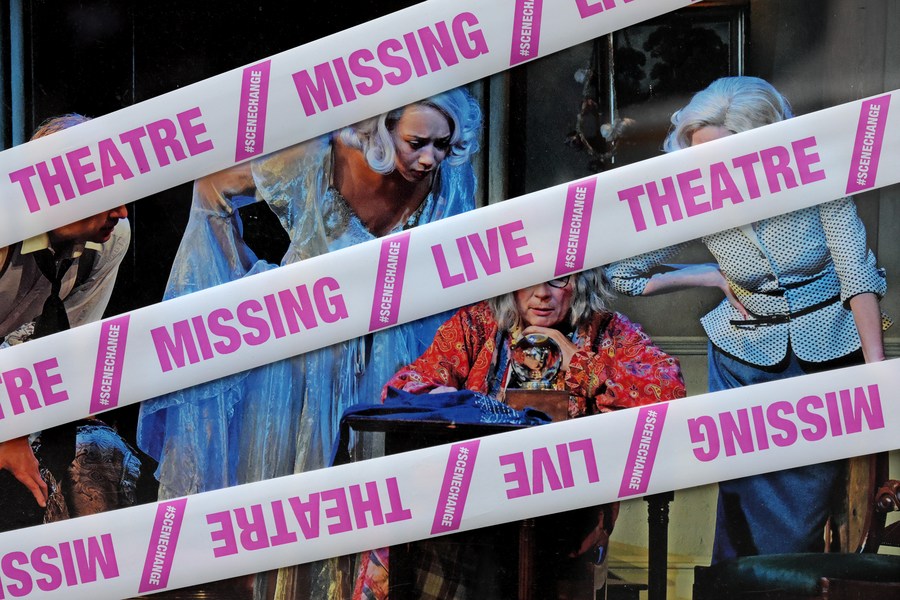 Photo taken on July 7, 2020 shows a poster outside the Duke of York's Theater wrapped with pink tapes in London, Britain. (Photo by Tim Ireland/Xinhua)

Even though the British government announced an emergency support package to help protect the future of theaters, a number of venues like NST have still had to close.

Due to social distancing measures and uncertainty, many theater companies say they cannot see themselves reopen before 2021.

LONDON, July 11 (Xinhua) -- Nuffield Southampton Theatres (NST), an institution that comprises two venues in Southampton, is set to permanently close. The theater, which has run for over 50 years, announced that it went into administration in May after it suffered a severe drop in ticket sales amid the coronavirus pandemic.

Even though the British government announced an emergency support package to help protect the future of theaters, a number of venues like NST have still had to close.

Philippa Childs, head of Bectu, the union for creative ambition representing over 40,000 staff in the media and entertainment industries, said the horizon is not looking good. Due to social distancing measures and uncertainty, many theater companies say they cannot see themselves reopen before 2021. 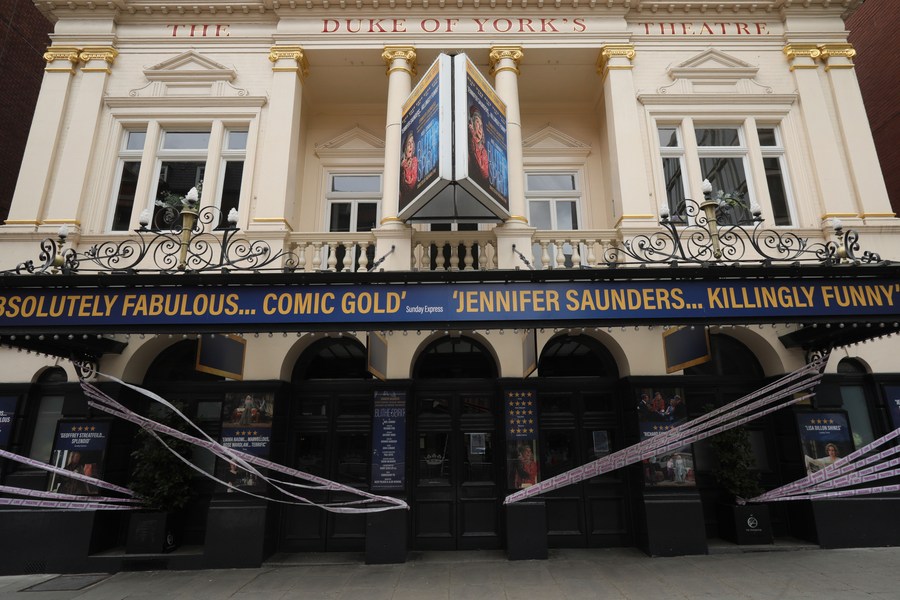 Photo taken on July 7, 2020 shows the Duke of York's Theater wrapped with tapes in London, Britain. (Photo by Tim Ireland/Xinhua)

"The theater industry is in a pretty parlous state; theaters were told to close down back in March. Since that time, they've been dark pretty much," Childs told Xinhua in an exclusive interview.

"Some theaters have already started to cancel pantomimes, which is a money spinner for theaters -- they rely on the money from pantomimes in order to survive throughout the year," said Childs.

"Generally, theaters don't have huge reserves, so this period of having absolutely no income has been quite devastating for them. We've seen some go into liquidation and we've seen a lot in the last couple of weeks starting to talk about redundancies," she said.

Part of the industry's frustration is that the government has not issued a roadmap out of the crisis with clear dates for theaters to work towards.

The concern is not just on the finances of the industry, but also on how it can continue in a post-lockdown world with social-distancing measures.

"If you know lots of British theaters, the buildings are old, the entrances are very narrow, the toilets are very small, the seats very squashed together. So the idea of even one-meter-plus, and people being able to go back to the theater at one-meter-plus is not financially viable and actually, I wonder, how enthusiastic people would be under those circumstances anyway. It's a pretty bleak picture for UK theater at the moment," said Childs. 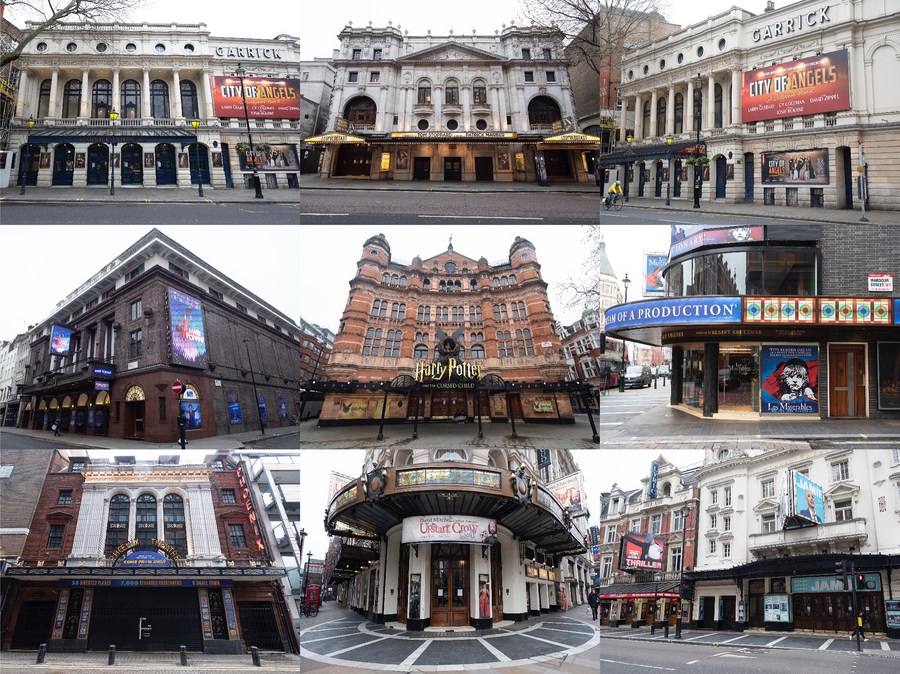 This combination photo taken on March 19, 2020 shows the closed theaters at the West End in central London, Britain. (Photo by Ray Tang/Xinhua)

On July 4, the government announced that theaters could reopen, but could not stage live performances. As the key selling point of any theater is that of its live performances, many within the industry were left scratching their heads on how to continue to operate under the guidance.

A number of major British theaters quickly looked to use technology in order to keep their services open.

"Theaters are all about live performances, so those that have the facilities and the abilities to do so are putting on some performances that can be streamed," Childs said.

The Royal Opera House and the National Theatre were quick to offer such services, but smaller theaters were not and are still not in a position to do that.

"I think the frustration is that people want to have a date to work towards, they want to have some protocols that they can work around. So they can look at their buildings and think about, when the time comes, they can get back into the building and put on a show and that they've got everything in place to be able to do that," she said.

Many are concerned that a continuation of restrictions could mean that the industry is set to lose more revenue. 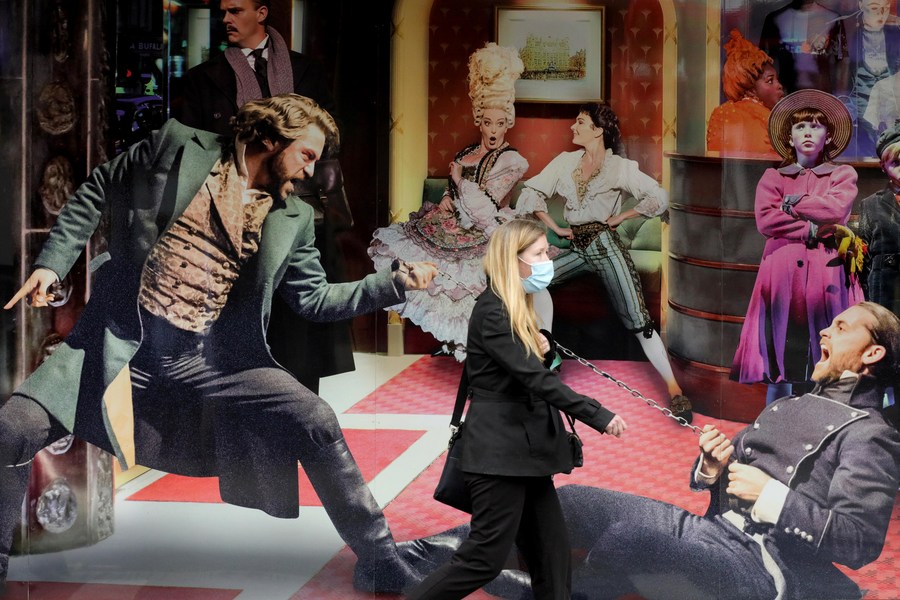 A woman wearing a face mask walks past a poster of Les Miserables at the Sondheim Theater in London, Britain, July 7, 2020. (Photo by Tim Ireland/Xinhua)

This was well received by many in the theater industry, who saw it as a lifeline to keep the arts sector afloat.

Childs was quick to release a statement on the emergency package, praising the government for offering their support to the sector but warning that it was too late for some small theaters and rapid action was needed to "stem the tide of redundancies and closures that are emerging in the sector."

"We will now be scrutinizing the details of this package to make sure it lives up to the real needs of our sector," she said.

"The terms of these grants and loans must recognize that there is still a long journey to recovery for theaters and live events and this package is the first cautious step towards reviving the sector," she added.■