Chinese bronze artwork exhibition to be held in Houston 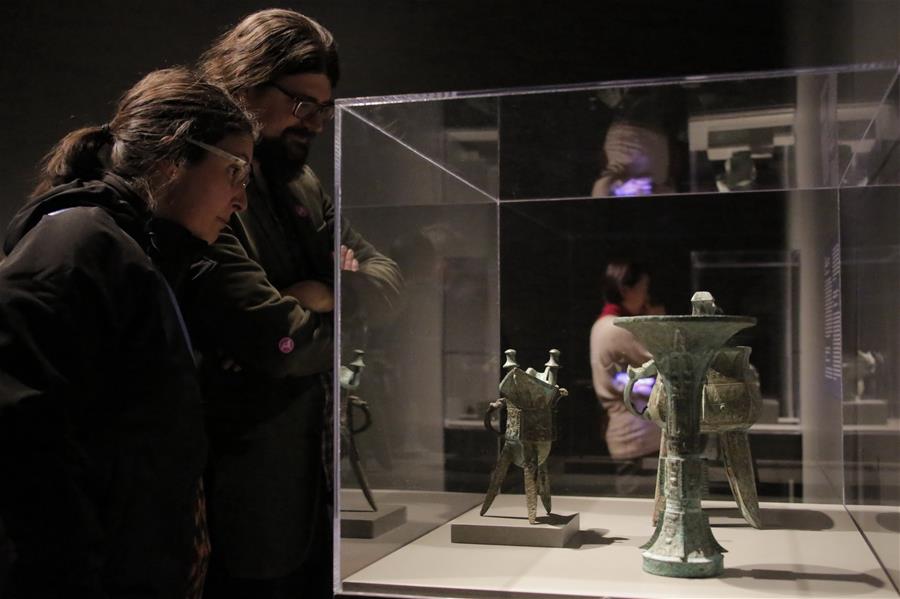 People view Chinese ritual bronzes during a media preview of the exhibition Eternal Offering: Chinese Ritual Bronzes in Houston, Texas, the United States, on Feb. 26, 2020. An exhibition of ancient Chinese bronze artworks will be on display from Feb. 29 to Aug. 9 at Asia Society Texas Center (ASTC) in Houston, ASTC announced on Wednesday night. (Photo by Lao Chengyue/Xinhua)

HOUSTON, Feb. 27 (Xinhua) -- An exhibition of ancient Chinese bronze artwork will be on display on Feb. 29 through Aug. 9 at Asia Society Texas Center (ASTC) in Houston, Texas, the United States, ASTC announced on Wednesday night.

The exhibition will feature almost 100 pieces spanning over three millennia of ancient Chinese bronze artwork and later eras inspired by the Bronze Age, according to ASTC.

Named Eternal Offering: Chinese Ritual Bronzes, the exhibition will showcases the artistry of hundreds of artisans and craftsmen whose creation were represented in ancient ancestral traditions and burial rites.

A reception was held Wednesday night to celebrate the upcoming exhibition. ASTC curator Bridget Bray told Xinhua at the reception this exhibition will be the first of its kind in Houston.

"This is our premiere exhibition of Chinese bronze material here in Houston at Asia Society Texas. And so we're thrilled to be able to share this material of such a high quality with our visitors here in the city and the region," she said.

Chinese Consul General in Houston Cai Wei said for more than 3,000 years, the ritual culture has been an important pillar to the Chinese civilization.

"I hope there will be more such event in the future to strengthen the mutual understanding between our two countries," he said.

Founded in 1956, Asia Society is a nonpartisan, nonprofit institution with major centers and public buildings in New York, Hong Kong, and Houston, and offices in other nine cities worldwide. It is an educational organization dedicated to promoting mutual understanding and strengthening partnerships among peoples, leaders, and institutions of Asia and the United States in a global context.