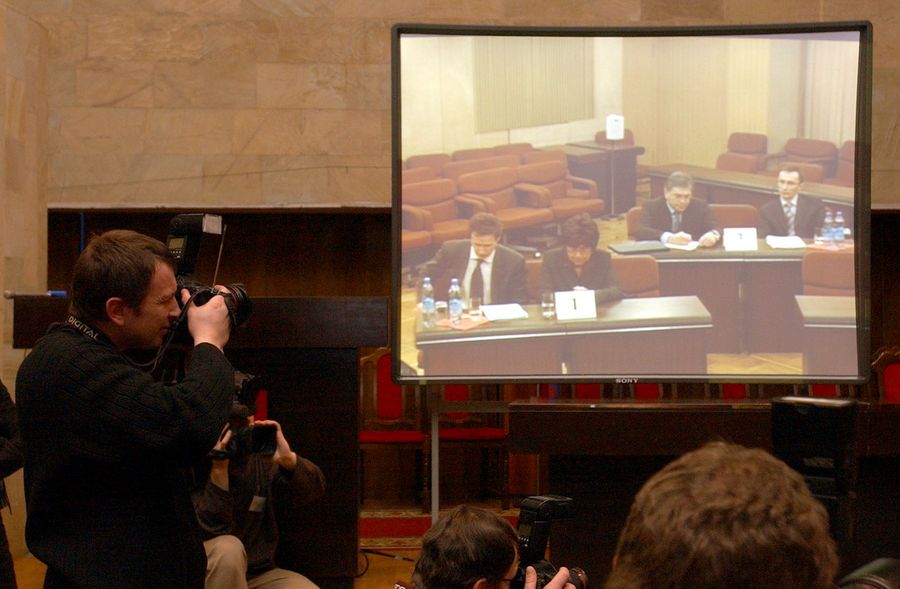 A photojournalist captures a frame from the live-broadcast video of a public auction of Yukos' core production subsidiary Yuganskneftegaz held in Moscow, capital of Russia, on Dec. 19, 2004. (Xinhua/Zhang Weige)

Russia will now appeal the ruling at the Supreme Court in the Netherlands.

The Ministry of Justice said in a statement that The Hague Court of Appeal failed to take into account the unlawful use by former Yukos shareholders of a treaty not ratified by Russia.

The court also ignored the fact that former Yukos shareholders obtained control over the company that was privatized in the 1990s through illegal actions, including conspiracy and bribery, it said.

In the management of Yukos, the former majority holders allowed massive tax evasion, illegal withdrawal of assets abroad, money laundering and other illegal actions, it added.

Earlier on Tuesday, the appeals court overruled a decision by the District Court of The Hague in 2016, which overturned a 2014 compensation order by the Permanent Court of Arbitration (PCA) in the Hague over the lack of jurisdiction as the case was based on the 1994 Energy Charter Treaty (ECT), which was signed but not ratified by Russia.

"When the Russian Federation signed the ECT, it undertook to apply that treaty provisionally unless it would violate Russian law. In the opinion of the court, there is no question of conflict with Russian law," The Hague Court of Appeal said in a statement.

Russia will now appeal the ruling at the Supreme Court in the Netherlands.

Yukos was one of the largest oil and gas companies in Russia. Former Yukos CEO Mikhail Khodorkovsky, then the richest man in Russia, had been jailed for more than a decade on charges of fraud and tax evasion, among others.

Khodorkovsky was pardoned by Russian President Vladimir Putin in December 2013.

Yukos was declared bankrupt in 2006 and its assets were tendered and finally incorporated into Russia's major oil and gas company Rosneft. Three major shareholders then initiated arbitration against the Russian Federation. ■