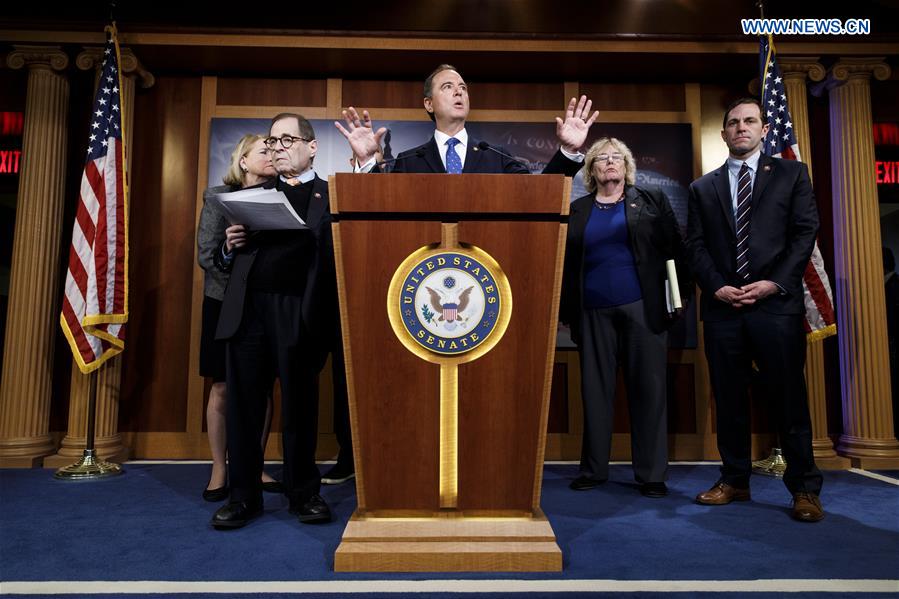 U.S. House Intelligence Committee Chairman Adam Schiff (C) speaks at a press conference during the Senate impeachment trial on Capitol Hill in Washington D.C., the United States, on Jan. 25, 2020. U.S. President Donald Trump's legal team started Saturday to make opening arguments in defense of the president in the ongoing impeachment trial in the Senate, after House managers, a group of seven House Democrats acting as prosecutors, argued for the president's conviction and removal from office over the last three days. (Photo by Ting Shen/Xinhua)

WASHINGTON, Jan. 25 (Xinhua) -- U.S. President Donald Trump's legal team started Saturday to make opening arguments in defense of the president in the ongoing impeachment trial in the Senate, after House managers, a group of seven House Democrats acting as prosecutors, argued for the president's conviction and removal from office over the last three days.

"You've heard the House managers speak for nearly 24 hours over three days," White House Counsel Pat Cipollone said. "We don't anticipate using that much time. We don't believe that they have come anywhere close to meeting their burden for what they're asking you to do."

Cipollone declared that Trump "did absolutely nothing wrong" with regard to his dealings with Ukraine, a chain of controversial events which House Democrats investigated into during the impeachment inquiry, and which led to the president being impeached for what the Democrats said were his abuse of power and obstruction of Congress.

Contrary to the House managers' argument that Trump solicited Ukraine's interference with the 2020 U.S. presidential election to benefit himself, Cipollone argued that Democrats' effort was to "overturn the results" of the 2016 election and "remove President Trump in the ballot in an election that's occurring in approximately nine months."

"They're asking you to tear up all of the ballots across this country on your own initiative," the lawyer said. "Take that decision away from the American people."

Cipollone claimed that the aim of the administration withholding some 400 million U.S. dollars in military aid to Ukraine was to get European countries to contribute more to Kiev's national defense, reiterating similar assertions Trump made multiple times when asked about the issue.

Deputy White House Counsel Michael Purpura, who delivered his presentation after Cipollone, insisted that Trump's July 25 phone call with Ukrainian President Volodymyr Zelensky was about "burden-sharing" between the United States and Europe in helping the former Soviet republic defend itself against foreign aggression.

Purpura claimed that Ukraine didn't know about the freeze of the aid until late August, after the July phone call. To prove his claim, Purpura cited the ambiguity in several witnesses' testimonies during the House impeachment inquiry.

Justifying the suspension of the aid, Jay Sekulow, Tump's personal lawyer, said several witnesses acknowledged that foreign aid is held up all the time for a variety of reasons.

He went on to argue that the Trump administration is more committed than previous administrations to helping Ukraine, one example being the funding of Javelin missiles.

On Trump asking Zelensky to investigate a conspiracy theory that Ukraine meddled in the 2016 U.S. election, Purpura said, "There is absolutely nothing wrong with asking a foreign leader to help get to the bottom of all forms of foreign interference in an American presidential election."

The legal team's arguments lasted about two hours Saturday, much shorter than what the House managers spent daily when they made theirs.

Like the House managers, Trump's attorneys are allotted the same 24 hours within three days to present their case, yet Cipollone told senators that the eight-member team won't use that much time.