By the end of 2019, China's high-speed railway network stretched 35,000 km, up more than 5,000 km from one year earlier. Thanks to the expanding railway network, a once slow and crowded journey during the Spring Festival travel rush is becoming an easier and cozier experience.

HEFEI, Jan. 21 (Xinhua) -- The Spring Festival travel rush, or "Chunyun" in Chinese, has been in full swing as families reunite for the traditional holiday in the world's most populated country.

Official data showed that over 3 billion trips are expected to be made during the 40-day travel rush that started on Jan. 10, posing a considerable challenge to the country's transport system.

As more cities are linked with the country's high-speed railway network and more technologies and services are introduced, a once slow and crowded journey is becoming an easier and cozier experience. 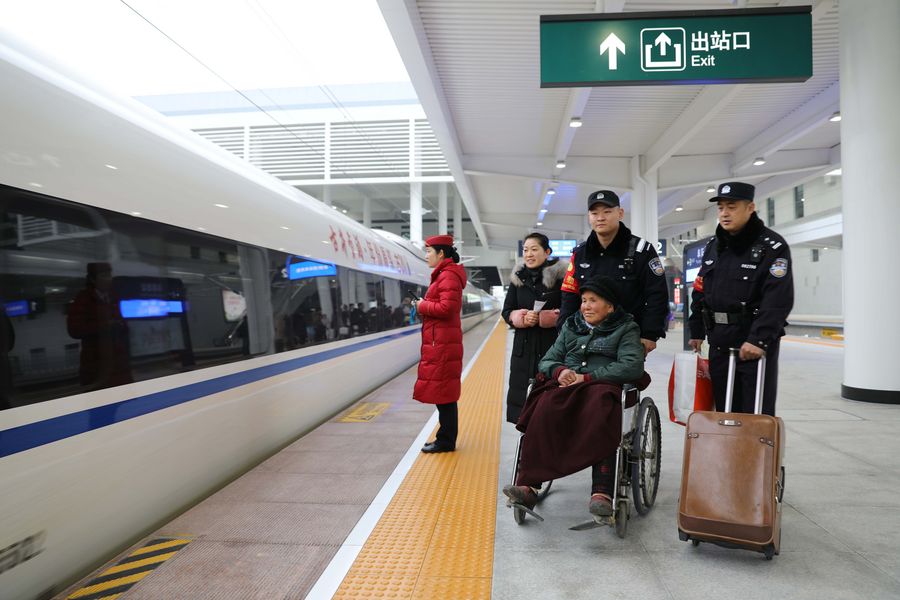 The word "Chunyun" first appeared in China in the 1980s when an increasing number of rural laborers flocked into big cities to find higher-paid jobs. They would return to their hometowns once a year to celebrate the Lunar New Year with their families.

Li Tengfei, a 25-year-old salesman working in the eastern Chinese city of Suzhou, is among the millions of passengers returning home during the holiday.

This year, Li's journey back home took half the time thanks to the operation of a high-speed railway line in his home city of Fuyang in eastern China's Anhui Province.

"There was only one slow train between Suzhou and my hometown that would depart early in the morning. The over 10-hour journey was a nightmare," said Li, who traveled home with his fiancee by bullet train this year.

As a major labor export city, Fuyang has a total population of about 10.7 million, exporting about 3.5 million migrant workers to the Yangtze River Delta, the Pearl River Delta and other developed regions in China.

In December 2019, the city was included in the country's high-speed railway network, witnessing the historic moment of all 16 prefecture-level cities in the province entering the era of high-speed trains.

"The seating capacity is 610, but we have 718 passengers aboard with many holding standing tickets," said Wei Lianyu, the crew chief of train G7732, which makes three round trips per day between Fuyang and Hefei, capital of Anhui.

"Compared with other transportation means, high-speed trains are more comfortable and punctual. It is the preferred choice for many passengers," said Wei. 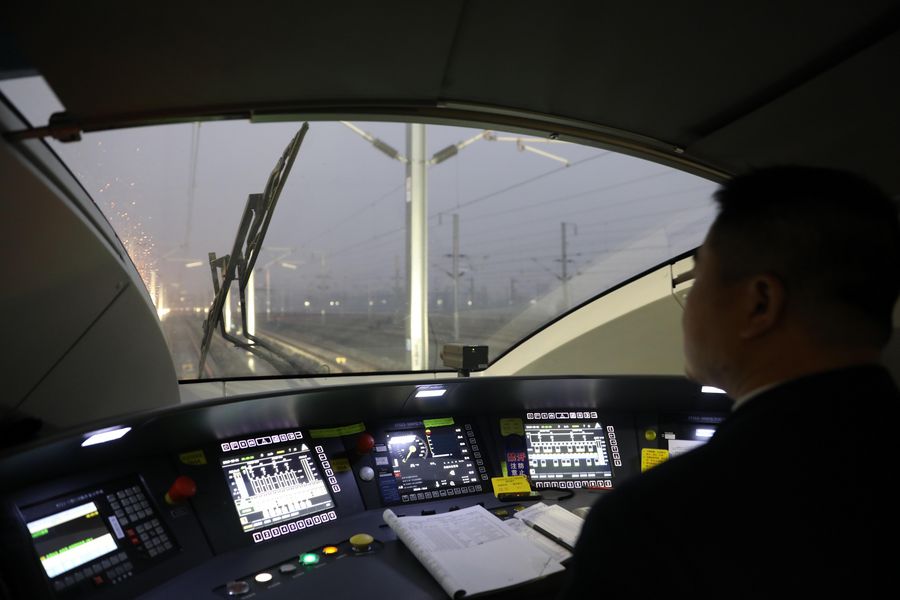 The advent of the high-speed railway also shortens the travel time between Fuyang and Chizhou, a city in southern Anhui, where Chen Han, Li's fiancee, is from.

"We are getting married during the Spring Festival. It will be easier for my family and friends to visit me in Fuyang thanks to the high-speed train. It feels like the distance has been shortened," said Chen.

According to the National Development and Reform Commission, around 440 million trips will be made via railway during the travel rush. In Anhui alone, more than 15 million trips are expected to be made by train during the period, 7 percent higher than last year.

By the end of 2019, China's high-speed railway network stretched 35,000 km, up more than 5,000 km from one year earlier and accounting for nearly 70 percent of the world's total, according to the China State Railway Group Co., Ltd.

China plans to expand its high-speed railway network, already the world's biggest, by adding 2,000 km of new lines in 2020. China's transport authorities have also introduced new technologies and services to ensure a smooth and pleasant travel experience for passengers.

Instead of printing and collecting tickets at train stations, passengers can now pass through ticket checks with just their ID cards and facial recognition, as China has introduced an e-ticket system for high-speed railways.

"The e-ticket system has cut the ticket checking time by over 30 percent, efficiently relieving traffic congestion during the travel rush," said Shan Xinghua, chief researcher at the China Academy of Railway Sciences.

A total of 1,020 train stations in the country had adopted the system by Jan. 10.

Ticket booking is also more customer-friendly thanks to a series of improvements by 12306, the country's official online railway ticket-booking platform, including increasing its ticket capacity, extending daily work hours and introducing a waitlist function to improve booking efficiency.

In addition, to improve people's travel experience, new services such as food ordering and seat selection are now available on the ticket-booking platform.

"The passenger flow at Fuyang West Station can reach 43,000 people per day, and the station is expected to receive about 28,000 passengers at the peak of the Spring Festival travel rush," said Zhang Yuliang, head of the station.

"We are confident in meeting the strong transport needs and serving passengers well," Zhang added.