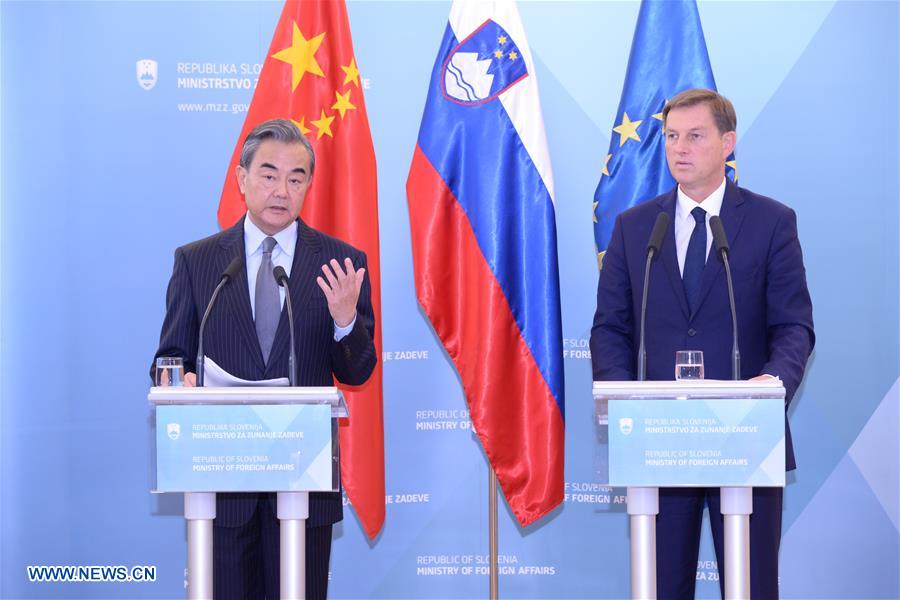 LJUBLJANA, Dec. 14 (Xinhua) -- Chinese State Councilor and Foreign Minister Wang Yi said Saturday that the China-U.S. deal on the text of a phase-one economic and trade agreement serves as bullish news for both countries and the rest of the world.

Speaking at a joint press conference with Slovenian Deputy Prime Minister and Foreign Minister Miro Cerar, Wang said China has, as always, been opposed to settling economic and trade disputes by imposing tariffs as there is no winner in a trade war.

China has also rejected the use of unilateral pressure as it violates the rules of the World Trade Organization (WTO), said Wang.

He pointed out that following rounds of back-and-forth negotiations, China and the United States have agreed on the wording of a phase-one economic and trade agreement, and the U.S. side has promised to phase out additional tariffs on Chinese products.

The agreement demonstrates the spirit of mutual respect and is the outcome of consultation on equal basis, which addresses concerns of both sides, he said.

The agreement meets the intrinsic requirements of high-quality economic development of China and the common aspiration of the international community, and serves the common interests of both peoples, he said.

The agreement is conducive to gradually bringing China-U.S. economic and trade relations back onto the track of normal development, injecting confidence into the downward world economy and enhancing stability of the global trade order, he said.

The current China-U.S. relations still face many issues which call for attention and careful handling, Wang said, voicing hope that the United States will make concerted efforts with China to effectively manage differences and expand mutually beneficial cooperation so as to push forward with the China-U.S. relations featuring coordination, cooperation and stability.

The deal is neither targeting nor harming a third party but bullish news for all countries of the world.

China-U.S. trade cooperation will be based on WTO rules and Chinese enterprises will import more competitive products and services from the United States and other countries according to the marketing and commercial principles, he said.

As China is deepening its reform and opening up, its market will inevitably expand, which offers opportunities to the United States, as well as to Europe and the rest of the world, Wang said.

Voicing China's consistent opposition to protectionism, Wang said that China maintains that an open economy be built up and all countries should provide a fair and non-discriminative environment for normal trade and investment, he said.

China welcomes businesses from all countries to compete fairly in the Chinese market and more competitive products from Europe, he said.