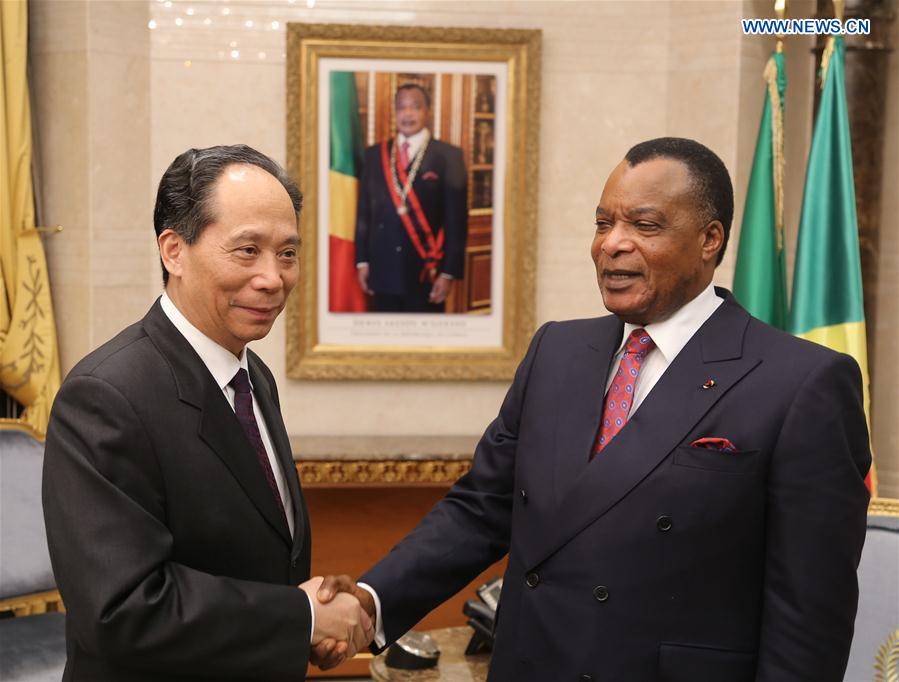 Ji Bingxuan (L), vice chairman of the Standing Committee of China's National People's Congress, meets with Republic of Congo President Denis Sassou Nguesso in Brazzaville, Republic of Congo, Dec. 13, 2019. At the invitation of the National Assembly of the Republic of the Congo, Ji Bingxuan led a delegation to visit the African country on Dec. 11-13. (Xinhua/Wang Songyu)

BRAZZAVILLE, Dec. 13 (Xinhua) -- At the invitation of the National Assembly of the Republic of the Congo, Ji Bingxuan, vice chairman of the Standing Committee of China's National People's Congress, led a delegation to visit the African country on Dec. 11-13.

Ji met with President Denis Sassou Nguesso and Secretary General of the Congolese Labor Party and President of the Senate Pierre NgoloJi Bingxuan, held talks with Isidore Mvouba, speaker of the National Assembly, and attended the ceremony to launch the "Silk Road Family" operation in the Congo.

The Chinese official said that since the establishment of bilateral diplomatic relations 55 years ago, the two countries have respected each other, treated each other on an equal footing and with sincerity, and has always understood and supported each other on issues of each other's core interests and of major concerns.

China is willing to work with the Congo to further implement the outcomes of the Beijing summit of the Forum on China-Africa Cooperation and the important consensus between the two heads of state, and work together to build a closer China-Africa community with a shared future, he said.

The Congolese side spoke highly of bilateral relations, thanked China for its precious long-term support for the economic and social development of the Congo and expressed its willingness to strengthen exchanges and cooperation with China in various fields so as to jointly bring benefits to the two peoples.