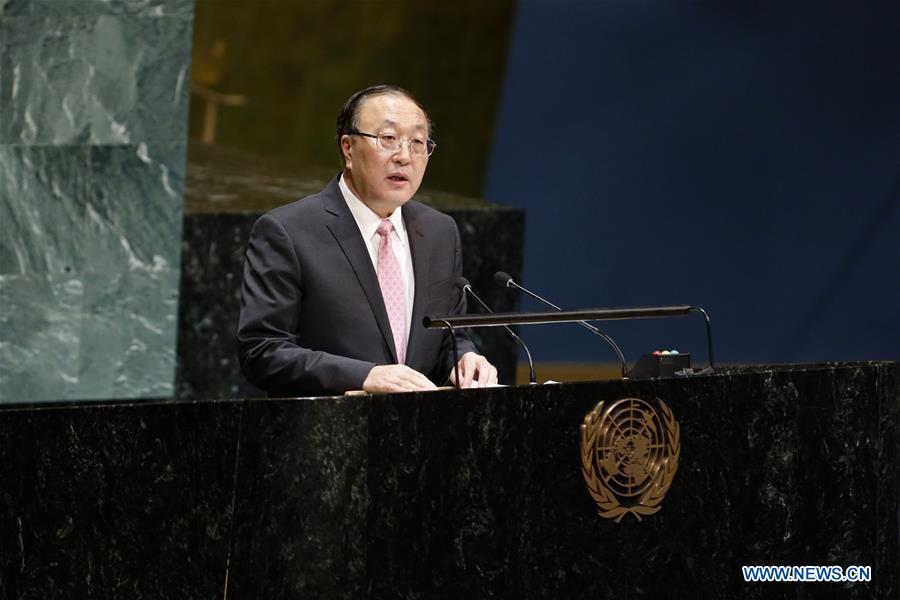 Zhang Jun, China's Permanent Representative to the UN, addresses a UN General Assembly debate on sports for development and peace at the United Nations headquarters in New York, on Dec. 9, 2019. The Chinese UN envoy on Monday said Beijing aims to hold a green Winter Olympics in 2022, in which green power will be used in all venues to strive for carbon neutrality. (Xinhua/Li Muzi)

UNITED NATIONS, Dec. 9 (Xinhua) -- The Chinese UN envoy on Monday said Beijing aims to hold a green Winter Olympics in 2022, in which green power will be used in all venues to strive for carbon neutrality.

Zhang Jun, China's permanent representative to the UN, reaffirmed the promise during a UN General Assembly debate on sports for development and peace.

With the work plan, green power will be used in all winter Olympic venues to strive for carbon neutrality, he expounded.

Zhang said China will continue to promote openness in Olympic Games, and through the Beijing games, "we will strengthen sports cooperation and people-to-people and cultural exchanges between China and the rest of the world."

He pledged China will create a new window for promoting the Olympic spirit and exchanges among civilizations and mutual learnings.

Moreover, China will combat corruption and uphold integrity in hosting the Olympic Games, tighten oversight of the preparations and adopt zero tolerance for doping so that the Beijing Winter Olympic Games will be "as clean and pure as ice and snow," Zhang said.

Monday's meeting focused on sports for development and peace and approved a resolution calling for the Olympic Truce to be implemented for the Tokyo Games in 2020.

In particular, it called for ensuring the safe passage, access and participation of athletes, officials and all other accredited persons taking part in the Games, and contributing to the safe organization of the Games.

Further, the resolution decided that the 76th session of the General Assembly, set to start in September 2021, should discuss similar matters for the Olympic Winter Games and the Paralympic Winter Games to be held in Beijing in 2022.

Zhang said the resolution represents the call of justice by all UN member states.

Wishing the Tokyo 2020 Summer Olympic Games a success, he urged all member states to act in accordance with the requirements of the resolution by striving to bridge differences, resolve disputes, and stop the use of all military force and hostility during the Olympic Games.

He further said the Olympic Games is not only an arena for athletes, but also a bridge of friendship for people of all countries, noting the modern Olympic Games brings together people of different countries, ethnicities and cultural backgrounds, enhances mutual understanding, promotes social cohesion, and greatly contributes to world peace and development.