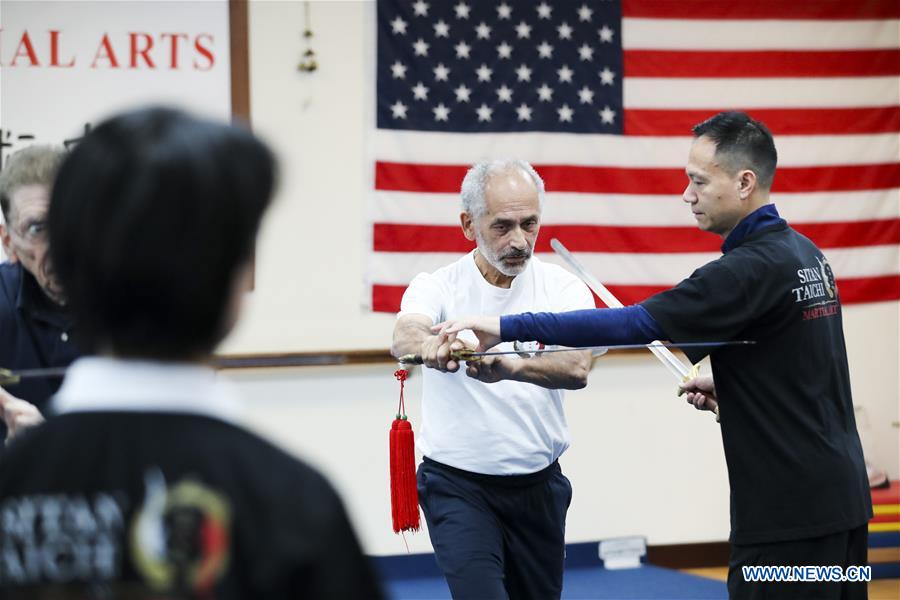 NEW YORK, Dec. 9 (Xinhua) -- The ancient Chinese martial art Tai Chi has increasingly become a form of life for many New Yorkers, thanks to the efforts made by former world martial art champion Chen Sitan and his wife Lin Xu.

From five-year-old kids to the elderly in their 70s, people from various races and cultural backgrounds in New York have been attracted to the martial art through the classes the couple teach, the Tai Chi & Health Qigong festivals they hold, and community events they initiate in libraries and retirement clubs, among others.

FROM COMPETITION TO LIFESTYLE

Chen started learning martial arts at the age of six. By the age of 30 when he retired from his athletic career, he had already won 32 gold medals in Chinese and international competitions.

After having coached athletes in sports team for several years, Chen decided to come to the United States in 2003 in the hope to bring Chinese cultural to more people around the world through Tai Chi.

"Tai Chi is not only about competition; it means much more. It is a way of life," said Chen.

The couple started teaching children Tai Chi and other forms of martial arts in school and later founded Sitan Tai Chi and Martial Arts with the mission of promoting Tai Chi and providing a forum for those interested in the martial art.

Originated from China, Tai Chi's slow, graceful movements are accompanied by deep circular breathing. The movements work with what is called "qi" or life force, a type of "flow" that everyone has, said Lin.

There is growing evidence that this mind-body practice, which originated in China as a martial art, has value in treating or preventing many health problems.

This gentle form of exercise can help maintain strength, flexibility and balance, and could be the perfect activity for the rest of your life, said a research by Harvard Medical School.

"Parents send young kids to my class to improve fitness and learn Chinese culture, adults take classes to relief stress from work, and retired people practice it to prevent health problems," she said.

"As an engineer and then a sales manager, I was on phone a lot and thus had poor posture. I needed to get back into some healthy type of lifestyle after I retired, and I found Tai Chi," said Frank Mandarino, who has practiced Tai Chi for 11 years at Sitan Tai Chi and Martial Arts.

He added that Tai Chi is difficult because people who practice it should coordinate their muscles when making movements, and he enjoyed such challenge.

"As you do it more and more, it becomes relaxing, and almost meditating," said Mandarino, who is 81 years old.

Chen and Lin do not settle for merely teaching martial arts. They aim at promoting Chinese cultural through martial arts.

"Language is one of biggest barriers when promoting Chinese culture to foreigners, but Tai Chi as a form of body movement does not have such a barrier," said Lin.

She added that Tai Chi performances in community centers are always well-received as local residents could see for themselves what Tai Chi is all about.

"As time goes by, people realize the core value of Tai Chi, which is balance," said Chen.

"We internalize the philosophy through practicing Tai Chi every day," said Chen.

Jean Kestel has been coming to group Tai Chi class at the club house at The Seasons in East Meadow, New York, for about four years. In addition to preventing health problems by practicing Tai Chi, she also enjoyed doing exercise in a group.

"I have pictures of people practicing Tai Chi in parks and malls in China when I was there in 2003, we don't have that in the United States," she said, adding that the classes in the club house offered her a chance to stay in touch with Chinese culture. She planned to go back to China next year.

STILL A LONG WAY TO GO

Although Tai Chi is already getting popular in fast-paced New York City and neighboring areas, Chen is not content with the current situation.

He is developing a training program and grading system through which his school could train more qualified teachers.

"A standard, effective, applicable, and practical training and grading system could gather all the teachers who are out there promoting Tai Chi on their own to work together for the noble cause," said Chen.