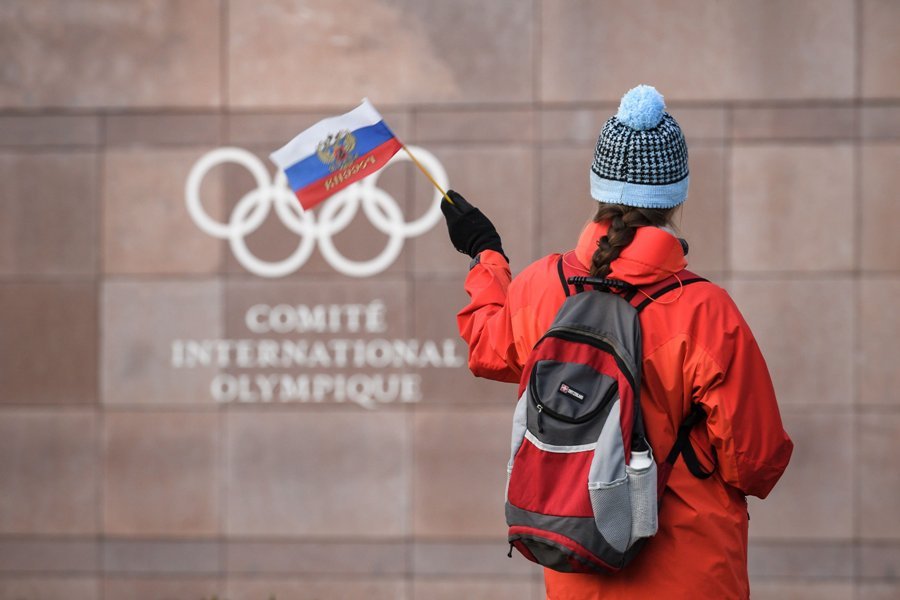 A supporter waves a Russian flag in front of the logo of the International Olympic Committee at its headquarters on Dec. 5, 2017 in Pully near Lausanne. (Xinhua/AFP)

"I think that the relevant organizations, I mean the Russian organizations whose competence includes all these issues, will have to think about challenging this decision," Medvedev said.

MOSCOW, Dec. 9 (Xinhua) -- Russian Prime Minister Dmitry Medvedev on Monday called the ruling by the World Anti-Doping Agency (WADA) to ban the country from international sports for four years as an "anti-Russian hysteria, which has acquired a chronic form."

"I think that the relevant organizations, I mean the Russian organizations whose competence includes all these issues, will have to think about challenging this decision," TASS news agency quoted Medvedev as saying at a meeting with his deputies.

Earlier on Monday, WADA's Executive Committee unanimously endorsed the recommendation by the independent Compliance Review Committee that the Russian Anti-Doping Agency, RUSADA, be declared non-compliant with the World Anti-Doping Code for a period of four years.

The move will prevent Russia from having any formal presence at the 2020 Summer Olympics in Tokyo.

RUSADA will have three weeks to appeal WADA's decision. The Court of Arbitration for Sport would be responsible for hearing an appeal.

According to the WADA ruling, in four years, only "clean" Russian athletes will be allowed to participate in major sports events if they can provide the necessary proof, and even then they will not be able to represent Russia. Russia will also be banned from hosting any major sports events.

Russia had been banned by the International Olympic Committee from last year's Pyeongchang Winter Games as punishment for alleged state-sponsored doping at the 2014 Sochi Winter Olympics. But some Russian athletes with no history of doping were cleared to compete as neutrals. ■