The relationship between China and the United States is facing challenges from the ongoing trade dispute initiated by the current U.S. administration. However, enthusiasm for sub-national exchanges and cooperation on both sides remain robust.

WASHINGTON, Nov. 23 (Xinhua) -- Hundreds of visitors in Washington D.C. enjoyed a lively show of lion-dancing, the presence of two oversized giant panda mascots, and a taste of Chinese cuisine and snacks.

To commemorate the 35th anniversary of its sister-city relationship with Beijing, Washington D.C. hosted a series of events this week, presenting an opportunity for the two capitals to reflect on their constructive ties.

While hailing the milestone, both sides agreed that the relationship has brought the two cities closer. They called for broadening ties to set an example for relations at the sub-national level between China and the United States. 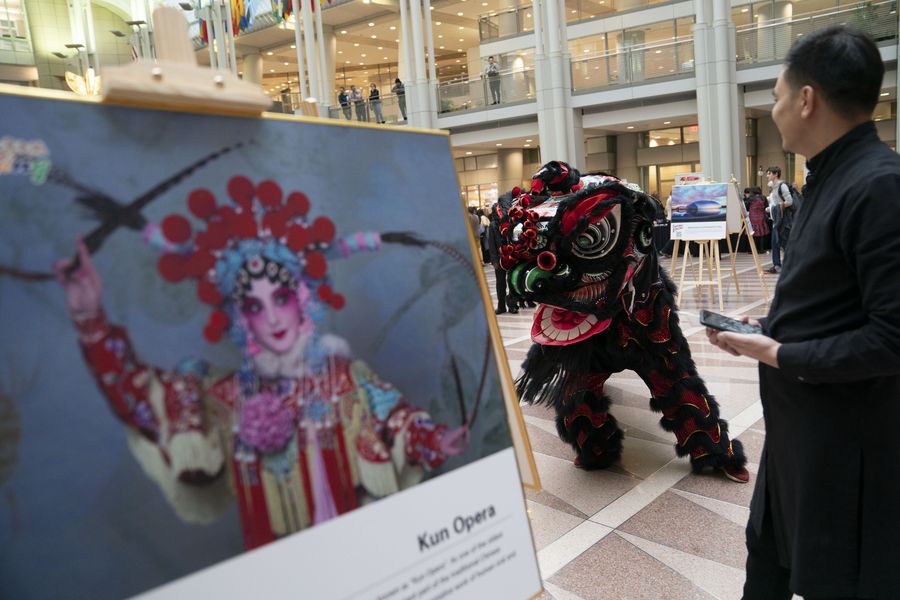 A man watches a lion dance performance during the 2019 Beijing Day Cultural Festival at the Ronald Reagan Building in downtown Washington D.C., the United States, on Nov. 22, 2019. (Xinhua/Liu Jie)

As part of the celebration, the 2019 Beijing Day Cultural Festival was staged on Friday at the Ronald Reagan Building in downtown Washington D.C.

Executive Vice Mayor of Beijing Lin Keqing, who headed a delegation to Washington D.C. to mark the anniversary, welcomed the attendance of local residents to the event and expressed his desire to promote the Chinese capital.

The fest, co-sponsored by the Beijing Municipal Government and the Office of the D.C. Secretary, showcased some features of traditional Chinese culture, including paper-cutting, fan-painting, and calligraphy, as well as a photo exhibition displaying Beijing's landmarks and moments of some notable events the city held.

A group of teenagers played Jianzi, a traditional Chinese sport where players kick a feathered shuttlecock and are prohibited from using their hands.

Jan Kalicki, a visitor who works at the Wilson Center, a Washington D.C.-based think tank, told Xinhua that he thinks the event is "a wonderful expression of variety in China."

"I find all of the photographs showing the variety of Beijing are really very impressive," said Kalicki, while pointing to a photo of the Bird's Nest, the main stadium of the 2008 Beijing Olympic Games, as his favorite. He said he would like to return to Beijing after visiting several years ago. 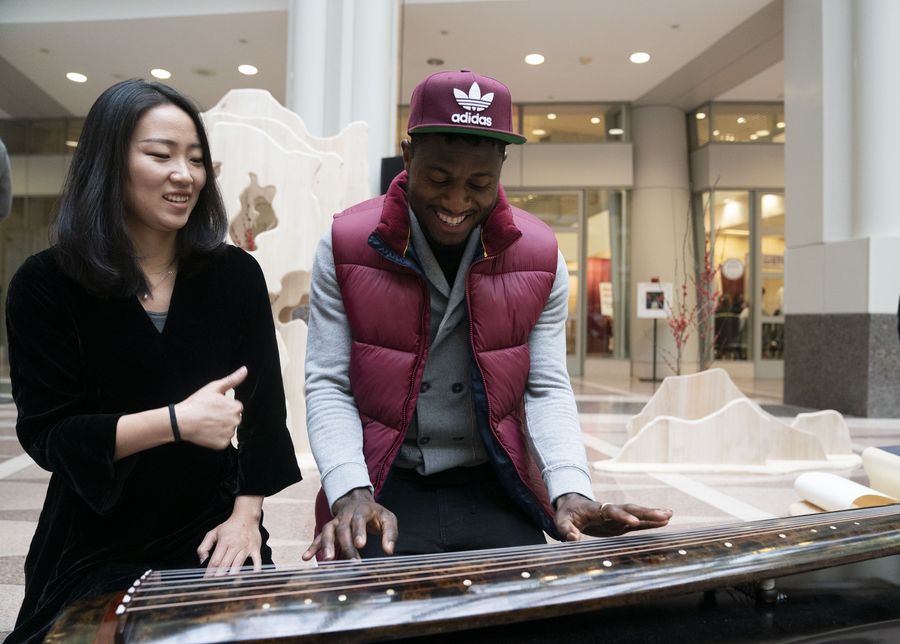 A man learns to play the Guqin, a traditional Chinese musical instrument, during the 2019 Beijing Day Cultural Festival at the Ronald Reagan Building in downtown Washington D.C., the United States, on Nov. 22, 2019. (Xinhua/Liu Jie)

During a concert at the Ronald Reagan Building on Thursday night to kick off "the Beijing Day" event, Chinese artists performed an ensemble with the Guqin, a classical Chinese musical instrument that has a history of thousands of years.

Beijing and Washington D.C. "have developed a strong friendship with each other, and become a role model of sister-city exchanges," said Cui Tiankai, Chinese ambassador to the United States.

For the past 35 years, Beijing and Washington D.C. have deepened exchanges and cooperation in various areas, allowing them to "forge a friendship as solid as mountains and as long-running as rivers," according to Lin.

Sister-city ties between China and the United States began shortly after the two nations established a diplomatic relationship in 1979. Beijing and Washington D.C. twinned in 1984. 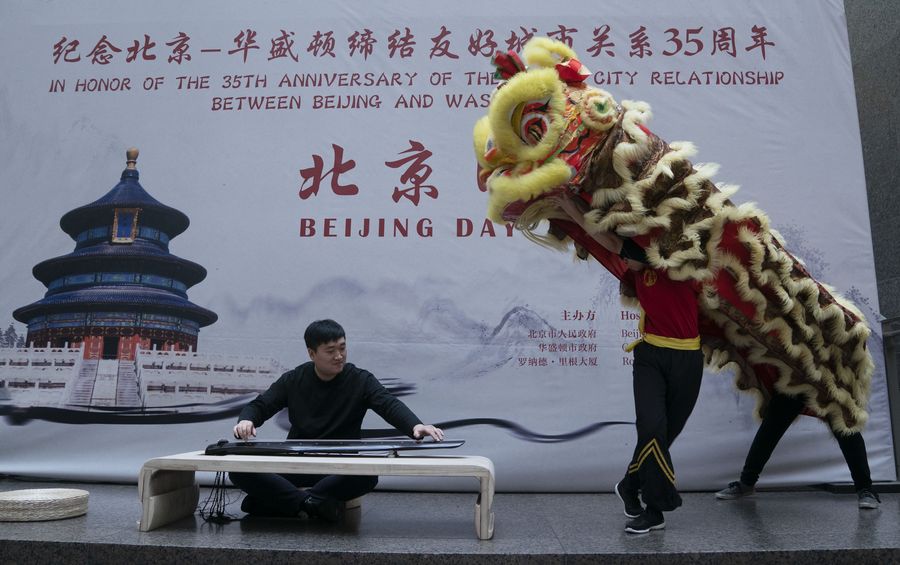 A lion dance performance is staged during the 2019 Beijing Day Cultural Festival at the Ronald Reagan Building in downtown Washington D.C., the United States, on Nov. 22, 2019. (Xinhua/Liu Jie)

Over the decades, the two cities have worked together to bolster ties. In 2013, Washington D.C. joined the Beijing-proposed World Tourism Cities Federation. A year later, China Airlines launched a direct air route between the two capitals.

Mayor Muriel Bowser of Washington D.C., in her remarks on Thursday, recalled a number of "successes" of the sisterhood, including the refurbishing of the Friendship Arch, a well-known landmark in the U.S. capital's Chinatown neighborhood, the establishment of a D.C. office in Beijing, and collaboration between artists and schools in both cities.

"There are a lot of opportunities because China is so large, it's such a large population, a lot is happening," De Souza said, noting that there's equal enthusiasm on both sides.

"For 40 years, friendship and cooperation have been a keynote of China-U.S. relations. There is a lasting driving force for our relations to move forward," said Cui.

"The sister-city relationship is an important way to enhance the people's friendship and sub-national cooperation. It provides a strong momentum for bilateral relations between the two countries," he added.

Kalicki said he believes the relationship between Beijing and Washington D.C. is an important part of ties between China and the United States, while expressing hope for stronger people-to-people exchanges in the future. 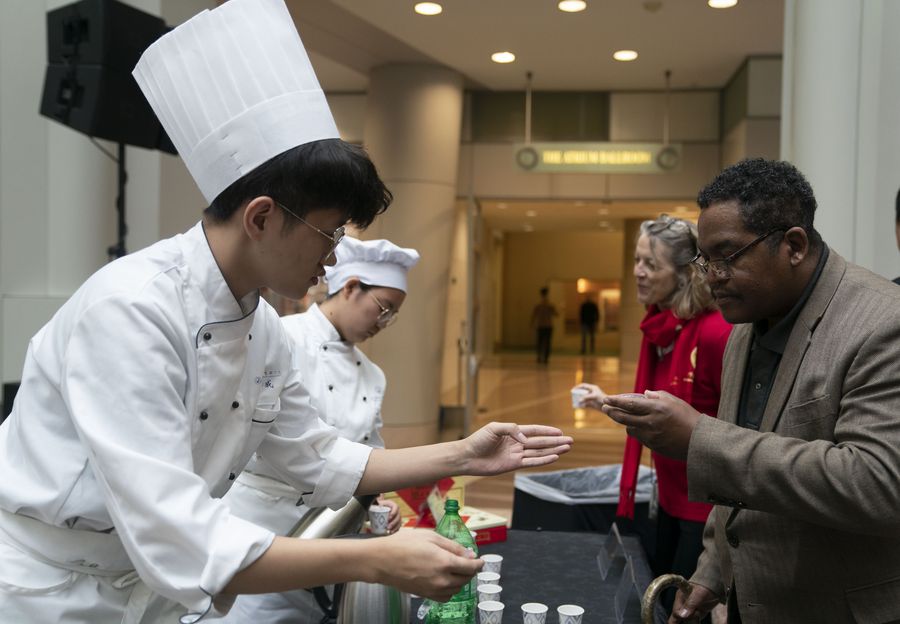 The relationship between China and the United States is facing challenges from the ongoing trade dispute initiated by the current U.S. administration. However, enthusiasm for sub-national exchanges and cooperation at different levels and in various areas between the two sides remain robust.

"China does everything faster. I mean you build cities in a blink. You build rail lines. You build roads," Hughes said. "We have to catch up and speed up, but we can do those together and I think that powerful example will spread."

Proficiency in language and culture are key for mutual understanding.

For decades, studying English has been a part of curriculums for Chinese students nationwide. Nowadays more students in the United States are studying Chinese as a second language. 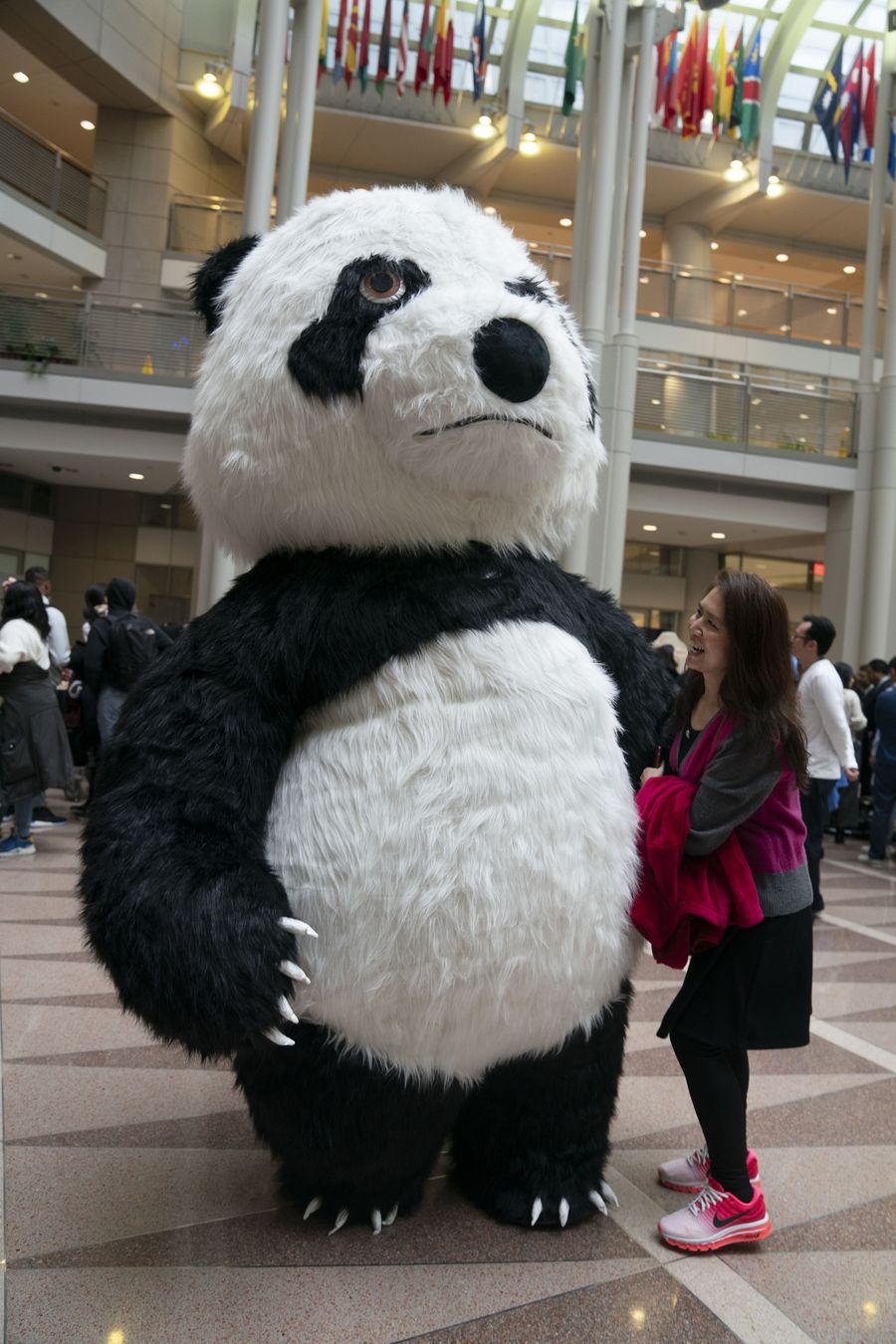 A woman stands by a giant panda mascot during the 2019 Beijing Day Cultural Festival at the Ronald Reagan Building in downtown Washington D.C., the United States, on Nov. 22, 2019. (Xinhua/Liu Jie)

Diedre Neal, principal of Alice Deal Middle School in northern Washington D.C., told Lin during his visit on Thursday that the number of students studying Chinese at the school has more than doubled from 10 years ago, stressing that parents and the city's educational authorities are "supportive" of the courses.

NaKeitha Anyamele-Latney, a U.S. federal government employee who has been learning Chinese since she was a teenager, told Xinhua on Friday during the Beijing Day event that her interest in Chinese culture and language originated from her crush on Hanzi, or Chinese characters.

"I looked at it as art and so just going deeper and deeper into it and realizing where it comes from made me want to explore the Chinese culture," Anyamele-Latney said.

Asked if she wants to play a role in forging closer ties between China and the United States? "Absolutely. If there's any opportunity for me to bridge that, I would be glad to help."■