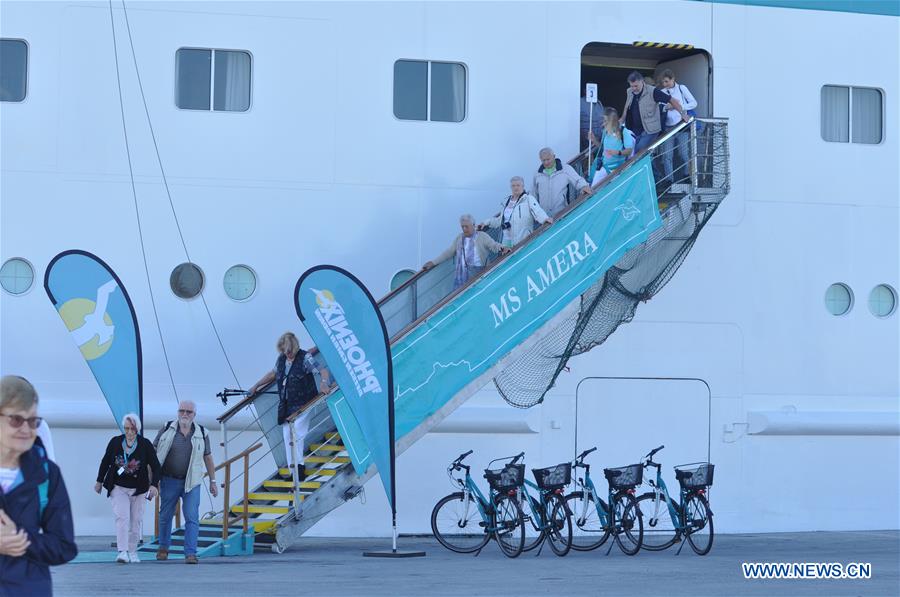 European tourists step down from a cruise that docked at the port of La Goulette in Tunis, Tunisia, Nov. 14, 2019. The cruise of MS Amera with more than 1,000 European tourists onboard arrived at the port of La Goulette on Thursday. Tunisia witnessed a slump in its tourism since 2015 when the country was hit by terrorist attacks. In recent years, the local security situation of Tunisia has improved and foreign tourists have gradually increased. (Photo by Adele Ezzine/Xinhua)

TUNIS, Nov. 14 (Xinhua) -- Amera, the first cruise ship anchored on Tunisian coasts since 2015, arrived on Thursday in the northern suburb of Tunis with 1,090 passengers.

According to the port of La Goulette, this is the first cruise ship stopped on the Tunisian coasts since the terrorist attack of Bardo Museum in Tunis in 2015, in which 22 tourists were killed.

"This cruise ship came from Malta and resumed its journey to Italy later," said Tunisian Minister of Tourism and Handicraft Rene Trabelsi, who was welcoming the tourists when they arrived at the wharf.

"The anchoring of the Amera ship in the port of La Goulette is the beginning of the revival of cruise tourism in Tunisia," the minister noted.

Trabelsi stressed that the ministry would seek to attract cruise tourism to other Tunisian areas.

Wissem Bouchnak, the financial director of the port, estimated that Tunisia will host no less than 10 cruise ships in 2020 and the number is expected to increase in 2021.