Achievements of China's Project Hope in past 30 years 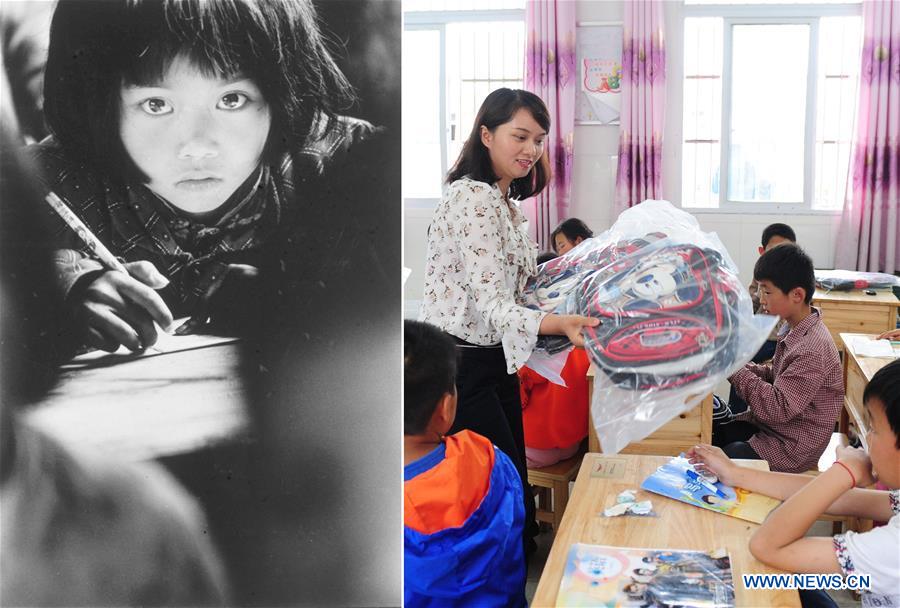 Combo photo shows Su Mingjuan at class in this promotional photo of Hope Project (L, file photo by Xie Hailong) and Su giving gifts to students in Jinzhai Sanhe experimental school, her alma mater in Jinzhai, east China's Anhui Province, May 29, 2019 (R, photo by Wong Congqi). Su Mingjuan, from the hinterland of the Dabie Mountains, became a symbol of Project Hope when this innocent photo of her(photo in the left) moved the country in the 1990s. After graduation from college, Su was employed by a bank, and every year she provides money to aid students in need. Project Hope, a Chinese program aiming at financing education for poverty-stricken students, celebrates its 30th anniversary on Oct. 30, 2019. The project was initiated by the China Youth Development Foundation (CYDF) and the Central Committee of the Communist Youth League of China in 1989, and has been supported by people from all walks of life since its establishment. As of September in 2019, Project Hope has received 15.23 billion yuan (about 2.16 billion U.S. dollars) in donations and aided over 5.99 million students in financial difficulty. A total of 20,195 primary schools were also built, according to the CYDF statistics. (Xinhua)