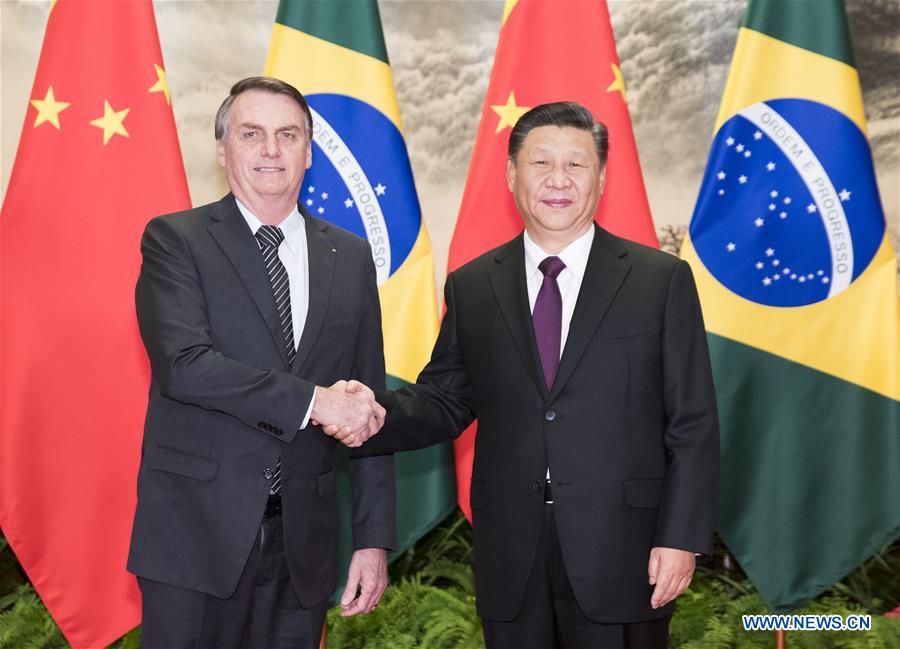 Xi's remarks came as he held talks with Brazilian President Jair Messias Bolsonaro at the Great Hall of the People in Beijing.

Xi said the world today is marked by changes unseen in a century, but the trend of the times featuring peace, development and win-win cooperation remains unchanged, and the momentum of collective rise of countries of emerging markets like China and Brazil remains unchanged.

As the most representative emerging market countries and biggest developing countries of the east and west hemispheres, China and Brazil have been role models of solidarity and cooperation for common development since the two forged diplomatic ties 45 years ago, said Xi.

He called on both countries to view each other as development opportunities, prioritize the relations with each other in their foreign policies, and push forward the China-Brazil comprehensive strategic partnership.

The two countries need to give full play to the strategic guiding role of the high-level exchanges, understand and support each other's core interests and increase political mutual trust, said Xi.

He encouraged both sides to cultivate new areas of cooperation and make scientific innovation and digital economy as new growth drivers.

Xi said the two countries need to enhance people-to-people exchanges, especially in the areas of football and traditional Chinese medicine, and cooperation between local areas.

He called on both sides to safeguard multilateralism and oppose protectionism and unilateralism, so as to push forward the world economy to develop in a balanced, inclusive and sustainable way and promote a more just and equitable international order.

Bolsonaro congratulated on the 70th anniversary of the founding of the People's Republic of China. Calling China "a great cooperation partner," Bolsonaro said though the two countries are far away from each other, they share similar views.

China has become Brazil's biggest trade partner, he said, adding that his visit proved the closeness of Brazil-China friendship and witnessed the highlights of bilateral relations.

He said he is willing to work with Xi to further lift bilateral relationship to benefit both peoples.

Bolsonaro expressed hope to expand bilateral trade and investment, deepen cooperation in the areas of science and technology, aerospace and sports, adding that Brazil will open its market to welcome Chinese enterprises to invest in its infrastructure construction and oil and gas development.

Bolsonaro expressed appreciation that China unequivocally speaks for developing countries including Brazil in international settings, saying that Brazil will firmly adhere to the one-China policy and work with China to safeguard multilateralism and free trade.

Xi said China has always supported Latin American people in choosing their own development paths and Latin America in speeding up integration, adding that China would like to build a China-Latin America community with a shared future.

After the talks, the two presidents witnessed the signing of a series of bilateral agreements. During the visit, the two countries issued a joint statement. Prior to the talks, Xi held a welcoming ceremony for Bolsonaro.

Bolsonaro is paying his first state visit at the invitation of Xi. He arrived in Beijing Thursday afternoon and will leave on Saturday.