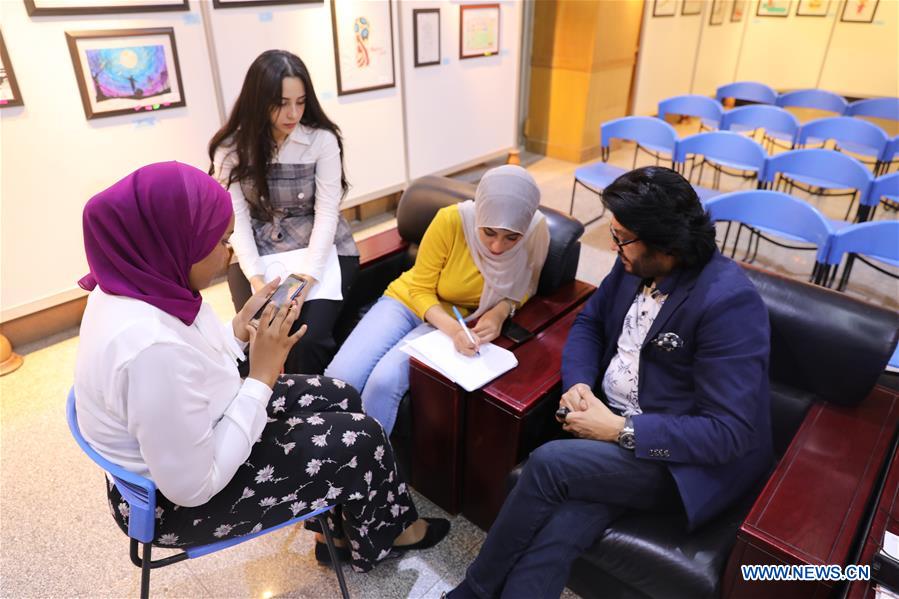 CAIRO, Oct. 17 (Xinhua) -- Their faces looked Egyptian but they sang in Chinese. That was an Egyptian 10-member band who gathered around a piano on stage in the theater hall of the Chinese Cultural Center in Cairo (CCC) for intensified rehearsals.

They were putting the final touches on their performances of Chinese songs ahead of China Shanghai International Arts Festival (CSIAF) that they will join later this month.

"I am very happy to lead these Egyptian young people who are very talented and fluent in Chinese and in performing Chinese songs," said Egyptian singer and actor Sameh Yousry.

The performers were selected as the best contestants of last year's Chinese singing competition at the CCC called "Egypt Sings."

"Such activities represent the real meaning of people to people exchange and interaction through art and culture," the Egyptian artist told Xinhua.

Yousry, also a jury member of "Egypt Sings" competition, said he's planning to present a song specially composed for CSIAF including Chinese, Arabic and English lyrics with the theme of humanity and mutual love and understanding.

The band members looked so excited and enthusiastic during the rehearsals, including 22-year-old Mai Abdou, who covered a long distance from Alexandria Province in northern Egypt, accompanied by her mother, to come to Cairo to attend the rehearsals.

"I attend each rehearsal on time because I am doing something I really love and I am thrilled that I will perform on a huge stage in Shanghai," the young woman told Xinhua.

"Communication with the Chinese people through these activities has improved my Chinese and increased my knowledge about the Chinese culture," she added, noting that she studies Chinese and Italian at Pharos University in Alexandria.

Her teammate Nourhan Mohamed, a 23-year-old graduate of the Faculty of Fine Arts, held a piece of paper with lyrics while practising on stage the song "Bubble" by Chinese pop singer Deng Ziqi.

"I was very happy to know that we're travelling to Shanghai and our team started to intensify rehearsals for the Chinese song competition in the festival," Mohamed said.

"Everyone of our team will perform a Chinese song and another in Arabic or English. I've chosen to perform 'Bubble' by Deng Ziqi and 'All of Me' by John Legend," she added.

During the rehearsals, Wael Awad, a man in his late 30s, was playing the piano while giving the singers voice training on the classic Egyptian songs they will perform.

"Art is a communication bridge between different cultures and music is a language that all peoples can understood," said Awad, a composer and fine artist who is responsible for orchestration in the band.

"So, I believe that the CCC is achieving a tremendous success as a cultural bridge between Egypt and China through music, art and cultural activities in general," he noted.

Hosted by China's Ministry of Culture and Tourism and organized by Shanghai Municipal People's Government, the 21st edition of the annual CSIAF will be held from Oct. 18 to Nov. 17 at the foreshore of Huangpu River.

Shi Yuewen, cultural counselor of the Chinese Embassy in Egypt and CCC chief, said many Egyptian youths are currently learning Chinese and most of them like Chinese music, and so they learn more about the Chinese culture.

The Chinese diplomat added that the Sino-Egyptian ties have been developing so fast particularly in recent years, as they surpassed political and economic domains to witness more cultural exchange between the two countries.

"CSIAF is a chance for Chinese-Egyptian cultural exchange, through which the Egyptian team will learn more about China and its culture. Their performance in Chinese will also impress the audience in Shanghai and make them curious about the Egyptian culture," Shi told Xinhua.