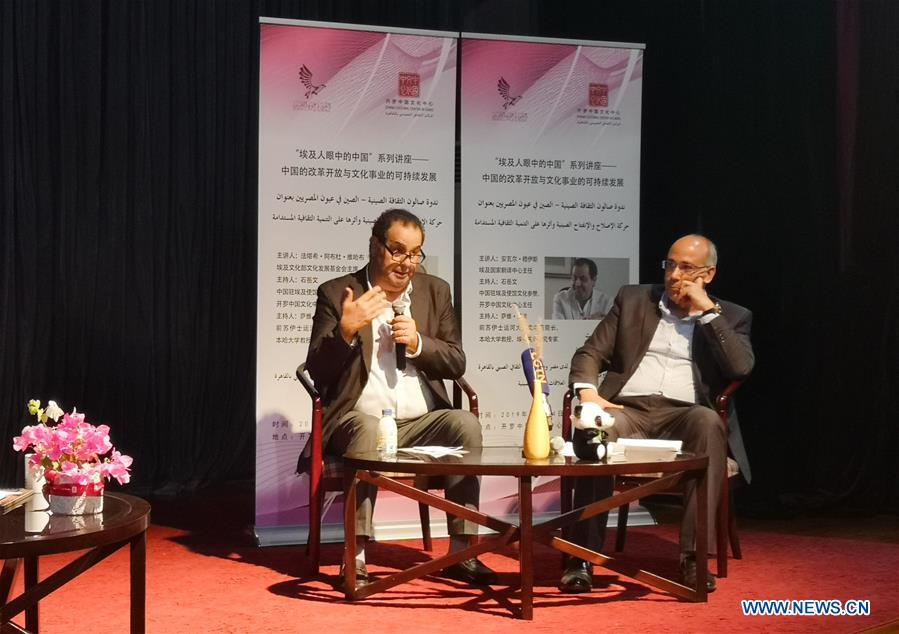 Anwar Mogheith (L), head of Egypt's National Center for Translation (NCT), and Fathy Abdel-Wahab, head of Egypt's Cultural Development Fund (CDF), attend a symposium at the Chinese Cultural Center in Cairo, Egypt, on Oct. 14, 2019. China's policy of reform and opening-up over the past four decades has enhanced China's cultural exchange with Arab world in general and Egypt in particular, said Egyptian officials during a symposium held on Monday evening at the Chinese Cultural Center in Cairo (CCC). (Xinhua/Wu Danni)

CAIRO, Oct. 14 (Xinhua) -- China's policy of reform and opening-up over the past four decades has enhanced China's cultural exchange with Arab world in general and Egypt in particular, said Egyptian officials during a symposium held on Monday evening at the Chinese Cultural Center in Cairo (CCC).

Anwar Mogheith, head of Egypt's National Center for Translation (NCT), and Fathy Abdel-Wahab, head of the country Cultural Development Fund (CDF), were the main keynote speakers of the symposium.

The NCT chief said China's development has led to growing popularity of the Chinese language among Egyptian learners and drawn the attention of NCT that translated about 20 books directly from Chinese to Arabic instead of translating from a medium language like English or French.

"We have translated more than 20 books on different aspects of China directly from the Chinese language, including those on the development of small and medium sized enterprises in China, the history of development of Chinese thought, the Chinese food culture, and the Chinese poetry," Mogheith told the attendees.

He explained that the growing Egyptian tendency to learn Chinese predicts a promising future in the domain of translation from Chinese to Arabic and vice versa.

"Since the mid-1990s, Egyptians have realized that China has become an influential element in human civilization, so language colleges started to open Chinese department and more students started to apply to learn the Chinese language," the NCT chief added.

Mogheith pointed out that China's opening-up is best represented in its Belt and Road Initiative (BRI), through which it seeks not just to promote its products, but to stretch hands for partnership and common development with BRI participating states.

During the symposium, Egyptian officials and experts expressed their belief that China's reform and opening-up policy has put China on the right path of economic development while introducing it to the outside world including Arabs, through economic ties and cultural activities.

"China well promoted its culture and the country is productive in terms of cultural industries represented in books, films, animation movies, TV series, radio programs and other cultural means," Abdel-Wahab said during the symposium.

The CDF chairman said that during several visits to China, he met with many Chinese people speaking Arabic, "which shows how China is very keen on approaching and communicating with Arab people."

The symposium was attended by dozens of visitors, including Egyptian university professors, parliamentarians, businessmen and students of Chinese language.

Ibrahim Mohamed, a junior student at the Chinese department of the Faculty of Arts, Cairo University, said that he attended the symposium to know more about the Chinese culture and to learn about the reform and opening-up policy that made China what it is today.

"Since I am a student of Chinese, learning more about the Chinese culture would help me in the field of Chinese translation in the future," the Egyptian student told Xinhua, noting that he joined several language, singing and dancing competitions at the CCC as part of cultural exchange.