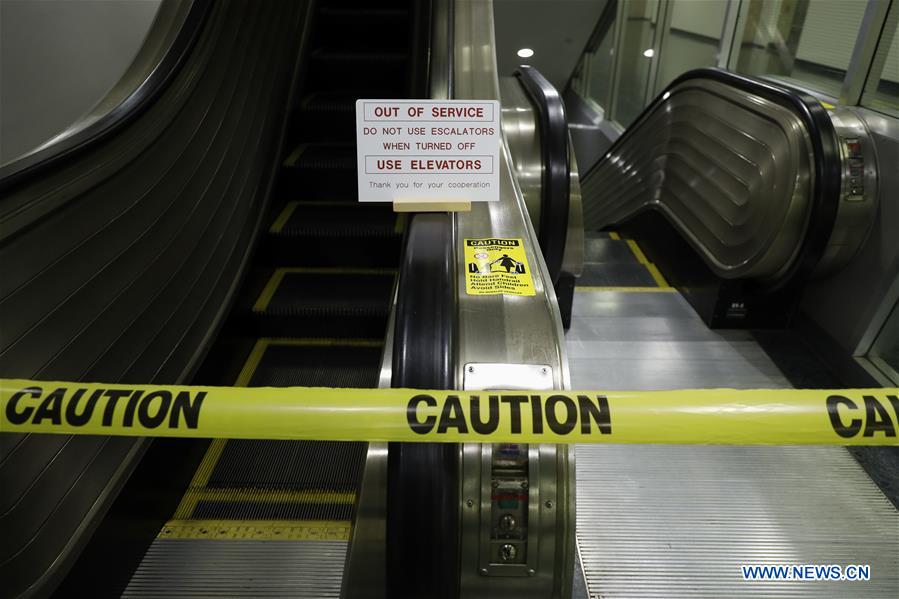 Escalators are out of service at the United Nations headquarters in New York, on Oct. 14, 2019. (Xinhua/Li Muzi)

UNITED NATIONS, Oct. 14 (Xinhua) -- The water fountain inside the compound of the United Nations headquarters in New York stopped functioning on Monday, which is part of the organization's effort to cut expenditure in order to tide over the worst financial crisis in a decade.

Entering the UN building, most escalators and some elevators stopped service, with a sign hung on each entrance of the motionless escalator, which reads "Out of Service. Do not use escalators when turned off. Use elevators."

The United Nations is facing a severe shortage of cash, and unless more governments pay their annual dues, "our work and our reforms are at risk," UN Secretary-General Antonio Guterres told member states Tuesday.

"This month, we will reach the deepest deficit of the decade. We risk exhausting the closed peacekeeping cash reserves, and entering November without enough cash to cover payrolls," the UN chief told the Fifth Committee of the UN General Assembly on the proposed program budget for 2020.

"Vacant posts cannot be filled, travel will be limited to essential travel only, meetings may have to be canceled or deferred, webcasting of non-mandated events will not be available, and support to meetings will have to be adjusted," he said.

"The Secretariat will no longer be able to support any non-mandated events after 6 p.m. These steps will affect our operations in New York, Geneva, Vienna and Nairobi and at the regional commissions," Guterres said.

In a letter dated Oct. 10, the UN chief told all heads of UN departments, offices and regional commissions that the organization would take strict and concrete measures to cut costs, hoping to tide over the worst financial crisis facing the organization in 10 years.

The UN chief also ordered to postpone purchases of goods and services, implement energy-saving and other measures to reduce utility bills and temporarily curtail expenses on managing facilities.

"It's too bad if I'm not paid next month," a security officer who insisted his name be kept secret said Monday. "I have a family to support."

The chamber of the Security Council, the UN's most powerful body, with "primary responsibility for the maintenance of international peace and security," did not have any meetings on the day with the doors left wide open to tourists.

The Trusteeship Council chamber, which used to keep its curtains closed tightly, had its curtains lifted up half way to let in a stream of light, obviously hoping to use some sunshine instead of wasting electricity.

A young couple happily and randomly took photos with an SLR camera with his wife in the audience section of the chamber, leaving their toddler crying loudly while the meeting was in process, who would be thrown out by security staff if they were paroling around.

"By the end of October, we are poised to surpass last year's record cash deficit of 488 million (dollars), and risk exhausting the closed peacekeeping cash reserves also," she warned.

Speaking to reporters on Friday, Pollard said that the United Nations is taking various measures to cut expenditure even including reducing heating and heating services starting Monday.

Echoing the remarks of the UN chief that the financial health of the organization "solely depends on member states meeting their financial obligations in full and on time," Pollard said "timely contributions are crucial to ensure a stable and predictable financial situation throughout the year."

As of Monday, 131 member states have been listed in the "Honor Roll," which includes countries that have already paid UN their assessments in full, while 62 other member countries are still tightening their purse strings.

"Some payments are coming in," said Stephane Dujarric, spokesman for the UN chief, at the regular briefing on Monday, noting the number will be calculated.

At the visitors lobby of the UN building, the statue of Nelson Mandela, with warm reaching out arms and a smile, ushered in one group of visitors after another.

The much-publicized 17 Sustainable Development Goals (SDGs), painted on the ground of the UN square, specially for the opening of the 74th session of the UN General Assembly, remain exceptionally visible.

The flags of member states, including those whose countries have not paid the budgetary assessments, were fluttering in the autumn breeze under the balmy sunshine.

"The Treasure Tripod Dedicated to the 21st Century," a gift of China to the United Nations in 1995, was standing firmly by the East River, with glistening light of waves reflecting on its surface.