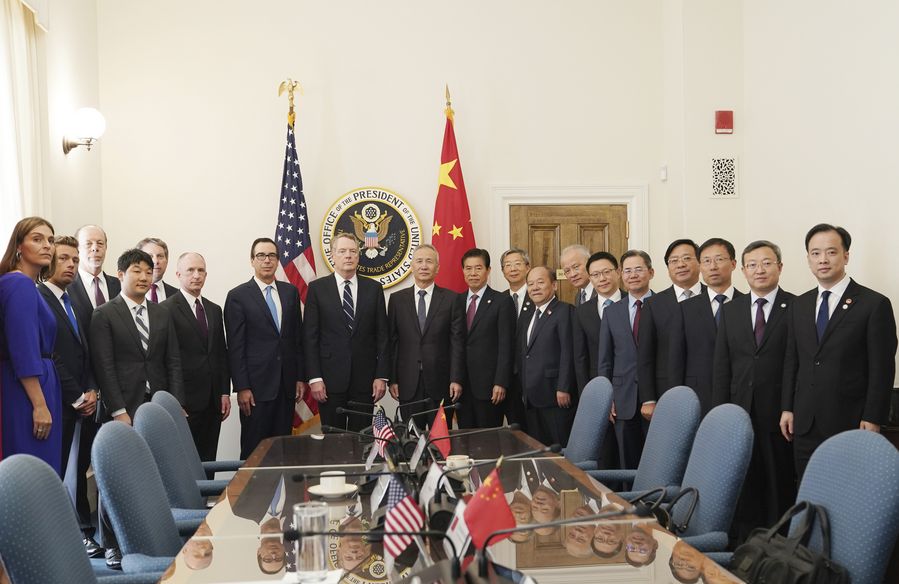 Chinese Vice Premier Liu He, also a member of the Political Bureau of the Communist Party of China Central Committee and chief of the Chinese side of the China-U.S. comprehensive economic dialogue, attends a new round of high-level economic and trade consultations together with U.S. Trade Representative Robert Lighthizer and Treasury Secretary Steven Mnuchin in Washington D.C., the United States, Oct. 10, 2019. (Xinhua/Liu Jie)

The hard-won progress is a relief to a global economy racked with uncertainties stemming from anti-globalization and anti-free trade sentiment in parts of the world.

BEIJING, Oct. 14 (Xinhua) -- China and the United States have achieved substantial progress in their lastest round of trade talks and that raises cautious optimism for an eventual deal.

Markets were up in an immediate response to the news, long-awaited in the protracted trade disputes between the world's top two economies.

U.S. President Donald Trump met with Chinese Vice Premier Liu He, who led the Chinese delegation in this round of negotiations, after the talks concluded.

This combo photo shows Chinese Vice Premier Liu He, also a member of the Political Bureau of the Communist Party of China Central Committee and chief of the Chinese side of the China-U.S. comprehensive economic dialogue, attending a new round of high-level economic and trade consultations together with U.S. Trade Representative Robert Lighthizer and Treasury Secretary Steven Mnuchin in Washington D.C., the United States, Oct. 10, 2019. (Xinhua/Liu Jie)

Calling the latest round of talks a "substantial phase one," Trump urged both sides to finalize the text of the deal at an early date and move forward with future negotiations.

Properly handling the bilateral trade relationship is in the interests of both countries and the world, Liu noted.

However, as part of one of the world's most important bilateral relationships, the U.S.-China trade dispute remains complex and leaves plenty to work out.

The progress made amid a tariff war initiated by the United States against China accords with the aspiration of the two peoples.

U.S. economic indicators, including an inverted yield curve seen in August, show how the trade war has negatively impacted the U.S. economy, businesses and the public. There is a willingness from all U.S. sectors to see an end to the trade dispute, which has raged on for more than a year.

With exports and manufacturing under pressure, China has maintained a growth rate of 6.3 percent in the first half of 2019 while being pushed to upgrade its industries and seek alternative markets. 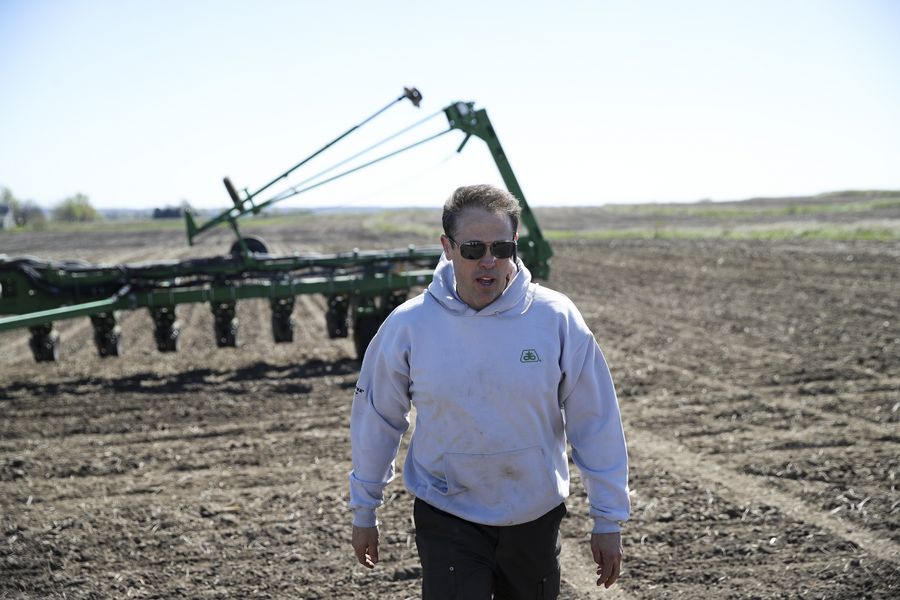 Grant Kimberley, a sixth-generation soybean farmer and marketing director of the Iowa Soybean Association, walks on a field of his family farm in Maxwell, Iowa, the United States, April 26, 2019. (Xinhua/Wang Ying)

Hailing the progress in trade talks, David French, senior vice president for government relations at the National Retail Federation, said he is "pleased that the administration has listened to the concerns of the business community as the trade war takes an increasing toll on the American economy."

"Although this is a step in the right direction, the uncertainty continues," he cautioned. "We urge both sides to stay at the negotiating table with the goal of lifting all tariffs and fundamentally resetting U.S.-China trade relations."

As Trump had ordered American businesses in China to leave in mounting pressure upon the Asian nation, Steven Paul Carpenter, head of Home Instead Senior in the central Chinese city of Wuhan, told Xinhua that he has no intention of shutting down his business in China and returning to the United States. "I will continue to operate here," he said.

Noting "the economies of the United States and China are highly integrated and this relationship has historically been beneficial to both countries," Carpenter said he also believes their cooperation in high tech "could provide lagging economies with opportunities" for development. 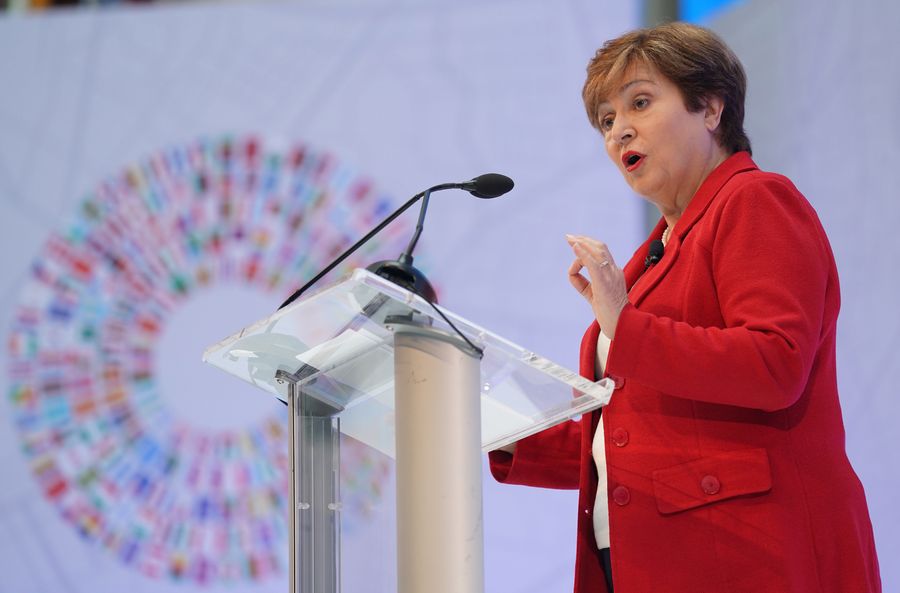 IMF Managing Director Kristalina Georgieva says the trade war between the United States and China is severely impacting the global economy and that her organization commends China's resolve and sincerity in addressing issues through negotiations.

The hard-won progress is a relief to a global economy racked with uncertainties stemming from anti-globalization and anti-free trade sentiment in parts of the world.

Good news from China-U.S. trade talks immediately sent a wave of gains on the markets and raised business confidence. Trade issues have been a big part of market anxieties since last year given their close relation to corporate earnings. 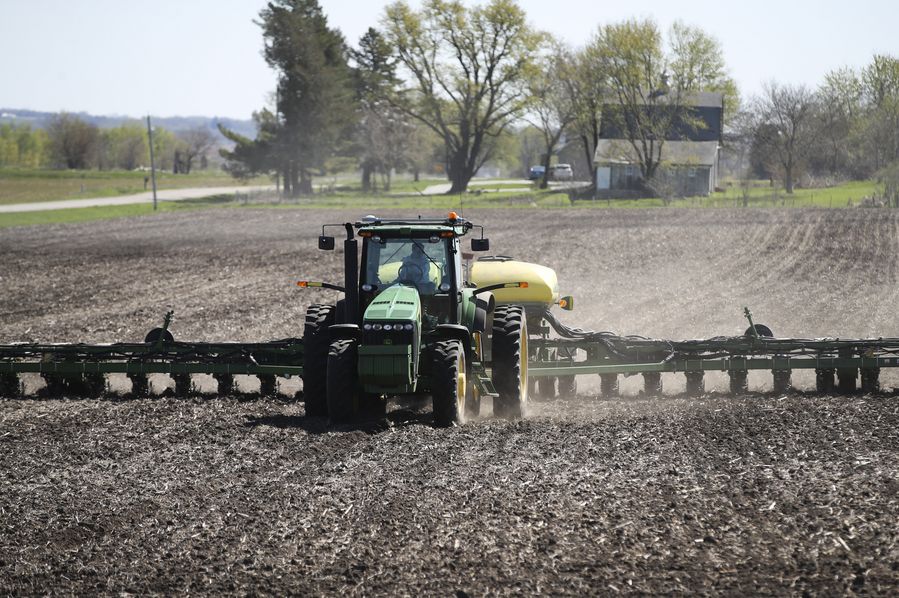 Wall Street finished significantly higher on Friday as market sentiment was underpinned by good news from the trade talks. Friday's rally helped the Dow and the S&P 500 to snap a three-week losing streak.

"Growth-related sectors of the S&P 500 rallied, outperforming all others along with oil. Gold, which is often seen as a safe haven play sold off and treasury yields climbed," Mark Otto, a New York Stock Exchange (NYSE) Designated Market Maker and Global Market Commentator at GTS, told Xinhua on Friday.

Peter Tuchman, an experienced trader on the floor of the NYSE, said, "Obviously, the market has been waiting and hoping anxiously about a trade deal with China."

"The market responded positively to all of that hope and the good news," he added. ■