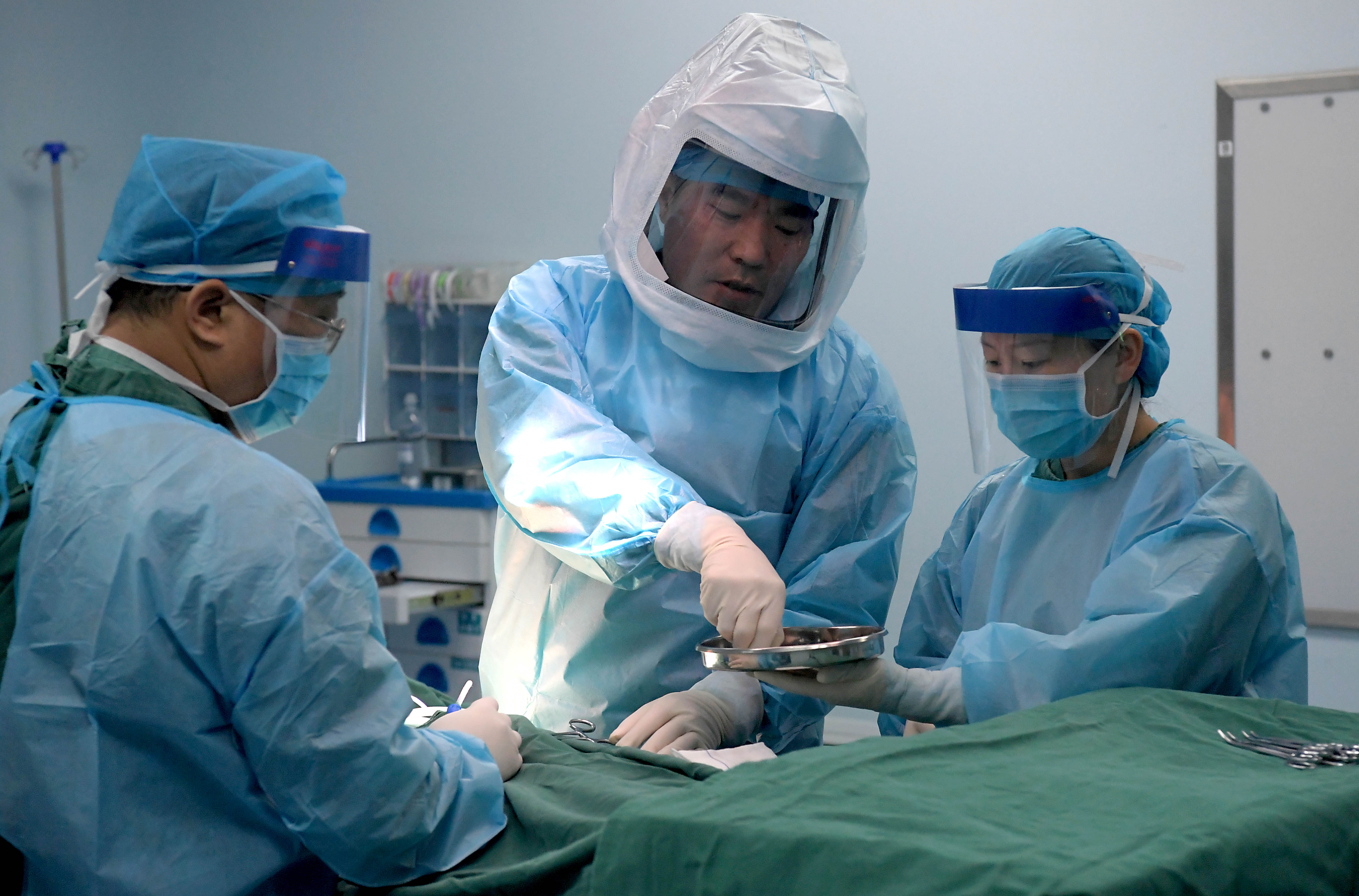 A doctor picks a surgical instrument at the operation room of Henan Infectious Disease Hospital in Zhengzhou, capital of central China's Henan Province, July 31, 2019. (Xinhua/Li An)

China designated Aug. 19 as Medical Workers' Day last year to call for respect from society for the country's medical and health workers.

BEIJING, Aug. 19 (Xinhua) -- After winning praise for saving a man from a fatal cardiac arrest in downtown Beijing a month ago, Liu Huiying and Lu Shasha, two young women nurses from Peking Union Medical College Hospital, are encouraged by online benedictions ahead of this year's Medical Workers' Day.

"I think the Medical Workers' Day is not only a recognition of medical workers' contributions but also a reminder for all of us to work harder," said Liu.

The country has about 3.6 million qualified physicians and 4.1 million registered nurses. They have formed a strong force to support the most significant medical service system in the world of safeguarding the health of 1.4 billion people in China.

China designated Aug. 19 as Medical Workers' Day last year to call for respect from society for the country's medical and health workers.

On Sina Weibo, a micro-blogging site and major social media platform in China, the festival has become a trending topic which garnered 130 million views.

In the eyes of the majority, doctors are like matches, and they burn themselves up to give others lights.

Zhou Nan, who volunteered to work as a medical specialist in the remote areas in southwest China's Tibet Autonomous Region upon her graduation from university in 2009, died early this month at the age of 37, after having devoted her life to providing medical treatment to patients in Tibet.

On the plateau, Zhou committed herself to offer treatment for local people. In the meantime, she focused on improving medical solutions for rheumatism regardless of the harsh conditions.

"What a loss! You should live a longer life," commented a microblogger. "You are like a flashing light, shining but evanescent," read another comment on Sina Weibo.

Zhou is just one of 1.38 million medical doctors who have been working in the country's remote and impoverished rural areas.

Deng Qiandui, a village doctor from one of the most impoverished villages in southwest China's Yunnan Province, is also remembered by Chinese people for commuting with cables and pulleys.

Over the past few decades, Deng has made more than 5,000 outpatient visits, treated more than 130,000 patients and traveled over 60,000 km on mountain roads, which has won him the title -- "cable doctor" -- among locals.

"It is hard to imagine how dangerous it is to cross a river by using cables and pulleys, Deng's story really moved me," commented a user on Sina Weibo. "Doctors are like guardians of our life, they bring us hope," read another comment.

Apart from touching stories of doctors dedicated to their job, a rap song depicting the real-life of millions of Chinese doctors was so popular that it became a meme several days ahead of the festival.

Written by a doctor from southwest China's Sichuan Province, the song unfurls with hilarious words, a rhythmic melody, as well as a funny music video. It aims to show the daily routines of doctors who are just ordinary people and do not want to be deified.

The music video has garnered more than 8.77 million views on the Tencent Video website, one of China's major video platforms.

More than just being promoted by mainstream media outlets, the music video was shared on several social media platforms. Many viewers said they were touched by the hard work of doctors after watching the video and will show more respect to them.

"Being a doctor is quite challenging. I hope there will be more mutual understandings between doctors and patients," read a comment on Tencent Video.

The heroic deeds of many doctors and the sincere blessings from people all over China have profoundly inspired and encouraged Liu and gave her impetus to work harder.

She will be on duty as usual on the day of the festival this year. For her, it is the best way to celebrate the occasion.

"The celebration will help promote a better atmosphere of respecting medical workers, as the understanding between doctors and patients should go both ways," Liu said.