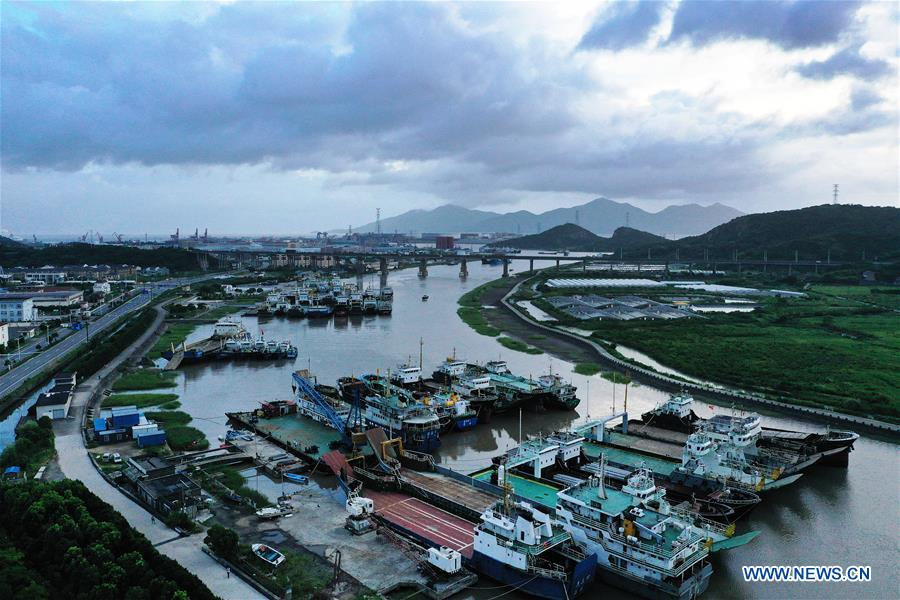 Photo taken on Aug. 8, 2019 shows ships berthed at a harbor in Zhoushan, east China's Zhejiang Province, Aug. 8, 2019. Provinces on the east coast of China have been busy getting prepared as Lekima, the ninth typhoon of the year, is moving northweastwards toward the mainland. (Photo by Yao Feng/Xinhua)

BEIJING, Aug. 8 (Xinhua) -- Provinces on the east coast of China have been busy getting prepared as Lekima, the ninth typhoon of the year, is moving northweastwards toward the mainland.

Lekima is expected to make landfall in the coastal areas of Zhejiang Province at a speed of over 15 km per hour on Saturday, according to the province's disaster prevention and relief office Wednesday.

The State Flood Control and Drought Relief Headquarters on Wednesday issued a circular to seven provinces including Zhejiang, Fujian, Jiangsu and Shanghai Municipality, asking related authorities to launch emergency response systems in time and be well prepared prior to the landfall of the typhoon so as to reduce potential damages.

Lekima strengthened into a typhoon Wednesday morning. Meteorological experts say the typhoon is expected to land with a rising intensity and will last for an extended period, bringing heavy rainfall.

Zhejiang will be most heavily impacted by the typhoon with extreme gusts of greater than 180 km per hour hitting the surrounding waters near the typhoon eye, said Ling Zhifeng, deputy head of Zhejiang's disaster prevention and relief office.

Shanghai will see intense rainfall from Thursday to Sunday due to the typhoon and strong gusts of wind are expected to hit its coastal area, according to the city's meteorological department.

Shandong's weather authorities said secondary disasters such as torrential floods are likely to strike parts of the province while rainstorms will last from Saturday night until next Monday, however the downpours will help ease drought concerns and replenish reservoirs.

The State Flood Control and Drought Relief Headquarters also asked related departments and authorities to intensify real-time monitoring of weather changes, issue alerts promptly by means of the internet and text messaging and launch emergency response systems before the landfall.

Efforts should be made to strengthen evacuation and relocation in key areas, such as areas prone to flooding and geological disasters, old residential communities and tourist attractions, and reinforce structures such as billboards and tower cranes.

The Ministry of Emergency Management also called for enhanced inspection and maintenance of drainage systems and flood-control facilities in urban areas.