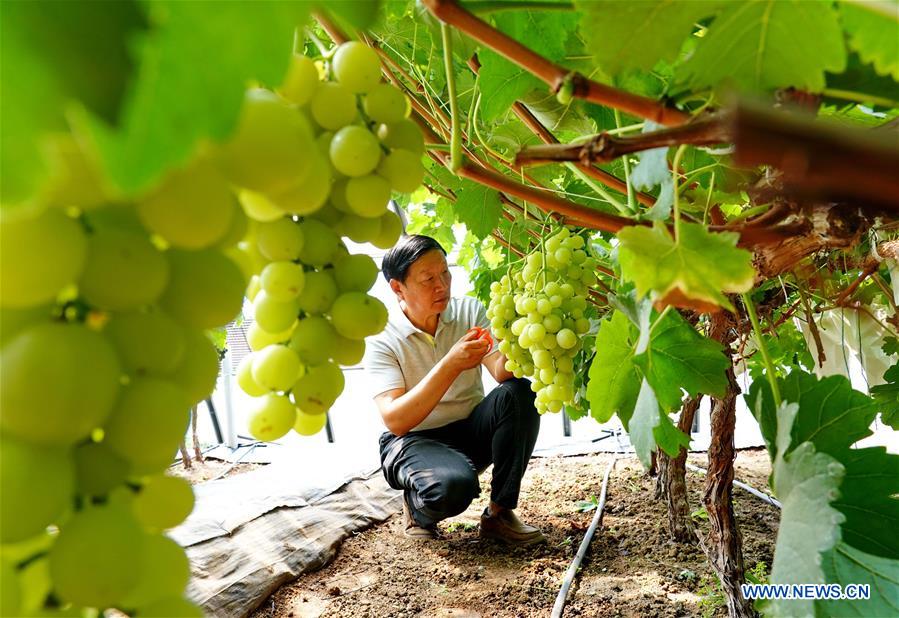 Zhao Shengjian, deputy director of Changli orchards research institute of Hebei Academy of Agriculture and Forestry Sciences, takes care of newly cultivated grapes at the breeding base of the institute in north China's Hebei Province, July 13, 2019. China's agriculture sector has seen rapid growth over the past 70 years, with grain output expanding 4.8 times, according to a report from the National Bureau of Statistics (NBS). China's grain output grew at an average annual rate of 2.6 percent from 1949 to reach 658 billion kg in 2018, managing to feed around 20 percent of the world's population with only less than 9 percent of the world's arable land, according to the report. The country increased the diversity of food supply by developing the breeding industry, with the output of aquatic products ranking first in the world since 1989, which stood at 64.6 million tonnes in 2018, 143 times higher than 1949. The structure of the agriculture industry was continuously optimized, with a modern pattern promoting all-round development of farming, forestry, animal husbandry and fishery replacing the traditional farming pattern, the NBS said. Scale operation of agriculture was enhanced by the progress of rural land circulation. Over 35 million hectares of family contracted farmland was circulated in 2018, posing a sharp contrast to the 58 million mu in 2004. The country also fostered new types of entities of agricultural production and service. By the end of 2018, 600, 000 family farms and 2.17 million farmer cooperatives had been registered. (Xinhua/Yang Shiyao)