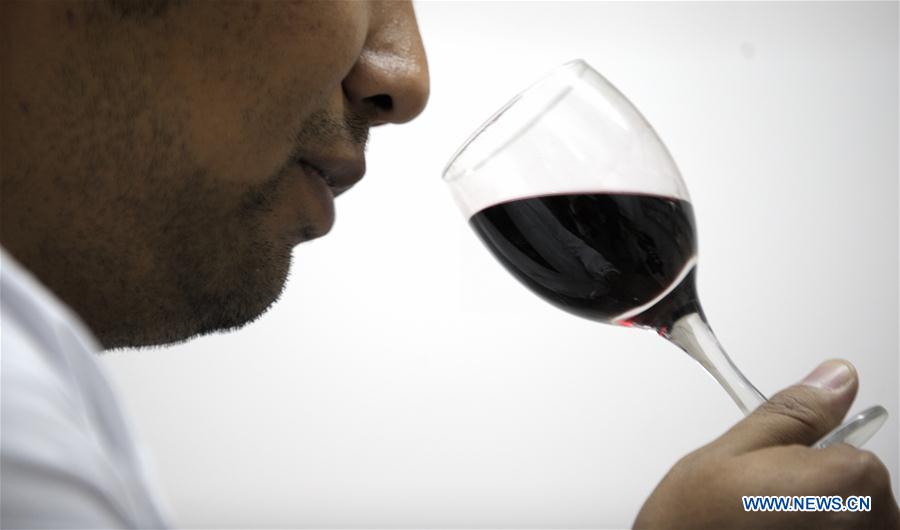 Photo taken on Oct. 14, 2011 shows Dr. Gao Jie, an oenology expert, tasting wine at a winery at Naxi Township, Mangkam County, Chamdo, southwest China's Tibet Autonomous Region. Tibetans generally serve guests highland barley wine. In a township 1,000 km from Lhasa, capital of Tibet Autonomous Region, where some people of the ethnic Naxi group live, locals welcome guests with indigenous red wine instead. The township gets its name from the ethnicity of the inhabitants -- the ethnic Naxi people, though most of whom live in Yunnan Province, Tibet's neighbor. Under the jurisdiction of Mangkam County, Chamdo, Naxi Township is the only area for the Naxi minority in Tibet. It has an average altitude of 2,600 meters and a total population of 4,557. According to the annals of Mangkam County, a French missionary traveled to the township in the 19th century, bringing grape seeds and teaching locals to make wine. Grape plantation and wine-making have taken roots in the ethnic Naxi people since then. Red wine has therefore become a local specialty product there. Almost every family in the township knows how to make red wine through traditional natural fermentation methods. Apart from drinking red wine, local residents also sell them. Without fancy and expensive packaging boxes, red wine produced by Tibet's Naxi people has gained popularity and has been playing an important role in helping locals shake off poverty in recent years. (Xinhua/Purbu Zhaxi)