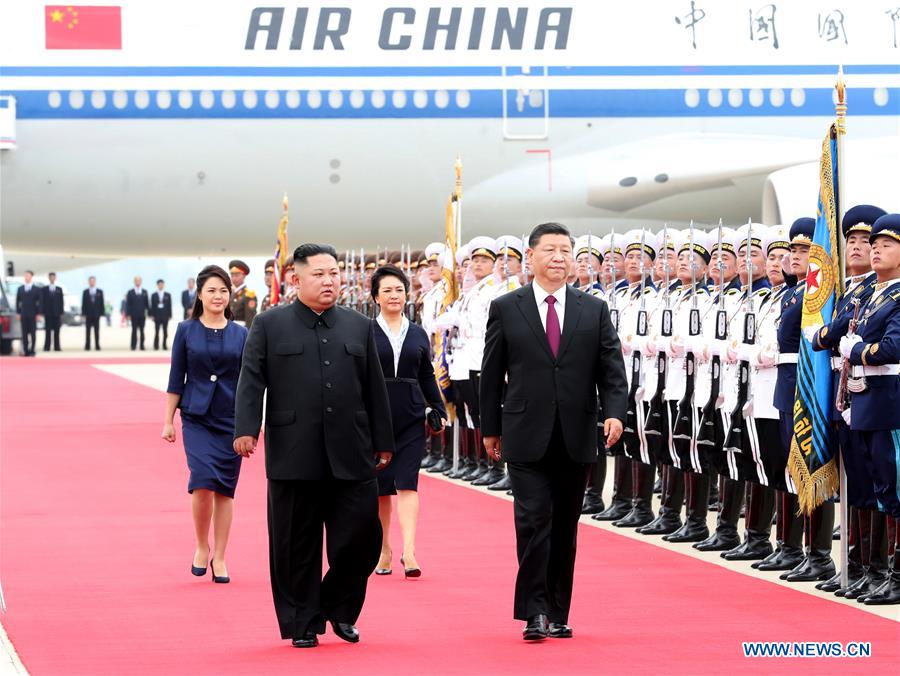 A grand welcome ceremony is held by the Democratic People's Republic of Korea (DPRK) side for General Secretary of the Central Committee of the Communist Party of China (CPC) and Chinese President Xi Jinping at the Sunan International Airport in Pyongyang, DPRK, June 20, 2019. Xi Jinping arrived here Thursday for a state visit to the DPRK. Xi and his wife, Peng Liyuan, were greeted beside the ramp by Kim Jong Un, chairman of the Workers' Party of Korea (WPK) and chairman of the State Affairs Commission of the DPRK, and his wife, Ri Sol Ju. (Xinhua/Huang Jingwen)

BEIJING, June 22 (Xinhua) -- When Chinese top leader Xi Jinping on Thursday arrived in the Democratic People's Republic of Korea (DPRK), hundreds of thousands of people lined up along the roads and streets, waving flags and flowers and chanting "Long Live the China-DPRK Friendship" and other slogans to show their welcome.

Kim Jong Un, chairman of the Workers' Party of Korea and chairman of the State Affairs Commission of the DPRK, welcomed Xi, general secretary of the Central Committee of the Communist Party of China (CPC) and Chinese president, at the airport and accompanied the Chinese guest for various activities during the two-day visit.

As the two leaders agreed to stay true to their original aspirations and join hands to create a bright future of bilateral relations at a new starting point in history, Xi's visit was widely hailed as a visit of friendship and peace to consolidate China-DPRK friendship and promote a political solution to the nuclear issue in the Korean Peninsula.

Xi's visit, the 5th gathering with Kim in 15 months, came at a time when the two countries celebrate the 70th anniversary of the establishment of diplomatic relations.

The Chinese leader Thursday hailed the traditional friendship between the two countries a shared valuable asset forged and left by leaders of elder generations of both countries at a welcome banquet.

For his part, Kim said that in their joint socialist construction endeavor, the DPRK and China have already formed a tradition of sharing weal and woe as well as supporting and cooperating with each other, adding that he and Xi have confirmed upholding the socialist system is the core of maintaining the DPRK-China friendship.

In talks between the two leaders on Thursday, Xi said that by reviewing the development of China-DPRK relations, an insightful conclusion can be drawn that it is the essential attribute of the relationship that both are socialist countries adhering to the leadership of a Communist party.

Shared ideals, beliefs and goals are the driving force of the relationship, the continuous friendship between and strategic guidance by top leaders are the greatest strength, and the geographical proximity and cultural affinity offer a sturdy bond, he added.

On Friday, Xi paid homage to martyrs of the Chinese People's Volunteer Army at the Friendship Tower, visited the exhibition hall of the tower and wrote down in the inscription book that "To remember the martyrs" and "The China-DPRK friendship lasts from generation to generation."

During the visit, Xi said the China-DPRK relationship has entered a new historical era while Kim said Xi's visit has turned a new and splendid page in the DPRK-China friendship.

The two leaders jointly blueprinted in detail a future of the bilateral relationship and agreed to take commemorating the 70th anniversary of diplomatic ties as an opportunity to expand practical cooperation and deepen friendly exchanges, according to Song Tao, head of the International Department of the CPC Central Committee.

In face of the profound and complex changes on the global and regional landscapes, China and the DPRK should strengthen high-level contact to guide the development of China-DPRK relations, Xi said Thursday.

China, he said, is ready to work with the DPRK to continue to implement the plan for commemorating the 70th anniversary of diplomatic ties, and conduct exchanges and cooperation in such fields as education, health, sports, media and youth as well as at local levels, so as to carry forward the traditional China-DPRK friendship and improve the well-being of both peoples.

For his part, Kim said that it is an unswerving policy of the DPRK's party and government to carry forward the DPRK-China friendship from generation to generation.

At present, the party and people of the DPRK are making every effort to implement the new strategic line, Kim said, adding that his country is willing to learn more from China's experience and endeavor to develop the economy and improve people's livelihood.

As Xi said, the situation of the Korean Peninsula concerns regional peace and stability and a bright prospect of resolving the issue through dialogue has appeared over the past year, which has gained recognition and raised expectations of the international community.

During his visit, Xi spoke highly of the DPRK's efforts to promote the denuclearization of the peninsula and re-launch the process of political settlement to the issue, stressing that China is ready to strengthen communication and coordination with the DPRK and other related parties on the issue so as to safeguard peace, stability and prosperity in the region.

The DPRK is willing to stay patient, and hopes that the relevant party will work with the DPRK to seek solutions that accommodate each other's legitimate concerns and push for results from the dialogue process, Kim said.

The DPRK highly appreciates the important role played by China in solving the Korean Peninsula issue, he said, adding that his country is ready to continue to strengthen communication and coordination with China to strive for new progress in the political settlement of the issue and safeguard peace and stability on the peninsula.

Lee Hee-ok, a professor of political science at Sungkyunkwan University in Seoul said that Xi's visit contributes to regional peace and stability in the long run.

Likewise, Duncan Freeman, a research fellow at the College of Europe in Bruges, Belgium, said that Xi's visit reflects the relationship that China has with the DPRK and the importance of China resolving the security problems in the Korean Peninsula.

"China is absolutely critical to the security of the region," he added.