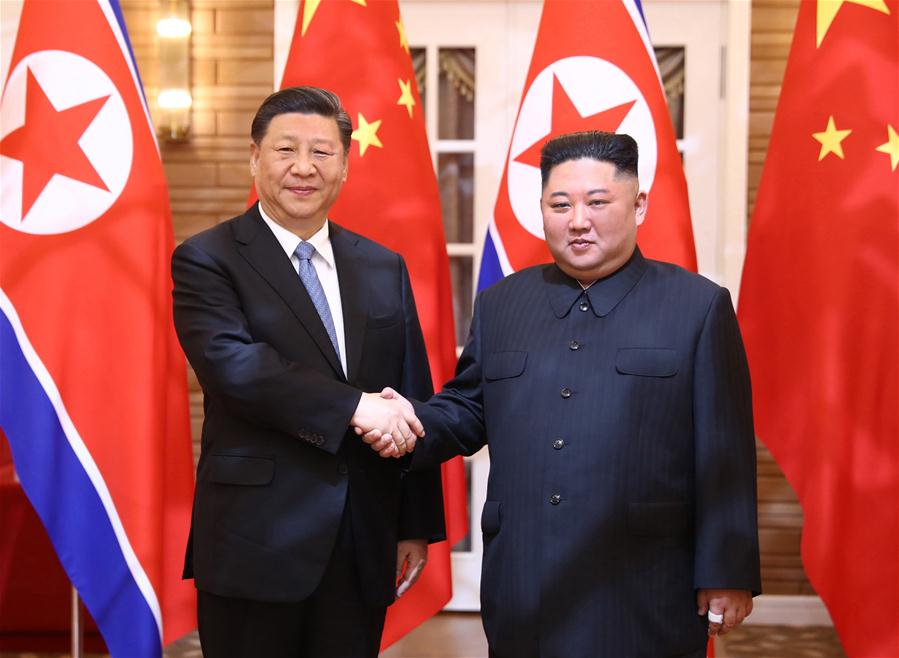 Xi Jinping, general secretary of the Central Committee of the Communist Party of China (CPC) and Chinese president, holds talks with Kim Jong Un, chairman of the Workers' Party of Korea (WPK) and chairman of the State Affairs Commission of the Democratic People's Republic of Korea (DPRK), in Pyongyang, DPRK, June 20, 2019. (Xinhua/Ju Peng)

PYONGYANG, June 20 (Xinhua) -- The top leaders of China and the Democratic People's Republic of Korea (DPRK) agreed here Thursday that the two countries should stay true to their original aspirations and join hands to create a bright future of inter-party and inter-state relations at a new starting point in history.

The agreement was reached in talks between Xi Jinping, general secretary of the Central Committee of the Communist Party of China (CPC) and Chinese president, and Kim Jong Un, chairman of the Workers' Party of Korea and chairman of the State Affairs Commission of the DPRK.

Xi noted that since last year he and Kim had met four times, opened a new chapter for China-DPRK relations, and forged a profound friendship.

The Chinese leader thanked Kim for the grand and rousing welcome ceremony, adding that he could feel the family-like friendship between the two peoples all along the way from the airport to the state guest house.

This year marks the 70th anniversary of China-DPRK diplomatic relations, and bears great significance as it allows the two parties and two countries to build on past achievements and continue to forge ahead, Xi said, adding that it is against such a backdrop that he is meeting with Kim in Pyongyang.

Xi said his visit is aimed at consolidating and carrying forward the China-DPRK friendship and at advancing the political settlement process of the Korean Peninsula issue.

He added that he is confident that China and the DPRK, by taking the opportunity of the visit, will jointly blueprint a bright future of the bilateral relationship and open a new chapter of the China-DPRK friendship.

By reviewing the development of China-DPRK relations, an insightful conclusion can be drawn that it is the essential attribute of the relationship that both are socialist countries adhering to the leadership of a Communist party, Xi stressed.

Shared ideals, beliefs and goals are the driving force of the relationship, the continuous friendship between and strategic guidance by top leaders are the greatest strength, and the geographical proximity and cultural affinity offer a sturdy bond, he added.

The China-DPRK friendship is a strategic choice made by the two sides with a long-term and overall perspective and will not waver due to changes in the international situation, Xi said, adding that the friendship accords with the aspirations of both peoples, the fundamental interests of both countries and the development trend of the times.

In face of the profound and complex changes on the global and regional landscapes, China and the DPRK should strengthen high-level contact to guide the development of China-DPRK relations, Xi said, adding that he is ready to maintain close exchanges with Kim to consolidate mutual political trust and hold firmly the general direction of bilateral relations.

The two sides, Xi said, should deepen strategic communication and exchange views on major issues in an in-depth and timely manner, so as to create a favorable environment for the development of both countries.

He also suggested that the two sides expand practical cooperation to bring more benefits to both peoples.

China is ready to work with the DPRK to deepen inter-party exchanges on governance experience, and boost cadre training and personnel exchanges in economic and well-being areas, he said.

The Chinese leader also urged the two sides to deepen friendly exchanges to lay a solid foundation for further consolidating and developing the China-DPRK friendship.

China, he said, is ready to work with the DPRK to continue to implement the plan for commemorating the 70th anniversary of diplomatic ties, and conduct exchanges and cooperation in such fields as education, health, sports, media and youth as well as at local levels, so as to carry forward the traditional China-DPRK friendship and improve the well-being of both peoples.

For his part, Kim expressed a hearty welcome to Xi's visit on behalf of the party, government and people of the DPRK, noting that more than 250,000 people flocked to the streets in Pyongyang to welcome Xi.

The visit, which comes upon the 70th anniversary of bilateral diplomatic ties, represents a huge encouragement and political support for the party, government and people of the DPRK, and bears great significance in the history of DPRK-China relations, he added.

Under current circumstances, said the DPRK leader, Xi's visit helps review the past 70 years of DPRK-China relations, envisage the future of bilateral ties, and demonstrate to the world the unbreakable traditional friendship between the two countries.

Kim said that he fully agrees with the insightful analysis and future plan Xi made on bilateral relations, and that it is an unswerving policy of the DPRK's party and government to carry forward the DPRK-China friendship from generation to generation.

He added that he highly values the profound friendship he has formed with Xi, and attaches great importance to the important consensus he has reached with the Chinese leader.

He expressed his willingness to take Xi's visit as an opportunity to further strengthen strategic communication between the two sides, deepen friendly exchanges in various areas, and lift the DPRK-China relationship to a new height.

Noting that this year marks the 70th anniversary of both the establishment of China-DPRK diplomatic ties and the founding of the People's Republic of China, Kim said the DPRK is ready to hold extensive and warm celebrations with China.

At present, the party and people of the DPRK are making every effort to implement the new strategic line, Kim said, adding that his country is willing to learn more from China's experience and endeavor to develop the economy and improve people's livelihood.

On the Korean Peninsula issue, Xi reaffirmed China's support for efforts to push forward the political settlement process and build up conditions for its resolution.

Xi spoke highly of the DPRK's efforts to safeguard peace and stability on the Korean Peninsula and promote the denuclearization of the peninsula.

The situation of the Korean Peninsula concerns regional peace and stability, Xi pointed out, noting that a bright prospect of resolving the issue through dialogue has appeared over the past year, which has gained the recognition and raised expectations of the international community.

The international community hopes that talks between the DPRK and the United States will move forward and bear fruit, Xi added.

Stressing that the Korean Peninsula issue is highly sensitive and complex, Xi said a strategic and long-term perspective is needed to accurately guide the evolution of the situation and effectively maintain peace and stability on the peninsula.

China, Xi said, is willing to provide assistance within its capacity for the DPRK to address its legitimate security and development concerns, strengthen coordination and cooperation with the DPRK as well as other relevant parties, and play a positive and constructive role in achieving denuclearization of the Korean Peninsula and long-term stability in the region.

For his part, Kim said that over the past year, the DPRK has taken many active measures to avoid tensions and control the situation on the Korean Peninsula, but has not received positive responses from the party concerned, which the DPRK does not want to see.

The DPRK is willing to stay patient, and hopes that the relevant party will work with the DPRK to seek solutions that accomodate each other's legitimate concerns and push for results from the dialogue process, Kim said.

The DPRK highly appreciates the important role played by China in solving the Korean Peninsula issue, he said, adding that his country is ready to continue to strengthen communication and coordination with China to strive for new progress in the political settlement of the issue and safeguard peace and stability on the peninsula.

Xi arrived in Pyongyang earlier Thursday for a state visit to the DPRK. The visit, Xi's first as CPC chief and Chinese head of state and also the first of its kind in 14 years, came as the two neighboring countries are celebrating the 70th anniversary of their diplomatic ties.