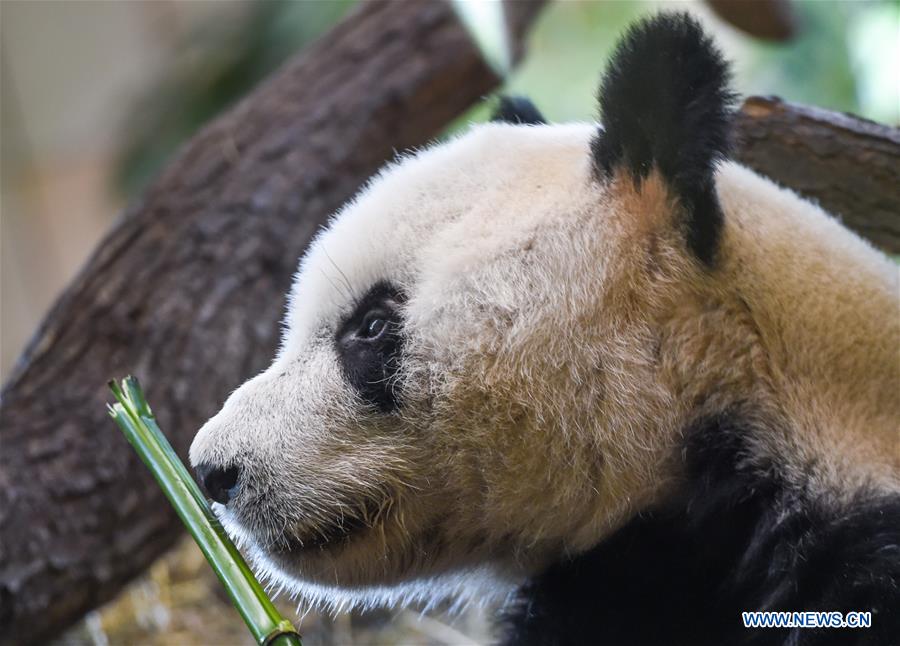 VIENNA, May 20 (Xinhua) -- Among the many enthusiastic fans snapping shots from behind the thick glass window of the panda house in the Schönbrunn Zoo Monday afternoon, an old lady seemed rather different. She just sat there quietly, watching the panda with a tender, loving smile, for a long time.

Her name is Bertha. She and her husband drove 60 kilometres to see the new panda, and it is the second time that they came to visit the panda house this year. "I love this one, he is very handsome," she said.

The said panda is called Yuan Yuan, a 19-year-old male who has been in Vienna since mid-April and quarantined for a month before visitors could take a look at him. The zoo hopes that he would build a family with the 18-year-old female Yang Yang, who has been living here since 2003 but without a companion as her previous partner, Long Hui, died of cancer in 2016.

Yuan Yuan was officially handed over to the zoo in a grand ceremony held in the Kaiserpavillon on Monday morning.

Speaking at the event, Austrian President Alexander Van der Bellen said the Chinese-born pandas have "a certain diplomatic mission" to fulfil as he regarded them a "symbol of friendship" between the two countries. "We really appreciate it, Yuan Yuan is in good hands here."

The Austrians adore pandas, said Van der Bellen. There are two million visitors to the zoo every year, and many of them are fascinated by this rare and magnificent animal. "Kids adore them -- not just kids, all Austrians do -- they would wait in queues just to have a look at the pandas. But they are not tall enough to have a better view. So they would come again," said the president.

In April last year, Van der Bellen and Chancellor Sebastian Kurz asked for a new partner for Yang Yang during their state visit to China. In December 2016, the president also visited the zoo to personally say goodbye to the panda twins before they left for China. He was very pleased that the Austrian panda success story could now continue. "I am very happy about the panda addition in Schönbrunn. I hope Yuan Yuan will feel comfortable with us."

Minister of Economy Margaret Schramböck was also very pleased with the arrival of Yuan Yuan. "China not only connects us with strong trade relations, but also our common love for giant pandas," she said at the ceremony. "The unexpected death of our panda male Long Hui in December 2016 was very sad, so we are all the happier that we now get a new panda male with Yuan Yuan."

"The high quality of panda care is known far beyond our borders and is ensured by the excellent work of the zookeepers of the Schönbrunn zoo. I am convinced that Yuan Yuan will feel at home with us and become a magnet for many visitors from near and far," she added.

In addition to the studbook number, birth place and time, the documents handed over to the minister also include the personalities of the male panda: gentle and clever. He had settled in well since his arrival and gained some weight, according to Zoo Director Dagmar Schratter. The pair already eyed each other up through a glass. "He was very interested, but it will take a while until they can get together," said the minister.

Since 2003, the Schönbrunn Zoo has been one of the few zoos in the world where giant pandas live. The endangered bears are the symbol of species protection par excellence. In Schönbrunn there have already been four offsprings, always the natural way. In 2016, there were even twins.

"With Yang Yang and Long Hui, our Chinese colleagues had chosen a very harmonious couple back then. We are very grateful that once again, with such care, a male has been chosen that fits genetically and in terms of age perfectly with Yang Yang and also has breeding experience," said Schratter.

"I saw the cubs a few years ago. They were so huggable," said Bertha. "I hope the new pair will be successful in building a family in Vienna."