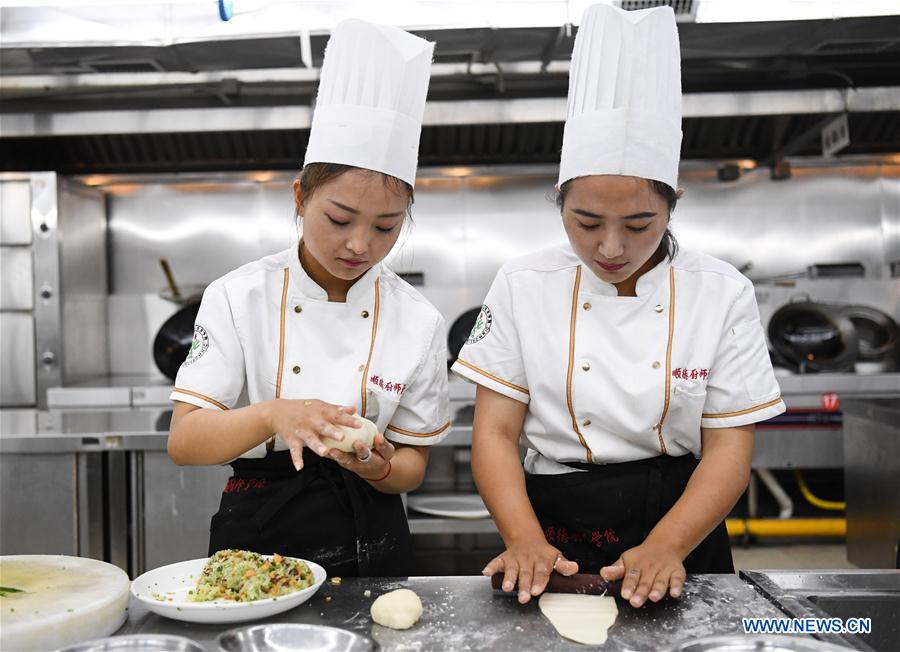 Steaming, stir-frying, boiling, charcoal grilling, and braising, Cantonese cuisine, one of the four major Chinese cuisines, has been using a variety of seemingly simple methods to keep the natural flavors of the ingredients for hundreds of years.

The culinary style is now glowing with new vitality as south China's Guangdong Province is making efforts to promote Cantonese cuisine training as a way to boost employment and fight poverty.

THE ROAD TO FORTUNE

Lei Kalin, 46, had been working outside his hometown for nearly 20 years. But he decided to return to his hometown of Wangtong Village in the city of Xinyi when he heard about the Cantonese cuisine chef training class last year.

He soon mastered the skills of cooking more than 100 Cantonese dishes and 10 local specialties after a one-month course.

With the confidence gained from his newfound cooking skills and some of his savings, he bought a share in a local restaurant.

The Cantonese dishes made by Lei soon attracted customers to the restaurant, bringing in an annual profit of more than 700,000 yuan (about 101,300 U.S. dollars).

This year, Lei has sent the apprentice chefs at the restaurant to take the training course too.

"Those who are registered as living below the poverty line also receive subsidies for food, housing and transportation," Li said. "After the training, qualified students will receive certificates with which they will be able to find jobs with a salary of 4,000 to 5,000 yuan per month, 1,000 to 2,000 yuan higher than what they earned in the past."

So far, 147 vocational schools have opened Cantonese cuisine courses in the province, with 56,000 current students. The course has been taken around 15,000 times over the past year.

With start-up subsidies and loans, some have also opened restaurants and started businesses of their own and found a way towards fortune.

THE POWER OF COOKING

Shunde District in the city of Foshan, which is well-known for good food and chefs, is one of the most popular places for Cantonese cuisine.

A total of 103 young trainees from three national poverty-stricken counties in southwest China's Sichuan Province -- Meigu, Leibo and Jinyang -- came to Shunde this year, taking a huge step to shake off poverty and change their lives.

In a white uniform and a tall chef's hat, Mahai Yangzi gets excited when talking about her chef dream, though it took her more than 30 hours by bus to get here.

"In my hometown, there aren't many female chefs because people think we are too weak to lift iron pots. But I want to learn how to cook and become a chef, to give my family a better life," the 25-year-old woman said.

Mahai and her classmates will receive free systematic cooking lessons for two months at the Shunde Culinary Institute and will have access to restaurant internships organized by the institute. After the training, they can choose to work in Shunde or return to their hometown, according to Gan Muyi, a senior official with the institute.

"Taught by masters in Shunde, the students will not only learn how to cook traditional Cantonese dishes such as stir-fried milk and stuffed mud carp but also innovate techniques combining Cantonese cuisine with Sichuan flavor, which is spicy, helping them become more competitive when going back to Sichuan," Gan said.

Guangdong started the Cantonese cuisine training program in 2018. This year, the province will invest more than 20.8 billion yuan to help unemployed people find jobs, with priority given to the cooking program, according to a meeting on the province's human resources and social security.

"Programs like this drive big change," said Yang Hongshan, deputy head of the provincial human resources and social security department. "In the exquisite Cantonese dishes, we can also taste the sweet benefits of poverty alleviation."