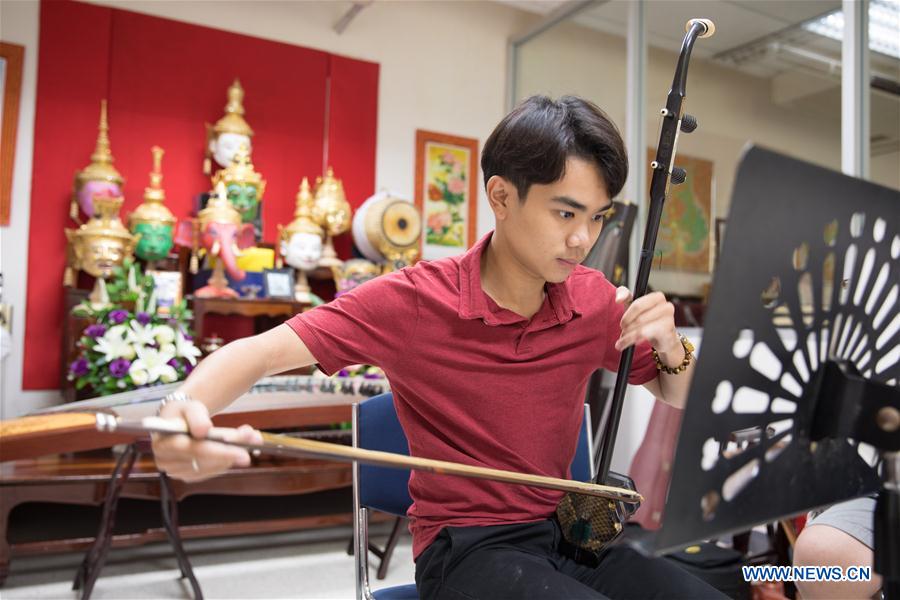 Pakkawat plays the Erhu with his friends of "Tianxian" Band in a classroom in Huachiew Chalermprakiet University in Bangkok, Thailand, March 10, 2019. Thai band "Tianxian", literally meaning "heavenly strings", are consisted of several Thais who are crazy about Chinese musical instruments. Strange enough, however, none of them can speak fluent Chinese. In the Thai society where western musical instruments take dominant, a band featuring Chinese musical instruments is nothing but a rare thing. Sanchai, one of the band members, is a music teacher at Huachiew Chalermprakiet University and he crushed on Chinese Zither several years ago while studying Thai folk music. He then learned playing Chinese Zither with a Chinese teacher for three years in Bangkok and by doing so he got to know more people of mutual interests. At a small Chinese musical instrument shop SW Chinese Music Center in Bangkok, Sanchai and his fellow band members often play Chinese music pieces with great joy. Other band's members include bamboo flute player Arthit who works as a photographer, an Erhu player Pakkawat who majors in saxophone, and car repairer Chalotorn who also likes to collect and repair musical instruments. "The beauty of Chinese folk music attracts us so much because the music is a common language," said Sanchai. (Xinhua/Zhang Keren)