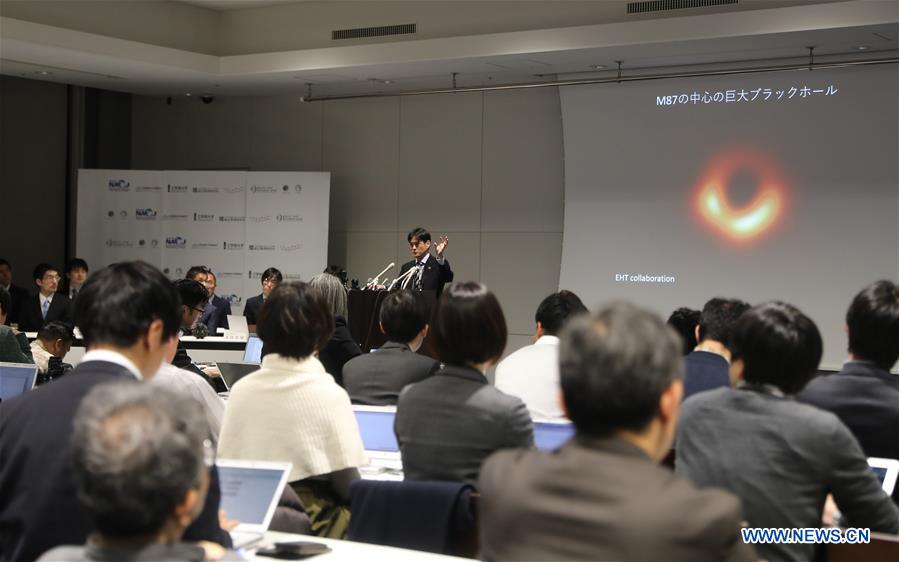 Mareki Honma, a professor of the National Astronomical Observatory of Japan (NAOJ), shares information about the first-ever image of a black hole at press conference in Tokyo, Japan, April 10, 2019. The first photo successfully taken of a black hole was revealed on Wednesday by the Event Horizon Telescope (EHT) in Tokyo, Japan along with other five cities worldwide. (Xinhua/Du Xiaoyi)

TOKYO, April 10 (Xinhua) -- The first photo successfully taken of a black hole was revealed on Wednesday by the Event Horizon Telescope (EHT) in Tokyo, Japan along with other five cities worldwide.

In a press conference held late at night, Mareki Honma, a professor of the National Astronomical Observatory of Japan (NAOJ) released the photo at 22:07 local time on behalf of his team in Japan.

According to Honma, a shadow exists in the middle of the black hole located in the center of the m87 galaxy, and observing the shadow is like seeing a tennis ball on the Moon from the Earth.

Multiple calibration and imaging methods have revealed the ring-like structure with a dark central region, the black hole's shadow, that persisted over multiple independent EHT observations, according to the EHT.

Honma said that the ring-shaped black hole has a diameter of around 100 billion km and the surrounding superheated ions radiate an electromagnetic wave that is over 6 billion degree Centigrade.

He said this is the first time the prediction, made by the general relativity, that light cannot escape a black hole was proven true with a picture. The research result will open up a new era of astronomical study of the black hole.

Kazuhiro Hada, a teaching assistant at the NAOJ, said that the picture provided the first-ever visual evidence of the black hole's existence and warping of spacetime.

It also visually proved the physical law in a strong gravitational field and is a significant achievement since the theory of general relativity was proposed, Hada said.

He said that the researchers from Japan and east Asia played an important role in the research, including efforts in locating the black hole and the formation of the theory of jet stream.

"Black holes are extraordinary cosmic objects with enormous masses but extremely compact sizes. The presence of these objects affects their environment in extreme ways, warping spacetime and super-heating any surrounding material," said EHT on its official website.

According to the National Aeronautics and Space Administration of the United States, black holes are made up of huge amounts of matter squeezed into a small area, thus creating a massive gravitational field which draws in everything around it including light.

The EHT observations use a technique called very-long-baseline interferometry (VLBI) which synchronizes telescope facilities around the world and exploits the rotation of planets to form one huge, Earth-size telescope observing at a wavelength of 1.3 mm, the organization said.

The construction of the EHT and its observations represent the culmination of decades of observational, technical, and theoretical work, according to the EHT.

This example of global teamwork required close collaboration by researchers from around the world. Thirteen partner institutions worked together to create the EHT, using both pre-existing infrastructure and support from a variety of agencies, the EHT said.