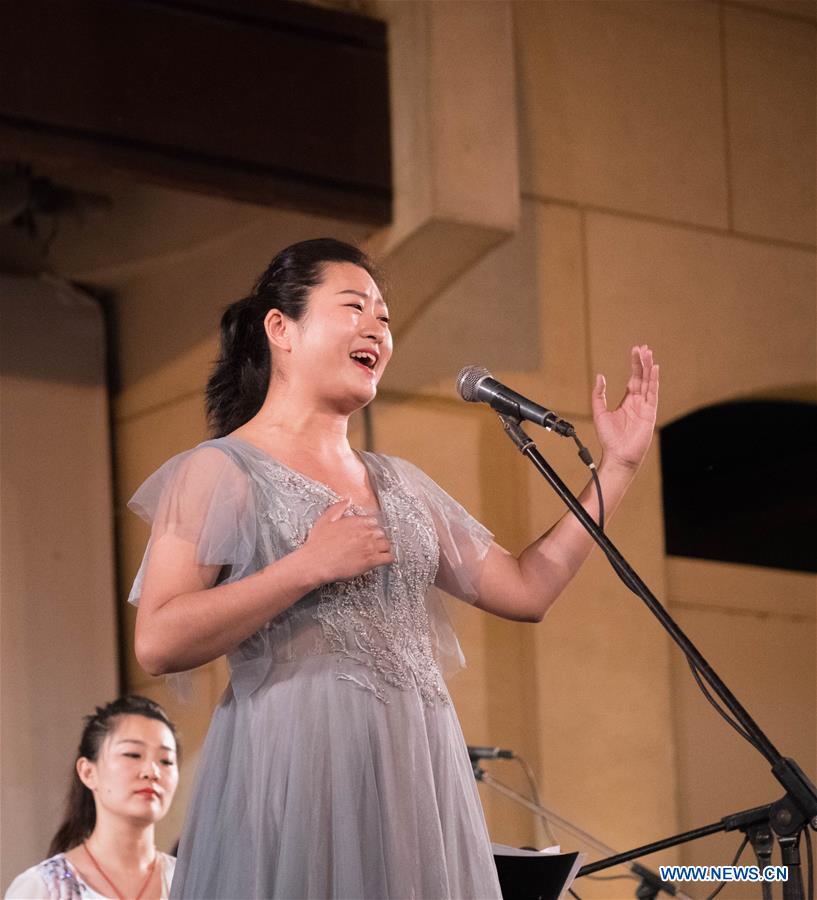 An artist from Jiangsu Women's Traditional Orchestra performs at the Cairo Opera House in Cairo, Egypt, April 8, 2019. At Egypt's renowned Cairo Opera House, a Chinese musical band played traditional Chinese and Egyptian music on Monday, winning applause of the audience. The show was part of the seventh edition of the Damanhour International Folk Festival, which lasts to April 11. (Xinhua/Wu Huiwo)

The show was part of the sixth edition of the Damanhour International Folklore Festival, which lasts from April 6 to 11.

The festival, which hosts 26 Arab and foreign bands from 13 countries, extended for the first time from Beheira province in Delta to Cairo and Alexandria.

The open air theatre at the Cairo Opera House was packed with Chinese and Egyptian audiences who enjoyed the festive and famed Chinese folk melodies performed by artists from Jiangsu Women's Traditional Orchestra, which is the first professional women orchestra that performs traditional Chinese folk music.

The famous band has previously played in countries, including the Neitherlands, Australia, Lebanon, and Morocco.

"I'm a musician and I really admired what the Chinese band has performed," said the girl, who came to the concert with her parents.

Ahmed said there are many similarities between the Egyptian and Chinese music as they use similar instruments and musical scales.

Her father, Ahmed Mahmoud, who learns Chinese at the Chinese Cultural Center in Cairo, said he liked the performance of an old Egyptian musical piece.

"They Chinese artists played the piece skillfully. It was a pure Egyptian music with a Chinese soul," Mahmoud said.

The man added that the performance showed that music is a common language between different cultures and a strong bridge linking the people of the globe.

Cultural exchanges benefited from China and Egypt upgrading their relations to a comprehensive strategic partnership in 2014, with artists, cultural and musical delegations paying mutual visits.

Through such moves, both countries want to boost friendly ties and enhance mutual understandings and future development.

Ge Chengli, deputy director-general of Lianyungang's Culture, Radio, Television and Tourism Bureau, said the orchestra's participation in the festival is meant to enhance cooperation between China and Egypt.

"We're able to know more about the Chinese culture and the Egyptian audience can know what Chinese folk music is like," he told Xinhua. "Through folk music, we can tell the story of China to the world."

He added that the performance is meaningful under China's Belt and Road Initiative, stressing that Egypt is one of the most important Belt and Road countries.

Yan Yan, chief performer of the orchestra, said the music and songs performed at the festival are well-known in China, such as the Jasmine Flower.

"We can feel the passion of the audience. We hope to study more Chinese folk music, in order to make our performance more joyful for the audience," she told Xinhua.