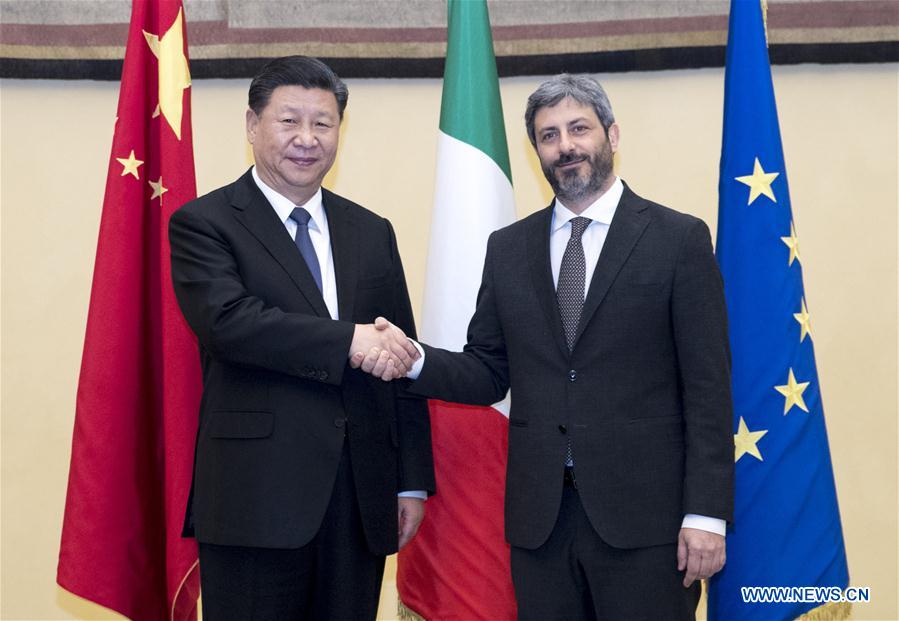 Xi said that with the concerted efforts of both countries, China-Italy ties have always taken the lead in the relations between China and European Union (EU) countries.

China and Italy can achieve a long-term development of friendly relations mainly because they share similarities in history, reality and future, Xi said.

Looking back into the past, China and Italy had no problems left over by history or conflicts of fundamental interests, he said, adding that the ancient Silk Road has linked the two countries together since long ago.

Looking at today, with the world undergoing profound changes unseen in a century, China and Italy are both staunchly safeguarding the existing international rules and actively pushing for the building and reform of the international system, Xi said.

The two sides are carrying out mutually beneficial economic cooperation and enjoy a broad prospect of Belt ad Road cooperation, he said.

Looking to the future, both countries are committed to achieving their dream of great national rejuvenation, safeguarding multilateralism and building a community with a shared future for humanity, Xi said.

Noting that exchanges and cooperation between legislative bodies are an important channel for the two peoples to enhance mutual understanding and deepen friendship, Xi said that China supports the legislatures of the two countries in deepening experience sharing on lawmaking and governance, especially in doing more work for the economic and financial cooperation as well as the cultural and people-to-people exchanges between the two countries.

He said he hopes the Italian Chamber of Deputies creates sound legal and policy conditions to facilitate bilateral practical cooperation and personnel exchanges.

For his part, Fico said that in the era of globalization, all countries are dependent on each other, therefore they should join hands to address global issues.

China is an important cooperation partner of Italy, he said, noting that he believes President Xi's visit will lift bilateral relations to a higher level.

The Italian Chamber of Deputies is committed to promoting economic, trade and cultural exchanges and cooperation between Italy and China within the framework of the Belt and Road Initiative, strengthening communication and coordination on global affairs including tackling climate change and implementing the 2030 Agenda for Sustainable Development, and helping the EU deepen its cooperation with China, he added.

Xi arrived in Rome on Thursday for a state visit to Italy, the first stop of his three-nation Europe tour, which will also take him to Monaco and France.