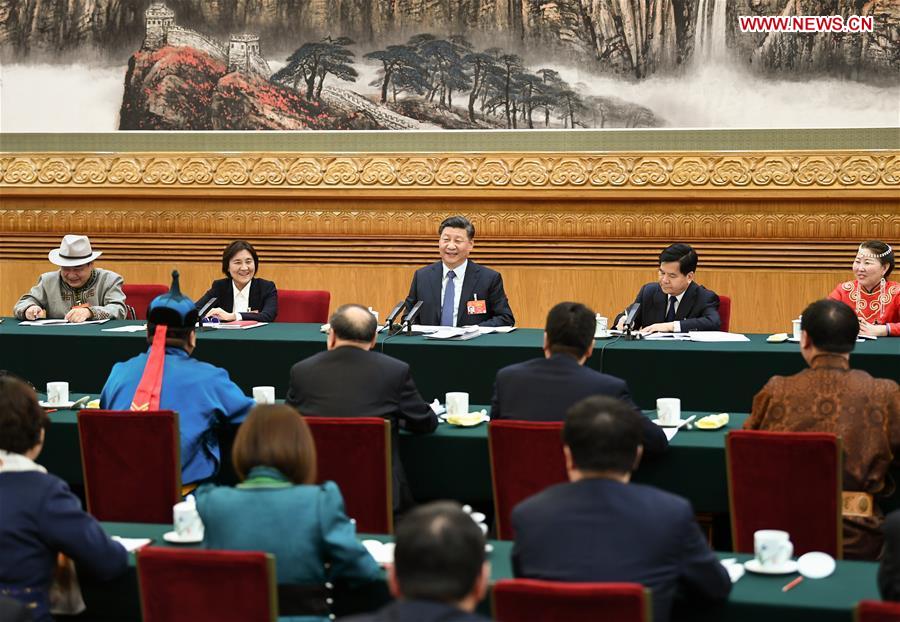 BEIJING, March 5 (Xinhua) -- President Xi Jinping on Tuesday stressed efforts to maintain strategic resolve in enhancing the building of an ecological civilization and to protect the country's beautiful scenery in the northern border areas.

Xi, also general secretary of the Communist Party of China (CPC) Central Committee and chairman of the Central Military Commission, made the remarks when attending a panel discussion with his fellow deputies from Inner Mongolia Autonomous Region at the second session of the 13th National People's Congress, China's national legislature.

The president called for intensified protection of the ecological system, urging people to fight resolutely against pollution.

The Party's theory on an ecological civilization has been constantly enriched and improved since the 18th CPC National Congress in late 2012, Xi said.

All localities and departments should earnestly implement the Party's arrangement and requirements for building an ecological civilization, pushing it to a new level, Xi said.

Building Inner Mongolia into an important shield for ecological security in northern China is a strategic position set with full consideration of the country's overall development and a major responsibility the region must shoulder, Xi said.

Fundamentally speaking, environmental protection and economic development are closely integrated and complement each other, Xi said.

In the Chinese economy's transition from the phase of rapid growth to a stage of high-quality development, pollution control and environmental governance are two major tasks that must be accomplished, he added.

The country should explore a new path of high-quality development that prioritizes ecology and highlights green development, Xi said.

With its diversified natural forms including forests, grasslands, wetlands, rivers, lakes and deserts, Inner Mongolia features a comprehensive ecological system formed over a long period of time. Integrated measures should be taken in ecological protection and rehabilitation in the region, he said.

Xi underlined a resolute and effective fight to prevent and control pollution, saying prominent environmental issues the people are strongly concerned about must be addressed properly.