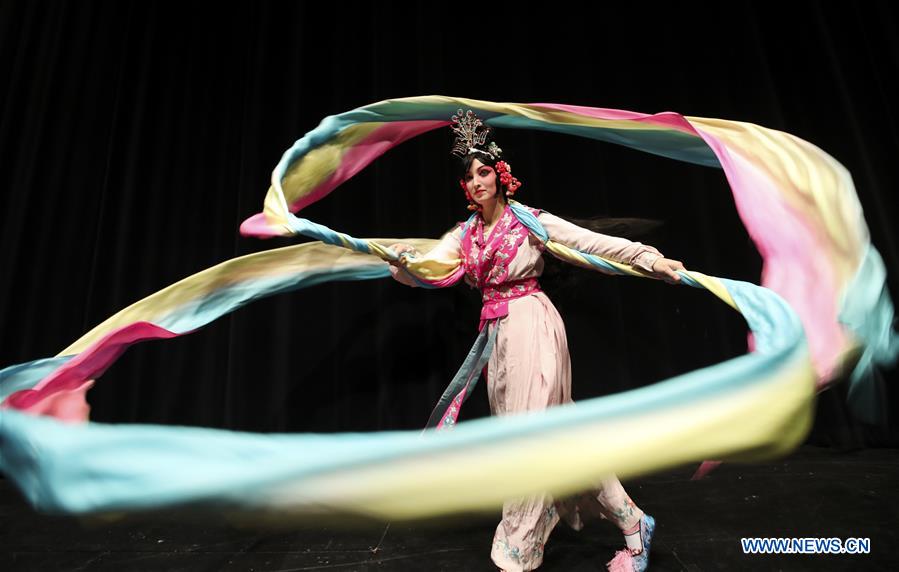 Carrie Feyerabend dances with Shuixiu, literally Water Sleeves, one of the most skillful stunts in Peking Opera, during a rehearsal at Binghamton University (BU) in Binghamton, New York State, the United States, on Nov. 15, 2018. Feyerabend is one of the U.S. and Chinese artists from the Confucius Institute of Chinese Opera (CICO) at Binghamton University (BU) who were featured in the incredible show of the "Amazing Chinese Opera" in mid-November as the closing event of the university's International Education Week, an annual initiative to celebrate and promote international education and exchange. (Xinhua/Wang Ying)

NEW YORK, Dec. 29 (Xinhua) -- Joe Sinicki would have mistaken Carrie Feyerabend as a Chinese performer, had he not watched on the spot her presentation of an excerpt of song and dance from Peking Opera classic The Heavenly Maid Scatters Blossoms at a recent show in the State University of New York at Buffalo.

"She did pretty well. If I didn't see her, I thought she was maybe a Chinese girl," said Sinicki, who is a fan of the most influential Chinese drama form, in an interview with Xinhua.

"It was cool. I like it. It's very abstract. There's a lot of symbolism," said Sinicki, who was enthralled by Feyerabend's superb dance with Shuixiu, literally Water Sleeves, one of the most skillful stunts in Peking Opera.

Shuixiu refers to the extra-long dancing sleeves attached to the cuffs of a costume, which are used to perform various movements. There are hundreds of gesticulations in Shuixiu dancing, such as sleeves quivering, throwing and wigwagging.

NEARLY 100 PERFORMANCES ACROSS U.S. EACH YEAR

Feyerabend is one of the U.S. and Chinese artists from the Confucius Institute of Chinese Opera (CICO) at Binghamton University (BU) who were featured in the incredible show of the "Amazing Chinese Opera" in mid-November as the closing event of the university's International Education Week, an annual initiative to celebrate and promote international education and exchange.

Founded in 2009, the BU's CICO is the first such place in the United States to offer Chinese Opera lessons through cooperation with the National Academy of Chinese Theater Arts (NACTA) in Beijing, while supplying tools and support for teaching Chinese language and culture.

Brought up in Skaneateles, a small town deeply locked in New York State, Feyerabend studied Peking Opera in Beijing and now serves as an assistant to CICO director and is the only U.S. member of CICO's eight-people troupe.

The 26-year-old soft-spoken lady described herself as "a Jack of all trades" because she played multiple roles of the Master of the Ceremony, Peking Opera performer and artistic director at almost each and every CICO show.

"I really enjoy playing that role," she told Xinhua. "I really like being behind the stage and helping people make sure that they have a good performance. I'm just so proud of the work that they do. It's fun to watch every single time they make it look effortless."

Apart from the on-stage work, Feyerabend helps in designing the troupe's repertoire. So far, the troupe has staged nearly 100 performances, leaving their footprints in more than 30 U.S. states since CICO was founded in 2009.

The troupe normally puts together three to five Peking Opera acts, and fills the space with the musicians, such as a vocalist, a flutist and/or a player of Guzheng, the Chinese zither.

In order to better entertain the local audience who have limited knowledge of Chinese culture, Feyerabend and her colleagues seek to do a good mix of music and Peking Opera, and give variations of different scenes from opera plays, while making an individual opera act no longer than 10 minutes.

"For example last year we had a Huayi (vivacious young female character), so we did some things like 'Mudan Tian', or 'The Peony Garden.' This time we have a Wudan (female character who specializes in fighting with ancient Chinese weapons), so we have 'Hujia Zhuang' (the Hu Village), because that's her specialty," she said.

Feyerabend has been working for CICO for more than three years. A large part of her job is preparation work to ensure that all is set for the troupe to perform across the country.

"It's an administrative role, so there's a lot of paperwork that goes on behind the scenes," she said. "But being able to help out backstage logistically is really great when everything flows and goes right. So I know that I've put that together and had a hand in that. It makes me feel like I've done a good job."

"CICO is the one and only Confucius Institute named after Peking Opera among its over 100 counterparts in the U.S.," said CICO director Chen Zuyan. "Our courses are fully integrated into the university's academic system."

"That helps us be able to take American students who wouldn't otherwise know about this culture or anything it has to offer," Feyerabend added. "So then they can come to appreciate it in a more organic way as they grow up in an environment that's already inclusive and accepting of that culture."

Justina Baez, a biology sophomore who chose Peking Opera face painting course, told Xinhua that she was "caught off guard" the moment her Monkey King mask painting was complete.

"Oh my God, like my face just transformed. How did that happen?" Baez said with a laugh. "It definitely takes you into another culture and I think that's really cool. Being able to embrace a culture that's not really yours through face painting, I really like it."

The real significance of such classes, Feyerabend believes, lies in the fact that "they can fuel passion and also help mutual understanding develop."

"So people aren't bigoted by the fact that they don't know," she noted. "To be able to foster those with the Confucius Institute, it's really great."

CICO also holds outreach events throughout the year in large shopping malls and schools in other states, including Peking Opera shows, interactive workshops and exhibitions.

"What I always like to do is to have our teachers do the face painting and the hair (for Peking Opera performers) out in the open before they can do the performance," Feyerabend said. "People can really see the whole process, because it takes a long time."

In a recent exhibition CICO did at a local high school in the state of Montana, where they interacted with a group of theater students and then extended the event from one hour to two.

The feedback of the local students impressed Feyerabend. "Some of the feedback we got from the students was if you think something is weird to begin with, still try it, because it's probably going to be fine. So they really enjoyed that," she said.

Some of the students told her they would share the new skills with their parents. "So it's a good way to inter-generationally share the culture and a more organic way than just sitting in a classroom."

Actually, CICO regularly holds workshops at neighboring high schools in a bid to inspire more teenagers to "set their own goal to have something similar happened to them."

"If they put in hard work, then it can happen. So I think it's a really special thing for them to be able to look at this and to say okay that's achievable, I can do this too," she said.

Despite her major in Spanish at BU, Feyerabend chose to learn Chinese, because, as she put it, "it was a difficult language and she wanted to challenge herself."

Standing out for her excellence, CICO picked Feyerabend to participate in Chinese Bridge, or the Chinese Proficiency Competition for Foreign College Students, for three times, from which she obtained two opportunities to study in China.

The second time she participated in the beginners round in the United States in her sophomore year, she won first place and gained the opportunity to go to China to study Peking Opera at NACTA for a semester.

That unique experience laid a solid foundation for her Chinese Bridge contest the following year and Peking Opera performing.

"Going to NACTA and being able to study with those teachers and using those new skills in the upper level competition the following year was really a nice progression for me. I could feel myself growing both in my speaking and in my stage presence," she said.

After she won the senior level round in the United States, she went to compete in Changsha, capital city of central China's Hunan Province.

There she won the Confucius Institute scholarship, which she ended up studying a year later at Xiamen University, a time-honored comprehensive institution of higher learning in southeast China's Fujian Province.

According to Feyerabend, learning Chinese culture has not only facilitated her interacting with Chinese people, but also helped her connect with people from all over the world.

"It's definitely an interesting starting point of conversation, especially with Chinese coworkers and people that I've met since I've been in this position," she said.

The Confucius institutes in the United States are a fantastic resource for students to go beyond the classroom, interact with Chinese teachers and learn about different aspects of Chinese culture, she said.

"That's something you can do only if you have a hands-on experience, and people who can offer these resources give you a chance and a willingness to take maybe a painting class or a Peking Opera class, or learn calligraphy," she said.